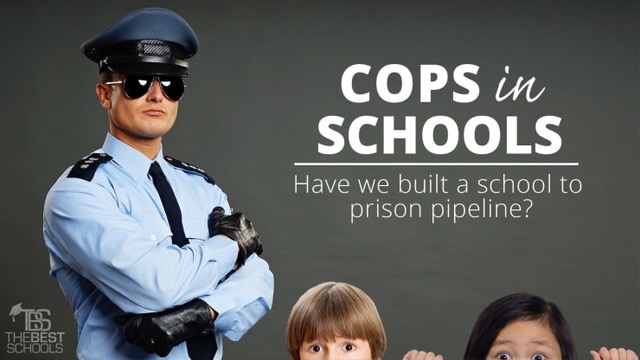 A middle school child was handcuffed and charged with assault and battery with a weapon after she threw a baby carrot at a teacher.

A tenth-grade girl was tackled to the ground by three school police, held facedown with a knee on her back and handcuffed. Her “crime?” Calling her mother on her cell phone —a violation of school rules.

A police officer restrained an 11-year-old girl by forcing her arms behind her back, pushing her into a wall and slamming her to the ground. Her “crime?” She had taken an extra carton of milk from the cafeteria.

Since January, 2016, students have been body slammed, tackled or choked by school-based cops at least 32 times.

Reading these tales of unimaginable cruelty and viciousness, you’re probably wondering what misbegotten society tolerates this savagery in the name of law and order. Would it surprise you to learn that these obscenities are part and parcel of growing up in the exceptional nation, the world’s sole superpower, the U.S.A.

But then again, the number of people of any age killed by a cop in the U.S. is far higher than in any other developed country. Eleven hundred civilians on average are killed by the police in the U.S. every year. Compare that with the U.K, where only one civilian dies every year or Germany where eight die at the hands of police. 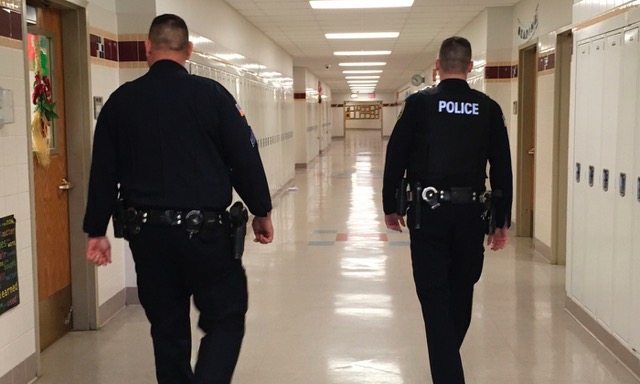 Nowhere is policing more problematic than in U.S. public schools. School Resource Officers (SROs) are armed law enforcement officers in uniform assigned to a school full-time.  The way they do their job is in line with the general drift of U.S law enforcement towards militarized solutions to non-military situations like age-appropriate adolescent acting out. Public schools at every level have been caught up in a maelstrom of increasingly militarized discipline and harsh punishment. The growth of school-based policing mirrors the U.S. focus on war and violence in relations with over half the world’s countries. In 1997, SROs were present in 10% of public schools. Ten years later, 42% have cops roaming the halls. For communities of color, the invasion of “locked and loaded” police has reached epidemic proportions. Over half of schools with a majority of black and Latino students employ at least one (often two or more) full-time police officers. No surprise then that students of color are more than twice as likely as whites to be referred to law enforcement or arrested at school.

As with most of what’s out of whack in America, treating infractions of school rules as military combat situations requiring armed police officers has a long and disgraceful history. Compounding the problem are lax or non-existent accountability standards that allow school police a get-out-of-jail-free card for thuggish behavior. The comparison is inescapable — policing in U.S. public schools is really a reflection of policing outside school.

“Militarization of policing encourages officers to adopt a ‘warrior’ mentality and think of the people (in this case students) as enemies. (ACLU Report, June 2013)

The criminalization of every aspect of civilian life in the U.S. started in the sixties with the government’s violent and often-times unhinged response to the social unrest caused by the Vietnam War and continued through to the criminalization of whole communities via Nixon’s War on Drugs. Along came Clinton and his get-tough-on-crime 1994 Violent Crime Control and Law Enforcement Act that succeeded in stigmatizing broad swathes of Americans of color as enemy populations. At the apex of punitive law enforcement — the development of the U.S. national security and surveillance state after 9/11. Thanks to both Bush and Obama, the series of Patriotic Acts which codified a secretive law enforcement complex at every level of government — federal, state, local —made police overreach synonymous with “keeping us safe” 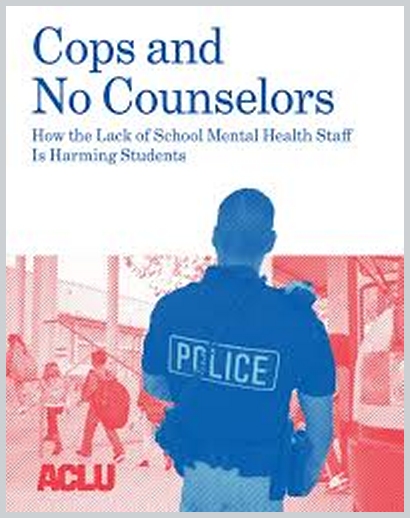 In 2012 school-based policing took on new political urgency when twenty children and six adults were killed at Sandy Hook.  It was easier not to run afoul of the NRA (National Rifle Association) and its vast giveaways to political leaders in both parties by “getting tough” on the almost non-existent every-day “crime” in public schools by installing more school-based police officers decked out with weapons, night sticks, tasers and chemical sprays than passing legislation to outlaw the sale of military-grade weapons to civilians or other gun control measures. What about adding more professionals like counselors, psychologists and social workers to help students cope with the increasing complexity of the demands made on them? Obama paid lip service to beefing up those services. But he never wavered from his focus on punitive measures. The legislation he ultimately signed into law allocated $46.5 million for school-based police and a measly $12.3 million for school counselors. 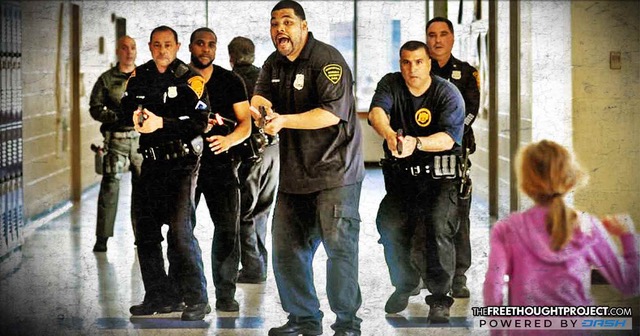 While federal funds continue to be allocated to school policing, the amounts are not nearly enough to fund the entire system. Local school districts are expected to shoulder most of the burden, Since it costs around $100,000 annually for every full-time SRO, in many school districts where budgets are tight, the biggest question is not the efficacy of the program but “How are we going to pay for it?” The response of Homeland Security— “Reallocate 1% from other budget line items —e.g. technology, supplies, sports, and capital expenditures.”

What a dandy solution. Cannibalize the aspects of education that deepen the learning experience in order to have cops in school delivering vigilante justice. For whose benefit? Research on the effectiveness of school policing to maintain order and curb student excesses has been unanimously negative (with the exception of that coming out of the NRA and Trump’s “brain trust”). According to the Justice Policy Institute — “[Adding more SROs] is largely a failed approach in devoting a significant amount of resources but not getting the outcome in school safety we are looking for.” In fact, the opposite may be true —police in schools often create more serious problems. A 2013 study found that schools with a police presence reported more non-serious offenses to law enforcement. Results of another study confirmed that school police did not improve student behavior one iota. Not surprisingly numerous other studies have found that school-based policing increases the number of suspensions, expulsions and arrests particularly in schools with a large population of students of color.

Despite a mountain of evidence, the NRA (National Rifle Association) and President Trump want to put at least one police officer in every public school. Estimated cost: $5 billion annually. Think of It, billions to turn students into suspects, reinforce the school-to-prison pipeline, transform schools into a military battleground and tarnish many students with a lifelong criminal record for misbehavior that in a more peaceful time would have been handled by educators and parents.

There’s more. Excessive demands for greater accountability, over-the-top testing and harsh sanctions on schools and teachers that fall short (Obama’s “Race to the Top” is a prime example) encourage the criminalizing of “problem students” on the road to “disappearing” them lest they drag down a school’s test scores and reputation. How much easier to mask educational deficiencies in the classroom by shifting the blame to student behavior. Sooner or later America will be called to account for the young lives its system of punitive schooling has dimmed. Who will pay the price for the traumatized students or the ones who leave school? Best guess —  all of us.

The following publications, reports and articles were used in developing this piece:

“Bullies in Blue: The Origin and Consequences of School Policing,” ACLU, April, 2017.

“The Other Side of School Safety: Students are Getting Tasered and Beaten by Police,” BY Rebecca Klein, HUFFPOST, 9/8/18.

“Do Police Officers in Schools Really Make Them Safer?” by Cheryl Corley, All Things Considered on NPR, 3/8/18.

“The Militarization of U.S. Police: Finally Dragged Into the Light by the Horrors of Ferguson,” by Glenn Greenwald, The Intercept, 8/13/2014.