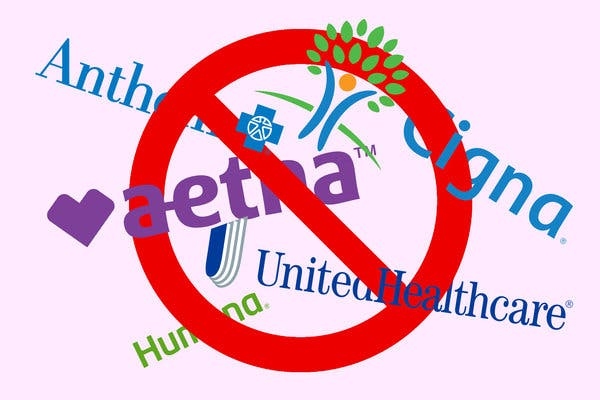 At the fourth Democratic debate as the candidates were strutting their stuff, the same tired old excuses were trotted out to justify Americans being virtually the only people in the world too stupid or too misguided not to yearn for a public health insurance system that kicks out the privateers, the lords of finance and the greedy capitalists masquerading as healers.

Here’s Joe Biden, two-time loser in the presidential sweepstakes, darling of the Democratic National Committee and the wealthy Dems who call the party’s shots, reciting industry talking points on Single Payer health insurance — “The plan is going to cost at least $30 trillion over 10 years. That is more on a yearly basis than the entire federal budget.” In 2018 privatized health care took $3.65 trillion out of the U.S. budget making the cost of national healthcare at $30 trillion over ten years a bargain. And no, Joe it’s not “more than the entire federal budget” which for fiscal 2019 will total around four and one half trillion dollars. In a final blow to his credibility as a truth teller, Bloomberg reports that the Biden campaign has been “testing messages [via a Wall Street-funded think tank] designed to undercut support among Democrats for Medicare for All”

But he wasn’t the only lunkhead on the democratic debate stage issuing dire warnings about the consequences of getting rid of the private health insurance industry. The others stuck to what they know best: conspiracy theories. Pete Buttigieg was outraged that anyone would “believe the only way to deliver affordable coverage to everybody is to obliterate private plans…”

Yes, Pete, in fact that’s what the most celebrated American economists who have studied healthcare trends for years have found — “[Medicare for All] would lead to a large tax cut for the vast majority of workers… “  Why? Because “insurance premiums are [essentially] the most regressive possible type of tax: a poll tax.”  With a national health system, workers would get the “biggest take-home pay raise in a generation.’ (Emmanuel Saez and Gabriel Zucman)

Outraged denials are always followed by a “gotcha” question from Democrats acting like moderate Republicans — “Won’t national health care raise taxes” is a favorite. Hell No! “With smart new taxes—such as broad income taxes exempting low wages and retirees—it is possible to make the vast majority of the population win from a transition to universal health insurance,” (Saez and Zucman)

To Biden’s contention that single payer healthcare would bankrupt the American people, here’s a reality check. While Joe has been pulling in large donations from private fundraising fetes, millions of workers with employer-sponsored healthcare are too poor to use the healthcare they’re paying for.

If you think you’ve heard it all, listen up. Here’s candidate Klobuchar crying crocodile tears over the toll national health insurance will take on workers — “149 million Americans will no longer be able to have their current insurance.”  Perhaps Senator Klobuchar is too busy mourning the possible loss of her major donors in the insurance industry to pay attention to a Kaiser Family Foundation report that found that in 2016, eighty-five million Americans were saddled with medical debt even though sixty percent of them (51 million) actually had health insurance, mostly through their employer.

As for Beto O’Rourke, he was obviously reading from the same script prepared for all the centrist (aka do-nothing) democrats — “[Medicare for All] …forcing tens of millions off of insurance that they like that works for them, to force them onto Medicare.”  Perhaps O’Rourke turned off his hearing aids when countless tales of woe were shared by employees whose employer-provided healthcare left them desperate and often bankrupt. How about the twenty-seven- year old chef with employer healthcare whose wife had a miscarriage. His share of the costs forced him to get two outside jobs. There are workers covered by high-deductible insurance plans struggling with chronic conditions like diabetes, heart disease and cancer who skip treatment because they cannot come up with $5,000 to satisfy their deductible.

A final democratic “deplorable” candidate, Kamala Harris had the bright idea that “[democrats should be] offering choice, not taking it from them.” Of course, the choice she’s trying to shove down workers’ throats belongs to the heavy hitters in the private health insurance industry getting rich off the money it costs every worker to maintain even a semblance of covered healthcare. 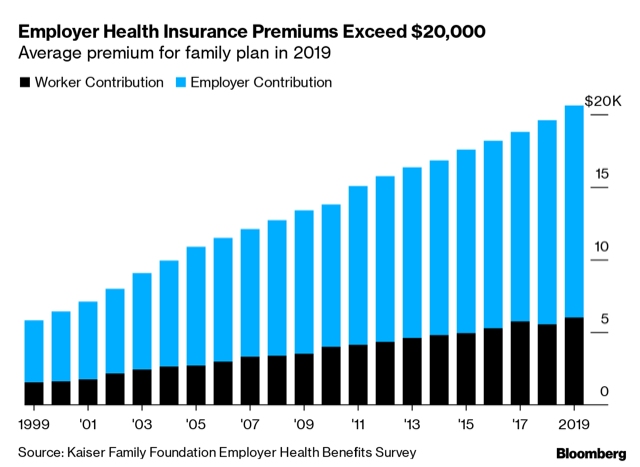 With sixty percent of working adults aged 18-64 receiving health insurance from their job, how it’s provided is a big deal for most Americans. In today’s job market the employer is in the driver’s seat. As labor historian Erik Loomis explains— “employers slowly force more and more of their costs onto their workers.” Employer demands that helped kick off the autoworkers’ strike at GM is a prominent example. Currently UAW worker pay 3% of their health insurance premiums, as opposed to an average of 28% paid by employees in other industries. GM’s is offering a contract that ups the 3% share to 15%. This is the same company that received $51 billion taxpayer dollars from President Obama in 2009 to stave off bankruptcy. A decade later, GM’s profits are a record $3.1 billion, its revenues $38 billion. Their CEO is living high on the hog with a compensation package of $22 million.

It is true that In the U.S. privatized health insurance system, workers in employer plans are getting a little less shafted than those forced to find their health insurance in the Obamacare jungle. But even so workers’ situation is no picnic. Three-quarters of covered employees pay on average 30% ($6,300) of their premium to cover themselves and their family. Workers who are part of a low-wage workforce and the least likely to afford it pay an extra 10%. If that isn’t vicious enough, premiums do not remain static but rise, generally every year. Between 2008-2018, premiums for employer-sponsored insurance plans increased 55%, twice as fast as wages. 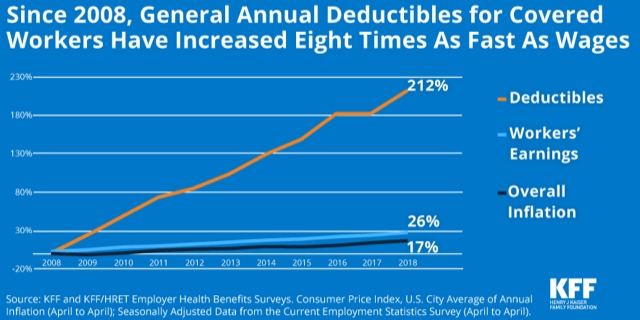 If you think that’s insane, check out employee deductibles which have risen 41% since 2014.

Would it surprise you to learn that 85% of covered workers must pay between $1,500 – $5,000 out of their own pockets before their insurance kicks in?

As the explosive cost of deductibles, premiums and co-pays begin to take their toll on workers’ lives and bank accounts, how are they coping? Not terribly well. Four in ten (40%) employees are “having trouble” affording their share of medical costs. To make matters worse, half of the 153 million with employer coverage say they or a family member have skipped or postponed medical care or prescription drugs this year because they couldn’t afford it. (Kaiser

Family Foundation) As for those enterprising employees who have tried to shop around for the best price for a medical procedure, two-thirds of them were unable to get an estimate of the cost of a medical procedure from their doctors or from a hospital.

Even when employees pay their share of medical costs like deductibles, premiums and copayments, they aren’t home free. Eighty-five percent are stuck with yet another deductible usually around $350 should they or a family member wind up in the hospital. 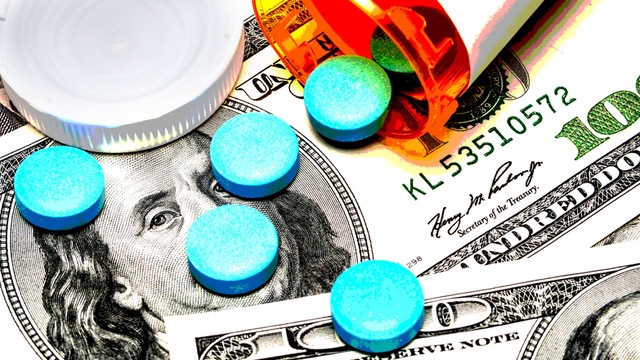 If you’re spared a hospital visit, there’s always the great drug rip off. According to a Mayo Clinic report, 70% of Americans take at least one prescription drug. Translated into profits, that’s a mighty big payday for the fat cats at Big Pharma. Especially since covered workers are stiffed with separate copayments for four tiers of drugs ranging from $11 per prescription to $129.

Doesn’t the fact that insurance costs “are prohibitive when 36 million workers making $25,000 a year have to shell out $7,000 a year just for their share of family premiums.” (Kaiser Family Foundation) make a good case for “getting the boss out of the doctor’s office.” (Shaun Richman, Labor Studies Center at SUNY).

Which goes to show that the health insurance industry along with their political lackeys have been doing a good job deluding workers into believing that if they want ‘freedom and choice,” getting ripped off by a private health plan is the best option. If you are tired of hearing that malarkey, stop watching MSNBC, CNN and rest of the mainstream corrupt media as they showcase democratic apologists. Real freedom of choice will come when all workers are covered with guaranteed healthcare in a national single payer system. It’s the only system that allows patients to choose their doctors, to undergo necessary treatments without cost and to shed the burden of costly premiums, deductibles and copayments. It’s the way the rest of the world lives. It’s the way Americans deserve to live. But big money and shady politics have kept us from getting there. Isn’t it time to “throw the bums out?”