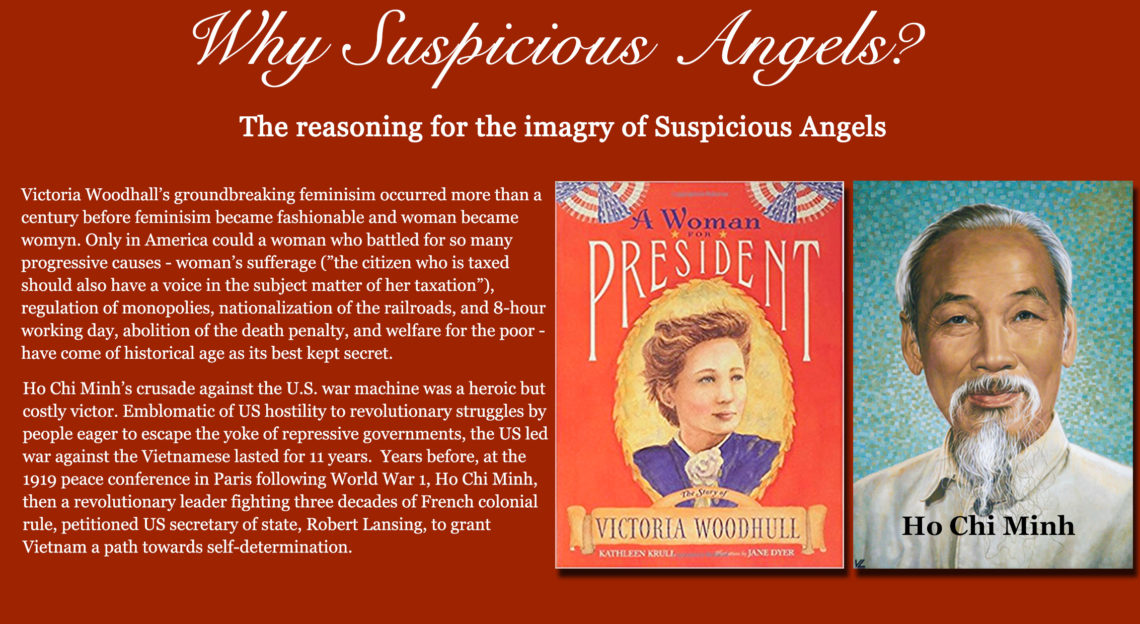 “As Americans, that’s not who we are. That’s not what we’re about.”
[Pres. Obama]

Who are we really? To answer that question is the truth-telling mission of Suspicious Angels— exploring history, (i.e. the Howard Zinn and Walter Karp version), debunking plans and priorities of the elites and illuminating the wisdom of the revolutionary left. Cutting through the noise of the mainstream media to the “facts on the ground,” the answer will be teased out in stories and songs, poetry and prose.

The Minister of Hope and Change, Barack Obama, has spent seven years telling us who he’s sure we’re not — not card-carrying racists, not immigrant-bashing Neanderthals, not gun-toting yahoos, not bigots, not like the rest of the small-minded world. Who we are is a topic he doesn’t often opine about. He touts instead the myth of America’s destiny — an exceptional people charged by God and history with rescuing the globe from its baser instincts. “America will also be a voice for those aspirations that are universal. We will bear witness to the quiet dignity of reformers.” [Pres. Obama, 2009 Nobel Prize] The “quiet dignity of reformers” has had little chance against the pack of empire builders who have inhabited the Oval Office in post World War II America. Ask the nationalists fighting against the oligarchy on behalf of the masses like Patrice Lumumba, Mohammad Mossadegh, Jacobo Arbenz, Salvador Allende Jean Bertrand Aristide, and most recently Manuel Zelaya. Of course, you can’t. Victims of American imperialism, they were transformed into public enemies #1 in their own countries and three presidents from both parties hastened them to their doom. The empire’s current excuse: “America has never fought a war against a democracy, and our closest friends are governments that protect the rights of their citizens.” [Pres. Obama, the Nobel Speech]

In a different but synchronous way, the scenario on the domestic front is weighted in favor of the corporate and finance oligarchy. The billionaires and their institutions, often non-profit foundations, monetize the races for the house and senate, muzzle the judiciary, and super pac a new president into office and provide the gravy for a second term.

Before superpower, there was Victoria Woodhull and Ho Chi Minh. Voices from the “dustbin of history” intruding upon this tangle of lies, deceit, and delusions. In 1872, 136 years before Hillary Clinton’s first run for the presidency, Victoria Woodhull, threw her hat in the ring, the first American woman to do so. Her political education began in 1871 when she befriended a Massachusetts congressman from whom she wrested the invitation to testify before the House Judiciary committee – becoming the first woman to appear before congress, then as now, the center of mostly male power and privilege. A long-time advocate of social reform through the newspaper she published, she founded the Equal Rights Party in 1872 to run for president and selected Frederick Douglas as her running mate. Ignoring her noble gesture, he, like the leading suffrage ladies, Susan B. Anthony, Harriet Beecher Stowe and Elizabeth Cady Stanton disavowed her. In a classic historical irony, Douglas and company survived to be venerated in history’s rear view mirror. Woodhull became a footnote in America’s continuing war on women. Douglas would throw his support behind the Republican candidate, Ulysses Grant in 1872 becoming the first in a long and illustrious line of “lesser evil” believers.

Woodhull’s ground-breaking feminism occurred more than a century before feminism became fashionable and woman became womyn. Surprising that a women who battled for so many progressive causes — woman’s suffrage (“the citizen who is taxed should also have a voice in the subject matter of her taxation”), regulation of monopolies, nationalization of the railroads, an 8-hour working day, abolition of the death penalty, and welfare for the poor — should have come of historical age as its best-kept secret. How ironic that 143 years later, the latest woman presidential aspirant abandoned a social reform agenda (and her soul) preferring to tread the well-worn neo-liberal, corporate welfare path into the White House.

Ho Chi Minh is the other face of American duplicity, one of millions of victims of US hostility to domestic or overseas freedom and justice movements, more comfortable with dictators— “US partners” [think Saudi Arabia]– in the drive for more markets for billionaires, more bases for military exploitation, and more covert wars for the “intelligence” honchos. During the 1919 peace conference in Paris following World War I, Ho petitioned the “great powers” to either grant independence or at least a path towards self-determination for Vietnam, a promise that Wilson himself had made in his “14 points” speech in January 1918. Ho made his case to Secretary of State Robert Lansing in the vain hope the United States would pressure France to liberate Vietnam. The imperialist response? Not on our watch. More than two decades later, between 1945 and 1948, he wrote at least seven letters to President Truman that went unanswered (according to Clark Clifford, democratic wise man for four US presidents) and in 1945, created the Vietnamese Declaration of Independence using the words of our own Declaration of Independence. Then, as before, silence greeted his appeals — no match for corporate and military pressure to make Vietnam an exemplar of the wages of disregarding the superpower’s dictates. Ho hung in there refusing to back down as the US war machine killed 1.1 million of his people and virtually destroyed his country. What wasn’t destroyed was poisoned — a death sentence passed from that generation to succeeding ones. Defying U.S. interests exacts a heavy toll on disobedient nations and their people. In this case, it was the people who paid the price for Ho’s indomitable will. Perhaps it was divine retribution that he never saw his dream fulfilled. He died in 1969, three years before the Paris Peace Accords effectively removed the US from Vietnam and six years before the North Vietnamese marched into Saigon and reunited their country.

Who we are? SuspiciousAngels will present the evidence. Reader, make up your own mind.