On the eve of the Senate’s probable confirmation of President Trump’s latest hard-right nomination to the Supreme Court, we are reminded of former New York Mayor Edward Koch’s perennial question, “How ‘m I doing?”  directed at voters. For three re-election campaigns, the voters exclaimed “Right on, brother”, and Mayor Koch won. The fourth time the voters weren’t  “feeling the love” anymore and Mr. Mayor became Mr. Ex-Mayor.

SA finds itself asking the same question as we contemplate the fall-out from two major Supreme Court upheavals this year. Fall-out number one occurred when Ronald Regan-appointed Justice Arthur Kennedy hot-footed it over to the White House to tender his resignation to the president fulfilling a thirty-year conservative wet dream of installing a reliably conservative majority on the Court. Upheaval number two followed on the heels of that announcement when the President nominated Appeals Court Judge Brett Kavanaugh.  Long on pedigree (Yale Law, clerkship with none other than the inscrutable Arthur Kennedy) and on attracting right-leaning dark money (classic example, the Judicial Crisis Network, which intends to spend millions in advertising and media buys to push his nomination) and short on the humanistic and moral vision that —it must be admitted — is in remarkably short supply among the leadership of exceptional America, Judge Kavanaugh promises to march in lockstep with purveyors of revisionist social and political policies (think Clarence Thomas, John Roberts, Samuel Alito, Neil Gorsuch).

Why is SA licking its wounds at this critical juncture? Forswearing our usual position as the skeptic-in-chief, we held out a grain or two of hope that President Trump’s first Supreme Court appointment, Neil Gorsuch, would not become another Justice Thomas landing at the farthermost right edge of the political spectrum. We were emboldened in our optimism that at the very least Gorsuch wouldn’t change the complexion of the Court. After all, he was taking over from the late Anton Scalia, about as far from a “liberal lion” as any Justice could be and still call planet earth home. Reading SA’s article on Justice Gorsuch (Be Careful What You Wish For: More Magical Thinking In the Age of Trump/Gorsuch), you might be tempted to believe that we were putting our faith in a metaphorical exorcism to open his cerebral portals and let a little sunshine and oxygen in.

No two ways about it. We were dead wrong. His first year on the bench revealed a justice dogmatic in his support of oligarchs, corporations, and finance and firmly opposed to upholding societal norms that used to be the cornerstone of U.S. democracy (at least that’s what the history books tell us) But it also opened our eyes to the baloney sandwich we were swallowing when it came to Brother Kennedy. In order to make sense of our disbelief that a relatively young justice could harbor such deep-seated animus for everything a democracy stands for, we must first clear our heads of that fusty notion that Justice Kennedy’s departure is an occasion to get out the hair shirts.

Let’s turn to his record. Arthur Kennedy is not now (and probably never was) the avenging angel who could be counted on to drive a cudgel through the democracy-killing Supreme Court decisions of the last couple decades. That cunning old fox Reagan knew exactly where he was taking the country when he appointed Kennedy in 1988. True, at one time Kennedy championed gay rights (more on that later), abortion rights (although he switched sides on later abortion rights cases), the death penalty (here too he changed dance partners a few times) and affirmative action.

His 1992 vote in Planned Parenthood v. Casey is the slender reed upon which most self-described liberal commentators keep his swing vote status alive. Not to dismiss the historic importance of his vote in the struggle for women to retain the pro-choice rights at the heart of Roe v. Wade, his later opinions on abortion rights (specifically one in the latest Supreme Court term) and other rights cases blows a big hole in his underserved reputation for “getting it right.”

Known as a hardball on capital punishment at the beginning of his term, in the twenty-first century Kennedy’ opinion took a sharp 180° in line with the public’s growing disenchantment with the idea of giving the state license to murder its citizens. In 2002, Adkins v. Virginia, he joined the majority in barring the execution of mentally retarded prisoners, in 2005 he was on the side of the angels in Roper v. Simmons, declaring the death penalty unconstitutional for juveniles (raising the question we don’t have time to answer here —what form of savagery propels a self-described exceptional nation to even think of killing its children) and in 2008, he once again sided with the more liberal wing of the court in ruling the death penalty unconstitutional for any crime short of murder, even the rape of a child (Kennedy v. Louisiana).

That Kennedy, along with his right-leaning comrade in arms Justice Roberts, saved Obamacare in 2014 is a mixed blessing. Functioning as corporate welfare for the medical mafia and their Wall Street overlords, the law did little to provide the kind of decent, live-saving, affordable medical care enjoyed by the rest of the advanced economies in the world. More a Republican law (it was actually written by the conservative Republican Heritage Foundation) than the progressive legislation Obama and his crew tried to make it out to be, ACA has proven to be a basketful of goodies for the medical, drug, and insurance community and a basketful of misery for patients. Testament to the worthlessness of the ACA, the leading cause of bankruptcy in the U.S. today is —you guessed it —medical expenses.

In truth, Justice Kennedy never strayed far from his Republican roots when it came to issues like government’s regulatory powers and federal vs. state powers. His hit list includes two decisions on gun regulations, one overturning a federal ban on gun possession near schools (U.S. v. Lopez, 1995), and the other, overturning a DC law that established strict laws for the possession of firearms (DC v. Heller) in 2008. In both cases, Kennedy’s swing vote benefitted the gun ‘totin’ majority.

To give the devil his due, Justice Kennedy’s vote in Obergefell v. Hodges) in 2015 was a historic “win” for equal rights in the U.S. as it allowed same-sex couples marriage rights in all fifty states. The Rachel Maddow crowd was giddy with excitement. But how much should progressives lionize a justice whose conservative record is barely leavened by a sprinkling of liberal opinions?

Progressives take note. Kennedy’s antics in the 2017-2018 term and his well-timed resignation which will undoubtedly result in switching America’s politically polarized third branch of government from moderately conservative to reliably hard right for decades is consistent with his votes in three destiny-changing decisions. In Bush v. Gore (2000), Kennedy changed the course of American history by joining the majority in a ruling that effectively installed George W. Bush as the 43rd president. 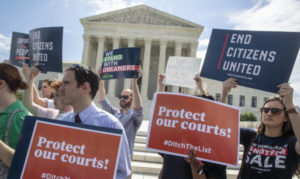 In 2010 in Citizens United v. FEC, Kennedy was once again the “swing vote” —swinging right to join the conservative majority in granting corporations the right to spend freely in elections, in effect giving corporations first amendment protections. In 2013’s Shelby County v. Holder, the Court struck down the very essence of a democratic society’s legitimacy by overturning the central portion of the 1965 Voting Rights Act and removing federal scrutiny of state-imposed voter suppression laws. Needless to say, Justice Kennedy’s “swing” vote set voting rights back to the dark days of white supremacy and Jim Crow.

As tainted as his brand was before, the 2017-2018 term demolished any semblance of a free-swinging, left-leaning Kennedy. It was all right, all the time. Gone was the Justice Kennedy whose vote struck down abortion restrictions in Texas (Whole Woman’s Health v. Hellerstedt) and saved affirmative action at the University of Texas (Fischer v. University of Texas). Enter Justice Kennedy 2.0 who in nineteen 5-4 decision declined to join liberal justices Ginsburg, Kagan, Breyer and Sotomayor. With Kennedy’s vote, Trump’s travel ban was upheld in a 5-4 decision. He diverged from his earlier support of abortion rights by voting with the majority to strike down a California law that would have required pregnancy centers to tell women about the availability of abortions.  He voted with the national security paranoids against a digital privacy law requiring law enforcement to obtain warrants to access cell phone location data (Carpenter v. U.S.)—cooler heads prevailed and the law was eventually upheld by the Court dealing the Trump administration a major blow. His Republican anti-union bias was on display in two decisions — joining his fellow union-hating colleagues in ruling that public employee unions may not require collective bargaining fees from non-union members (Janus v. AFSCME), and striking a mortal blow against workers’ rights by ruling that workers are legally obligated to participate in company-run arbitration proceedings to resolve employment disputes (Epic Systems Corp. v. Lewis).

The unkindest cut of all — the Justice whose vote legalized gay marriage in the U.S. came down on the side of a Colorado baker who refused to make a wedding cake for a same sex couple (the same baker who had earlier made a wedding cake for the nuptials of two dogs). This train wreck (aka the 2017-2018 Supreme Court term), not content with throwing gays, union members, and pregnant women under the bus took aim at immigrants denying them the right to a bond hearing even after months or years in detention (Jennings v. Rodriguez). Need you ask which side our boy Kennedy came down on?

While Kennedy’s fall from progressive grace was surprising, not shocking, the career of Neil Gorsuch, Trump’s first appointee to the Court was eminently predictable. The thin ray of hope SA held out that he would break the mold of his history of social and political cretinism, shows how wrong a fair-minded critique can be. Gorsuch has voted with Clarence Thomas, the most right-wing Justice, nineteen times. Judicially they appear to be joined at the hip. Which bring us to Brett Kavanaugh. Will he truly step into Judge Kennedy’s shoes? Yep. Will his comfort zone lie with his buddies on the right-most edge of the political spectrum? You betcha. Will his appointment change the right-ward drift of the Court? Sadly no. Justice Kennedy’s history leaves little room to doubt that as one right-wing judge exits stage left, another right –wing justice enters stage right. Who would have thought that justice-picking in the U.S. is a zero-sum game? The right wins big, the left loses big and life goes on in what is fast becoming exceptionally right-wing America.