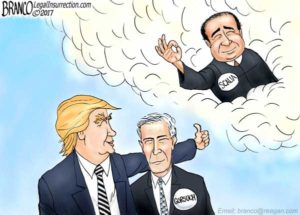 Be Careful What You Wish For: More Magical Thinking in the Age of Trump/Gorsuch

A word of caution to those zany conservatives, far-right zealots and self-described Alt-Righters. Planning a super-bowl sized celebration over President Trump’s nominee, Neil Gorsuch, to the Supreme Court? Heaving a sigh of relief finally your big moment has come. Traveling too far down that road may lead to crushed hopes and mind-numbing disappointment. Do yourself a favor. Read (or reread) “Magical Thinking: Supreme Court Justices and the Presidents Who Pick Them” (Issue 5).

Behold: the rules of the road for judging the political temperament of the would-be nominee. Rule number one and the only one you really need to bother about nothing a potential Supreme has said, done, or even testified to under oath is set in stone. Maybe it’s the water or the air in Supreme Court land or the prospect of a permanent appointment to the highest judicial body in the country followed by a prodigious pension (the proverbial pot of gold at the end of the rainbow), in any case a confirmed Supreme Court Justice can surprise both friends and enemies with decisions that fly in the face of past opinions, writings, verbal sentiments and pre-selection testimony. One contemporary illustration – Chief Justice John Roberts, in the words of President George W. Bush who appointed him “[Roberts is] a person who understands what it means to be a strict constructionist — somebody who looks at the words of the Constitution for what they are, somebody who will not legislate from the bench…” Fast forward seven years to 2012, Justice Roberts was the deciding voice in approving most of Obamacare including the individual mandate. Not your father’s strict constructionist for sure.

Come to Jesus moments are not reserved for conservatives who high-tail over to the left on occasion. Liberal jurists are often afflicted with the same contrarian malady. FDR’s hand-picked liberal cadre of justices, who gave a judicial thumbs-up to the some of the most progressive legislation in the history of the Republic, were the same justices who gave their imprimatur to FDR’s plan to forcibly remove over 120,000 Japanese Americans from their homes and imprison them in concentration camps for four years for the crime of having the wrong birthright (i.e. Korematsu v United States). “Magical Thinking” will give you the skinny on those reversals and much more. For conservatives who think their time has come, a quick read may portend a few sleepless nights.

Having entered the world of mercurial-decision making, a closer look at Judge Gorsuch is in order to lay odds on how likely he is to surprise progressives and dismay conservatives. At first glance, the prospect for progressives is not encouraging. Throughout his academic career – spanning Columbia, Harvard Law and a PhD at Oxford, he has seen world issues through a decidely conservative lens. As a Columbia undergraduate in the 1980s, he co-founded a newspaper The Federalist Paper whose focus was generally to the right of most Columbia undergraduates (and many Americans) of his day. The Federalist Paper maintained a reliably right wing position on most of the burning issues of the seventies and eighties – criticizing anti-apartheid advocates, arguing that divestment could hurt Columbia’s endowment, opposing racial justice protests and black-led campus movements while simultaneously defending President Reagan during the Iran-Contra crisis, Maturity did little to change his politics. He has maintained his ideological myopia His doctoral thesis, later made into a book, The Future of Assisted Suicide and Euthanasia (2006) was “premised on the idea that all human beings are intrinsically valuable and the intentional taking of human life by privileged persons is always wrong.”  Maybe not always wrong, Gorsuch hastened to add a caveat “I do not seek to address publicly authorized forms of killing like capital punishment.” His defense of the sanctity of life unless it is the state doing the killing fits tidily into his anti-abortion view of the fetus as a human being.

Gorsuch’s judicial record is littered with examples of the hard-right bias of his view of reproductive rights. One decision in particular stands out.  As a judge on the United States Court of Appeals for the Tenth Circuit, he joined the majority on the court in ruling that Hobby Lobby, an arts and crafts company, is a person, according to the constitutional definition of the term, and is therefore entitled, on freedom of religion grounds, to withhold reimbursement of contraception expenses from its employee health plan. (The case went to the Supreme Court where the tenth circuit’s decision was upheld by five justices, four of whom will become his homeboys – Roberts, Alito, [fence sitter] Kennedy (whom Gorsuch clerked for), Thomas (a conservative who never disappoints). He will take the late Anton Scalia’s seat. Judge Gorsuch leaves little room for debate on his anti-abortion views. Note his declaration in the Hobby Lobby decision that requiring businesses to cover all approved contraception devices would “have the effect of destroying a fertilized egg.” Together with his efforts to defund Planned Parenthood, and his extreme views on assisted suicide – the dismantling of Roe v Wade (landmark abortion rights ruling) hangs like the sword of Damocles over the head of every child-bearing woman in America.

How about that other contentious issue roiling conservatives and liberals.  Surely a “brilliant” thinker like Gorsuch would make consistency the bedrock of his opinions. An opponent of assisted suicide on the grounds that “the intentional taking of life is always wrong” and an anti-abortion advocate who has ruled against laws he affirms would “have the effect of destroying a fertilized egg” – surely his nomination would be fiercely opposed by the NRA and the National Shooting Sports Foundation, the gun industry’s mouthpiece. Not so fast. Here’s the NRA’s take – “[Judge Gorsuch] will protect our right to keep and bear arms.” The National Shooting Sports Foundation was singing from the same hymnal as it “expressed its strong support for Gorsuch. How is it possible that a fierce defender of the sanctity of life can be kissing cousins with two of the major pro-gun organizations in the US? Adam Winkler, a gun rights expert at the University of California’s LA Law School lays it at the feet of Gorsuch’s broad interpretation of the second amendment which “would read laws that ban people from having guns narrowly…[H]e doesn’t have a lot of cases but the cases he does have very much fall in line with the NRA’s view.”

The bottom line on Judge Gorsuch? A judge willing to break with tradition and ordinary process using every tool in the conservative toolbox to further his agenda. A judge who will limit government regulations vital to protect the planet’s air and water, the citizens’ medicine and food. In his own words “Executive agencies today are permitted not only to enforce legislation but to revise and reshape it …All this delegated legislative activity by the executive branch raises…troubling questions about due process…” A judge with a history of working against workers, women, and regulations. Think of it as President Trump’s revenge on the naysayers (i.e. those who didn’t vote for him) as he fulfills his agenda of expanding gun rights and overturning Roe v Wade. Neil Gorsuch checks all the boxes.

Are there glimmerings at the end of this particularly gloomy tunnel? The examples of unpredictable consequences in “Magical Thinking: Supreme Court Justices and the Presidents Who Pick Them” (Issue 5) should give conservatives pause and liberals hope. Maybe Trump hasn’t pulled off the full Monty. According to Jeffrey Rosen “If he [Gorsuch] succeeds Scalia…he will be even more willing to enforce constitutional limitations on any excesses committed by the president who appointed him.” (“A Jeffersonian for the Supreme Court,” The Atlantic, 2/1/2017)

P.S. Liberals take heart. It may be curve ball time with Judge Gorsuch hitting it out of the park. Doing the de rigueur courtesy calls on congressional members, Judge Gorsuch wandered into the office of Senator Richard Blumenthal and admitted that President Trump’s attack on the judiciary (i.e. the “so-called” judge who shot down his Muslim ban) was “disheartening” and “demoralizing.” More interesting still, he gave Blumenthal permission to disclose his comments to the media (which Blumenthal gleefully did). Could there be another “October Surprise” brewing? We can only wait – and hope.