Remarkable! A country that spends close to three-quarters of a trillion dollars on its military budget (and untold billions more on the “black” budget which covers activities the U.S. doesn’t talk about) — more than the next seven countries combined — with 800 military bases in over 70 countries (exact number – you guessed it — secret), with ten “unified combatant commands” (think AFRICOM, CENTCOM, EUCOM, we even added an outer space com this year —CYBERCOM), with active wars in seven countries and drones pulverizing local populations in at least six countries and still the U.S.is wetting its pants over the impending “destruction of our democracy” as a result of Russian “meddling.” Take it from Clint Watts, ex-FBI, now senior fellow at the Foreign Policy Research Institute (Henry Kissinger, war criminal extraordinaire, is also on the Institute’s payroll) and paid shill for NBC — [You Know Who] has “successfully penetrated” some state voter rolls to “destroy our faith that democracy actually works.” As if the spectacle of prisoner treatment at Abu Graib, of Muslim men locked up for decades at Guantanamo even after being acquitted, the disclosure of “enhanced interrogation techniques” (waterboarding, sleep deprivation, stress positions), of rendition of mostly innocent men who happened to be Muslim and of immigrant children being snatched away from their parents reinforce “Americans’ faith that democracy actually works.” 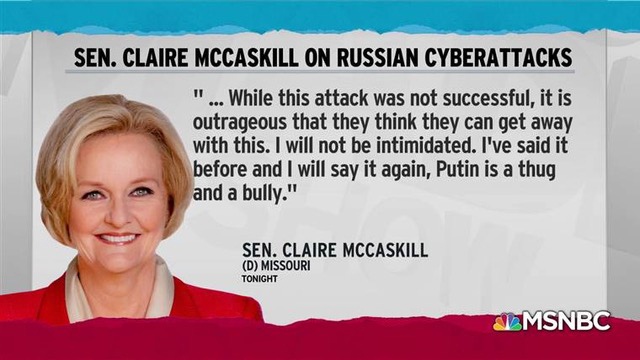 The illusion of nationwide Russian mayhem fed to the public as a conspiracy mounted by President Putin who has been variously described by press, pundits, and political leaders as dictator, autocrat, strongman, tyrant, bully, thug and (my personal favorite) neo-Czarist, has raised the temperature of the discourse well above 212°. The press, even NPR once a liberal darling now a neo-liberal darling, rushed into print with variations of the “evidence is already in” headline: “Trump Refuses to Back Intelligence Agencies’ Election Meddling Findings.” As intemperate and unobjective as that might seem, it doesn’t hold a candle to the goings-on at The Starbucks Express, aka Morning Joe.  The day after the Helsinki press conference, the general tenor of hosts and guest analysts (paid) was funereal (the men in dark suits). The Big Cheese himself Joe Scarborough began the verbal rampage by asserting that “Vladimir Putin owns Donald Trump…the intelligence community have proven attacks took place and where they came from…this should be a moment of celebration for America’s intelligence community. They got a chance to prove that they are the best and brightest on the planet.”  Perhaps Joe should take a sentimental journey through the last fifty-some years of American history —the last “best and brightest” crew catapulted America into the Vietnam bloodbath.

Willie Geist, substitute co-host, nattered on about “invading democracy.”  The rhetoric kicked up a notch when the guests let loose. Dan Balz, reporter at the Washington Post whose second job is paid analyst at MSNBC, delivered the coup de grâce —“The President refused to stand up for the country he was elected…to protect.  Hypocrisy took on new meaning when Mike Barnicle, a Morning Joe regular, intoned— “a day to cry for the Republic…that means so much to so many people. Fearing that his emotionalism might be taken as a sign he wasn’t sufficiently horrified, he got with the program by labeling President Trump “ignorant and narcissistic.”

Meanwhile in other venues, with talking heads who passed History 101, historical allusions were all the rage. Tom, “all war-all the time, Friedman, upped the ante for the rest of the shock troops— “[Russian hacking] was a 9/11-scale event. They attacked the core of our democracy. That was a Pearl Harbor-scale event.” Democrat Representative Jerry Nadler agreed that Russian hacking was the “equivalent” of Pearl Harbor. In what has to be one of the most bizarre moments in television, here’s John Podesta, former chief of staff to the great draft dodger himself Bill Clinton, calling Donald Trump a “draft dodger,” not for dodging the  draft (which he did) but for declining to join the “war” on Russia.

We’ve seen this movie before. First, the outrage du jour, a widely condemned summit, the downing of a plane, WMDs, take your pick. Next the cacophony of voices of politicians and media shills raised in indignation. Sooner or later, the story is debunked prompting a giant “duck and cover” maneuver. The media goes dark. The microphones are silenced and the accusers slink off into the sunset. Until the next time.

Let’s take our own stroll through the historical record and see this chain of events in action. Sixteen years ago, the “intelligence community” had “high confidence” that Iraq had WMDs it was planning to use on the U.S. and its allies. Following the America-first-last-and-always script, CIA Chief George Tenet assured President Bush that the evidence against Iraq was a “slam dunk” case. That precipitated the usual crush of “experts” jostling for their turn at the microphone to huff and puff while pointing an accusing finger at the evildoer du jour, Saddam Hussein. From there on, events followed the usual trajectory — some form of the “we know” mantra designed to lure the public into unquestioning acquiescence to the latest media-constructed or government-inspired (usually both working in tandem) threat to ”our way” of life. The hysteria receded after a while but not before leaving disaster in its wake. The “slam dunk” affair eventually stampeded the U.S. into one of the worst foreign policy blunders in this century.

Here’s what a potent effect the “we knows” have on public perception. President Bush led the parade in his State of the Union address in January, 2002. “We know that Iraq in the late 1990s had several mobile biological weapons labs.” An assertion seconded by then Secretary of State Colin Powell at the U.N. on February 5, 2003, “We know that a missile brigade outside Baghdad was dispensing rocket launchers and warheads containing biological warfare agents.” To hammer home the point, he went on to assert “there can be no doubt that Saddam Hussein has biological weapons… pointing an accusing finger at a photo he declared “sure signs that the bunkers are storing chemical munitions”

In 2003, too late for Iraq, Democratic Senator Jane Hartman was called upon to do the mop up operation. “It appears (quite a distance from ‘we know’) that the intelligence community in the case of WMD connected the dots to the wrong conclusion.” Note the lack of agency, not the intelligence community blew it and committed a fatal and unforgiveable error (which it did), but simply “we got it wrong, stuff happens.” 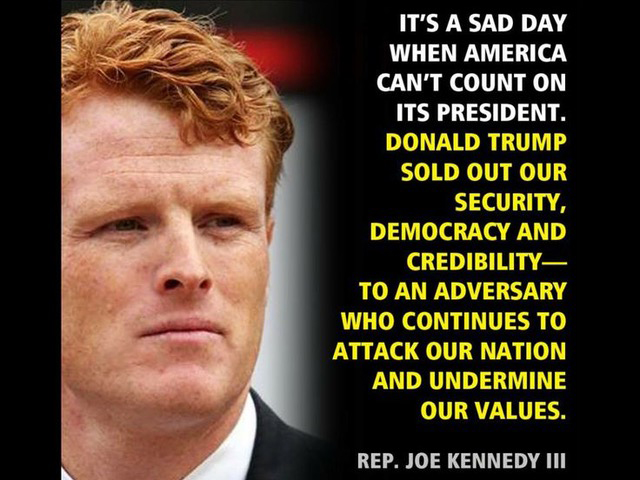 Always unwilling or unable to apply lessons learned from flagrant past errors, witness the rebirth of the “we know” chorus sixteen years later.  On July 19, Republican Senator Jeff Flake stood before a microphone and declaimed — ”We know the intelligence is right. We stand behind our intelligence community.” Corporate media was all over the story. On July 10, Jeff Bezos’ Washington Post echoed the good senator — “The U.S. intelligence community has concluded that Russia interfered in the 2016 election to help Trump’s candidacy.” Mother Jones’ David Corn, the liberal’s liberal, came to the same conclusion albeit on a more histrionic note— “[Helsinki press conference] provided a clear indication that Trump is indeed guilty of colluding with Putin to cover up Moscow’s criminal assault on American democracy.” 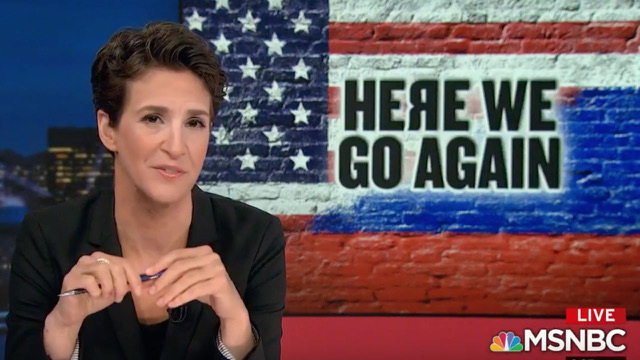 No tale of American paranoia would be complete without tuning into CNN’s The Rachel Maddow Show. Amid dark hints of treason at the highest level, Maddow joined the “we know club” — “Now that we know Russia did attack the elections and took steps to help put Trump in power….” To give her claims added weight, she quoted General H.R. McMaster, at the time Trump’s national security adviser and an early member of the “we know” cabal: “With the FBI indictment, the evidence is now really incontrovertible [reference to Russia “spying” and “subversion].” Whatever happened to innocent until proven guilty?

Americans were innocents in 2002 still smarting from the catastrophic loss of life on 9/11. It was cathartic to believe the president, secretary of state, congress, intelligence community, the national security establishment, the corporate media and the talking heads when they told us— We know Saddam Hussein has WMDs. Much later we learned they were all wrong. By that time, it was too late for Iraq and a wide swath of the Middle East that had been devastated by American bombs, American troops, and American mercenaries.

Today, we are in the same evidence-free zone, with only the chorus of we knows to chart our way through this thicket of charges, accusations, and self-serving balderdash. The stakes are a lot higher this time around. The villain in this drama is not vulnerable, non-nuclear Iraq, it’s Russia, one-half of the duo that controls 90% of the world’s nukes. Unconscionable war hawks in both parties speak of “going to the brink” with Russia “If our military leaders are listening to Putin and we back off because Putin threatens to retaliate, that is a disaster for us throughout the world…” (Senator Lindsay Graham). Torture advocate and confirmed liar— “there has not been a single collateral death [as a result of drone signature strikes in 2011]” — John Brennan piled on, “he’s [President Trump] giving aid and comfort to the enemy.” For most U.S. policy makers and politicians, the enemy is any sovereign state that has interests different from those of the U.S.

Not all autocrats find themselves at odds with the U.S. power structure. Those who are U.S. clients are a protected class. Considered “investments” that have strong upsides, these pampered few are immune from U.S. condemnation of their oppressive regimes (think Saudi Arabia, Israel and Egypt). The rules change when it comes to Russia. With the U.S. anti-Russian fixation, brinksmanship rises to the level of official foreign policy as the U.S. stumbles into the eye of the storm. The lesson America has yet to learn: Even for the world’s sole superpower, actions have consequences. As history reminds us: “Those to whom evil is done. Do evil in return.” Perhaps the wisest course may well be the only course — “We must love one another or die.” (September 1, 1939 by W.H. Auden as World War II began)