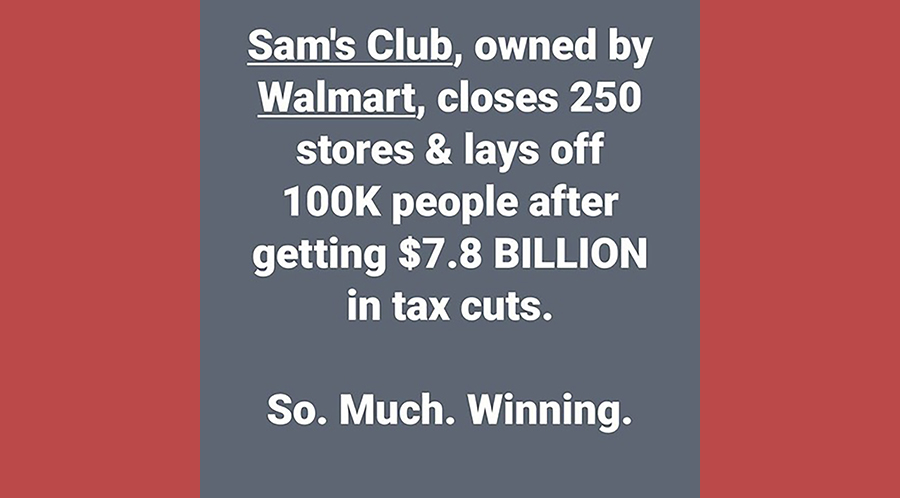 “Sis, Boom, Bah” —Whoops of joy from all sectors of the American noise machine, media pundits, neoliberal economists and media talking heads celebrating the rebirth of the American economy. An economic miracle, we are told, that will float all boats. The streets may not be paved with gold —yet but count on it, in the words of one of our former delusional presidents (there’s 45 to choose from), there’ll be a chicken in every pot and a car in every garage. In a more recent example, ex-president Obama was still patting himself on the back for all those jobs his administration created “We saw the longest streak of job creation in American history by far… A streak that still continues by the way…”

Not to be the ant at the picnic but perhaps someone should remind Obama that all that glitters is not gold. According to a study conducted by two prize-winning economists at Harvard and Princeton, of the ten million jobs created during the Obama administration, a whopping 95% were temporary, contract, or “gig” jobs (think Uber or Lyft). His successor, in a similar self-congratulatory mode natters on about making the American economy great again. “In many ways this is the greatest economy in the HISTORY of America and the best time EVER to look for a job!” His wasn’t the only voice raised in jubilation. A sampling from the bought and paid for media — “Economic Growth in U.S. Leaves Rest of World Behind’ (Wall Street Journal), “Americans’ View of Job Market Remains Upbeat” (Gallup), “Jobless Claims…Are Still Running at Historic Lows” (Washington Examiner), “U.S. Hiring Strong in June…” (Washington Post)

No surprises there. Just the kind of hype to be expected from a business-friendly media force-feeding rank absurdities to an unsuspecting public. The real story emerges from a raft of economic reports from federal agencies and economic think tanks. Predictably, it’s a far darker picture of where the U.S. economy is going and who is and isn’t going with it.

Let’s start by looking at the claim that the U.S. is economically eating the lunch of the rest of the world. Included in that claim is the low unemployment figure the Bureau of Labor Statistics choses to publicize. (More about that sleight of hand later) That’s not the verdict of the OECD (Organization for Cooperation and Development), an organization of 36 of the world’s most advanced economies. Quite the reverse. American workers’ share of total U.S. output fell sharper and faster than the share of workers in other OECD countries. If that wasn’t bad enough, the U.S. also had a larger proportion of low-wage workers than virtually every other OECD country. 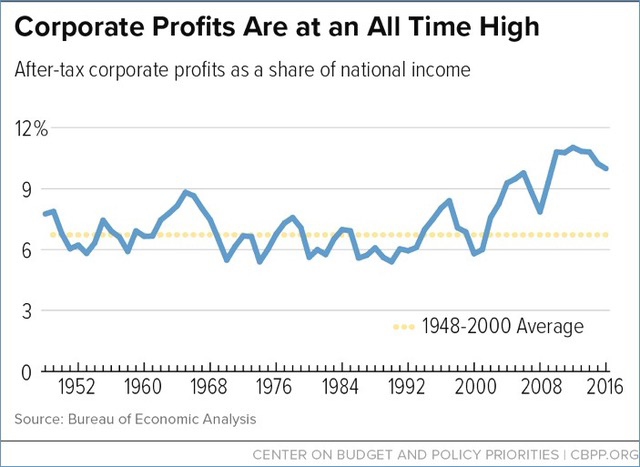 So much for how American workers are doing relative to workers in other advanced economies. Closer to home —how much of the national income is going into the wallets of American workers? At the same time, how big a slice is going to the corporations that employ them? Comparisons being the spice of life, let’s look at the figures for 2000, and see what eighteen years has wrought.  Then as now, the unemployment rate was around 4%. Corporations were squirreling away a modest 8.3% of the nation’s income while workers’ wages consumed a healthy two-thirds. What a difference a couple of decades and a growing financialized economy run by oligarchs and their water carriers in Congress and the administration makes. Today corporations take home 13.2% of the nation’s income and workers’ share has tumbled to 62%, the lowest level in decades.

Other indicators also point to the corporate raid on the national treasury. As the economy leaves the doldrums of 2009 behind, corporate profits are on the move upward to the tune of an average 6.5% per year. Some financial institutions, like J.P. Morgan Chase and Citigroup, have scammed their way to double digit profits for the first quarter of 2018. Has that largesse trickled down to U.S. workers “whose view of the job market remained upbeat?”  Sad to say, the facts belie their optimism. Consider: the average hourly wage of private sector employees has risen by a measly 2.8% in 2018. Even that pittance has been swallowed up by the 2.9% increase in the Consumer Price Index over the last twelve months. Just the rise in gas prices will cost the average American family $300 this year, the pain increased by gargantuan hikes in medical care, including scandalous inflation in drug prices. 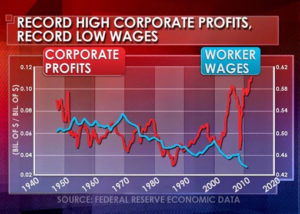 How do you square economic reality with the rosy job numbers reported every month by the Bureau of Labor Statistics (BLS)? Beyond the finagling indulged in by every administration to make lemonade out of lemons, the disparity lies mostly in the tale of two reports. The U-3 report that the BLS choses to publicize counts as unemployed only those actively seeking full-time work within the past four weeks. Part time workers (regardless of the number of hours they work), contingent workers (those who do not expect their jobs to last or who know their jobs are temporary) are counted as employed. Discouraged workers, those who didn’t look for a job during the last month are erased. Is it any wonder that the June U-3 unemployment rate was only 4%? A much more accurate picture of how workers are faring in the job market emerges in the U-6 report which counts as unemployed ‘marginally attached’ workers (those who have tried to find a job in the last year but not in the last month) and part time workers looking for full time jobs. The jobless rate with everybody in, nobody out is 7.8%, almost double the hyped figure. 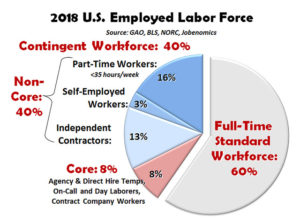 If you really want to know how the U.S. worker is feeling— “upbeat” being a stretch —take a gander at the Federal Reserve’s 2018 “Survey of Household Economics and Decisionmaking.” Many workers live on the brink of disaster—30% cannot count on a fixed monthly income, 25% skip necessary medical care and medications, and 25% had family incomes of less than $25,000. Is it any wonder that 11.5 million Americans misuse opioid drugs?

Is President Trump going to save U.S. workers’ bacon? He said he would when he passed his corporate tax giveaway last year. How is that working out? For corporations Jim-dandy. Since January 1, 2018, major U.S. fat cat companies including Apple, Wells Fargo and McDonald’s have announced buy-backs of their own shares to the tune of almost three-quarters of a trillion dollars. When they’re not busy enriching CEOs and shareholders by gobbling up their own shares, “a lot of U.S. businesses are looking abroad to see what they can buy because it’s easier to finance…overseas.” (Jason Gerlis, TMF Group U.S.A., global consulting firm).

The message is unmistakable. Corporate America is out to bring the labor force to heel. They’re getting plenty of help from the Federal Reserve and the three branches of government. In what society that practices rather than preaches economic fairness and justice would the highest court in the land strike down class action law suits by workers in favor of employer-managed mediation scams and compound the misery by outlawing “agency fees” which unions had been allowed to charge public sector non-union members to cover the cost of collective bargaining on their behalf. Not to be outdone in the piling on department, Congress passed the tax overhaul and the President signed it.  When all else fails, there’s always the Federal Reserve ready to jump in to protect corporate priorities and profits.  On the lookout for an overheated economy that “could lead to a significant economic downturn,” the Fed has telegraphed its intention to raise interest rates at least two more times this year (for a total of four increases in 2018) — resulting in higher interest rates on mortgages, car loans, student loans, and credit cards. Not surprisingly the business-friendly Fed shrugged as corporate profits went through the roof.  But at the tiniest increase in workers’ wages the Fed’s warning lights started blinking red.

Where do all these machinations leave the U.S. economy? Corporations are rolling in dough. Wages of workers are circling the drain. Fortress America has left economic equality in the rear-view mirror. While the U.S. makes war all over the globe, at home it’s making millionaires and billionaires. The richest man in recorded history, worth $112 billion, is Jeff Bezos, founder and chief executive of Amazon, while a growing number of Amazon workers rely on Food Stamps to put food on the table. Of the five richest people (they’re all men) in the world, four are Americans. In this garden of plenty and plenty more, workers become fodder for the economic pile driver that spits out those precious profits. The U.S. labor force is losing ground every day. The real catastrophe is that they haven’t realized it yet.