This is an update to “Where Have All The Protestors Gone” 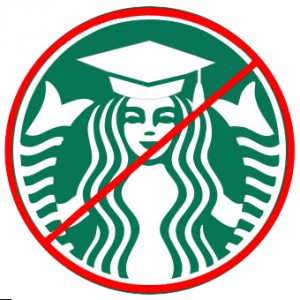 She was a young Hispanic woman from Puerto Rico. The first in her family to go to college. With no financial support from her family, she borrowed money — lots of it. When she graduated, she owed $30,000. But that wasn’t the end. She wanted to be a social worker to make life better for poor people. Another two years of graduate school, another $25,000 in student loans and she had her MSW degree. She was ready to go. Not so fast, standing in her way was a mountain of debt. Not for her the social worker job she had dreamed of. With the debt collectors breathing down her neck, she took on two part-time minimum wage jobs. Still she was only able to pay one-third of what the loan servicer required and her debt mounted with loan payments and penalty fees and interest on penalty fees. Caught in the trap of escalating debt and declining resources (at one point her monthly payment was twice her monthly rent), she was always stressed out, finally abandoning her dreams and finding a permanent spot on the low pay tread mill. Today, just shy of ten years later, her debt has ballooned to $90,000. Recently a debt-free classmate phoned to ask her to join a protest outside the office of Secretary of Education Betsy DeVos, who had just announced the imposition of a new penalty fee on delinquent loans of as much as 16% of the debtor’s total loan balance. She was too scared of getting into trouble to attend. 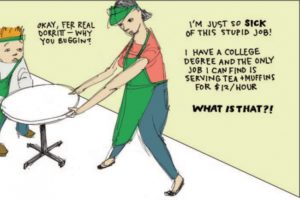 The link between growing authoritarianism on the nation’s campuses along with zero tolerance, militarized campus cops a plethora of metal detectors on campus and the stifling of civil activism —protests, sit ins, demonstrations — began decades ago as the liberating effects of open admissions and free tuition gave way to a market-based higher education model doling out rewards to providers at the expense of recipients. As free tuition went the way of whalebone corsets and spats, tuitions skyrocketed (in the last 30 years, tuition costs at public universities have tripled) and student debt followed a similar trajectory. Over the past decade, student loan debt has increased 281%. The dismal statistics surrounding student loans serve as a reminder of the anguish millions of students live with daily. 44.2 million have graduated with diplomas in their hands and massive debt on their backs. This year total student debt sits at $1.44 trillion. Even profligate U.S. credit card holders owe $620 billion less. The class of 2016, owes an average of $37,712, up 6% from 2015. Like everything else in racialized America, student loans are far from color-blind. Low-income black students have nearly $8,000 more debt than their white counterparts. Their chance of joining the ranks of student debtors is double that of white students. 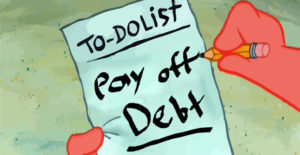 The unearthly quiet on college campuses and in the streets, the lack of anti-war protestors as America’s perpetual wars drag on is not hard to understand. When 60% of college students are spending most of their free time and energy worrying about their mounting debt, protesting is not an option. When you trap people in a system of debt, they can’t afford the time to think.” (Noam Chomsky)

Student debt began when the U.S. oligarchy decided that free tuition was downright un-American and threatened their hegemony. To see how we got to this place where public higher education is neither free nor open, let’s look at how debt peonage replaced free tuition and student activism disappeared at two major universities — City University of New York (CUNY) on the east coast and the University of California (UCAL) on the west coast.

Up to the 1860s, higher education was reserved for the wealthy through a system of private colleges. That changed in 1862, when President Lincoln signed the Morrill Act creating a system of land-grant public colleges. Sixty-nine colleges, including Cornell, MIT, and the University of Wisconsin, were established. Most of them were tuition-free for residents. A century later in 1944, President Roosevelt signed the GI bill to enable soldiers returning from World War II a tuition-free education. Over 8 million GIs were the beneficiaries. In 1958, attention once again focused on the state of higher education in the U.S. when the Soviets launched the first satellite into space. Congress was quick to set aside $1 billion that eventually provided scholarships and low-interest loans to 40,000 low-income students. 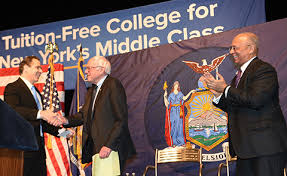 Government-supported higher education wasn’t the only spoon stirring the pot. Fifteen years before the Morrill Act in 1847, Baruch College (part of what became CUNY) was founded as the Free Academy, the first free U.S. public college. On the west coast, in 1868, UCAL, now the largest public university system in the U.S. abolished tuition three months after its founding.

As with most things that benefit “ordinary Americans,” free tuition was too “dangerous” to last. At CUNY, another wrinkle developed when it became clear that free tuition was not enough. Open admissions and for underprepared students, “catch-up” classes needed to be part of the mix. In 1969, the New York Board of Higher Education grudgingly agreed. This was not to the liking of the wealthy oligarchs who sat on the university board (and were its biggest donors). Eight years later in 1976, the first year the majority of the student body was non-white free tuition at CUNY ended. Coincidence anyone?  Open admissions hung on for another 20 years but without free tuition, mass higher education in New York City died. 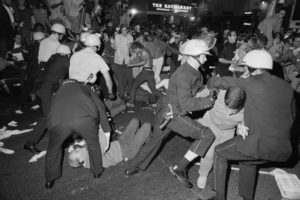 Events took a similar turn on the west coast. By the 1960s, the student body at UCAL was far more diverse and with diversity came a raft of student uprisings (particularly at Berkeley, the home of the free-speech movement), demanding a voice in policy-making and administration. The 1964-1965 academic year was a particularly tumultuous one with sit-ins and demonstrations centered around university-enforced restrictions on student political speech and action. Student activism crashed and burned in 1966 when Ronald Reagan, B-movie actor, became Governor Reagan. Campaigning on among other socially-devastating promises to “clean up the mess in Berkeley,” he touched a nerve with a majority of Californians puzzled and dismayed by televised student protest demonstrations and sit-ins. Reagan’s victory, as promised, ended free tuition in California.

The end of free tuition at CUNY and UCAL claimed another casualty — organized student activism. Free tuition had changed the ethnic and racial mix on both campuses. To a large extent, Black and Hispanic students were protest leaders. When free tuition ended, these students, many from low-income families, took on massive debt loads. As right-wing Reaganites had counted on – campus activism took a major hit.

Today, students face unprecedented economic challenges. 71% are in debt peonage, owing an average of $28,400 when they leave school. For the 11.2% who have either defaulted or are more than 90 days late, their loans will eventually balloon to three or four times what they actually borrowed. Even those who keep up their payments will see their loans double as interest mounts up. With the Trump administration creating new hoops for debtors to jump through —possibly not honoring the terms of Obama’s Loan Forgiveness Program for 400,000 public sector workers who were promised debt forgiveness after 10 years, slashing by 2.9 million the number of low-income students eligible for subsidized loans (interest-free while in school), imposing new fees up to 16% of the total loan balance even on student borrowers who agree to pay off their outstanding balance, all that and a recent report from the New York Federal Reserve bank that 44% of student borrowers are underemployed—is it any wonder that few will risk joining a protest or any other form of collective action.

A nation of debtors shouldn’t be “who we are.” (Obama). A fractured society at odds with its youngest generation and standing behind ideological barricades needs to take stock of itself. Wiping out student loans and ending the tuition nightmare for succeeding generations is a step in the right direction. A view not shared by US oligarchs in charge of all three branches of government.

They’re in a defensive crouch determined to protect their fiefdoms. Fusion centers, SWAT teams, surveillance so massive that to store it requires numerical designations like “yottabytes” equal to 500 quintillion (18 zeroes) pages of text, zero tolerance for peaceful, non-violent protest and preventive policing (stop and frisk, SWAT teams to serve warrants) point to a government choosing to subdue its citizens rather than address their concerns.

Think about it. The richest country in the world has the resources to free 44 million of its own from the stranglehold of debt and end it for future generations but chooses instead to spend upwards of $5 trillion and counting on failed wars and $12-15 trillion to bail out criminogenic banks and bankers. Young people deserve to have dreams, to fashion their future without the burden of debt. They have the right to protest, to petition their government for redress of grievances. Perhaps those of us who are not so young and have little to lose should mount our own protest. Pitchforks anyone? 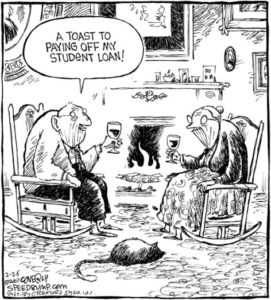