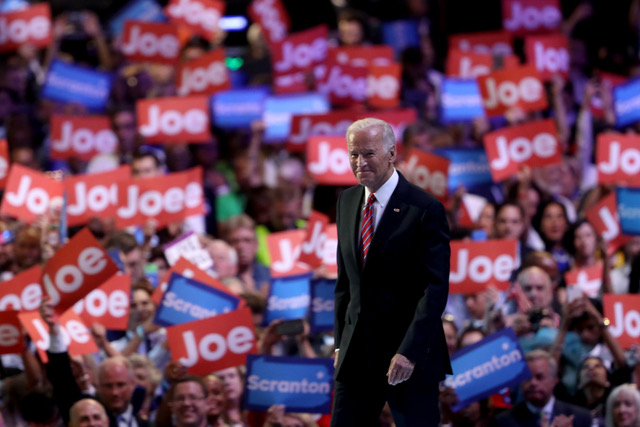 It’s beginning to look a lot like —not Christmas exactly but the arrival of the gift that keeps on giving — Joe Biden’s third attempt at the presidential sweepstakes. Yep, while a mere lad in presidential terms, he made a grab for the gold in 1988 only to fall victim to the “aw shucks” weasel from Arkansas. An older (much older) and wiser (more cunning) Biden threw his hat into the ring in 2008, but the “hopey, changey” guy and his rich backers had it all sewn up.  As we approach 2020, an even older, though not necessarily wiser Biden, marches to the beat of his not yet extinguished presidential aspirations.

For those of you who don’t know or aren’t old enough to have lived through it, here’s the Cliff notes version of Joe’s career – a troubling tale of politics over principle, betrayal of the public trust to serve the interests of wealthy backers and his son, and a craven subservience to the shrillest voices of reactionary politics. Throughout his career, much like Obama, his boss from 2009 to 2017, high-minded rhetoric has masked a paucity of achievement, and half-truths, misrepresentations and outright lies have been used to defend the indefensible.

The earliest and, in some ways, deadliest example of his surrender to out-sized ambition occurred more than forty years ago.  In 1972, at age 29, Biden launched what would ultimately prove to be a successful campaign for a senate seat in Delaware. During the campaign, he gave impassioned homilies on his support for school desegregation and busing. Like most elements of a successful run for office, campaign promises are fungible.  With the uncanny political instincts that have made him a successful politician rather than a visionary leader, Senator Biden sensed “the times they are a changing.”  Lofty campaign promises gave way to the realities of political maneuvering and busing suddenly became “forced integration.” 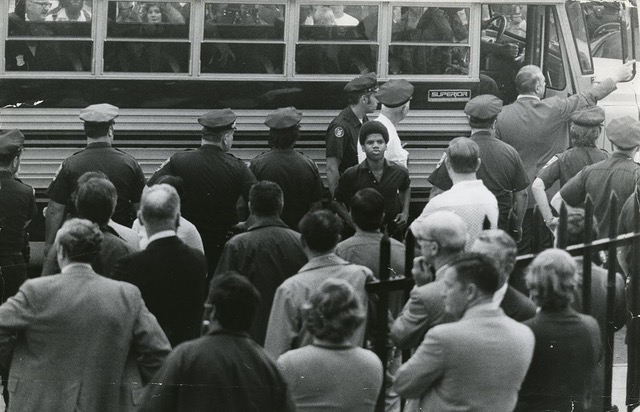 With the short, unfocused memories of voters, it was easy to wriggle his way out of an impending disaster. He used the old John Kerry excuse: “I was for busing before I was against it.”  Then he called busing the “atom bomb of anti-desegregation weapons…the single most devastating issue that could occur in Delaware.” In case there were any lingering doubts in the minds of Delaware bigots, he put the icing on the cake in a 1975 speech in Congress — “[I am] convinced busing is a bankrupt policy.”

With his new-found epiphany, what’s a bottom-feeding senator to do? Join with his buddy, arch-segregationist Strom Thurmond (who had run for president in 1948 as the “states’ rights,” aka segregation party candidate) to propose an amendment that prohibited HEW (Health. Education, and Welfare Department, now called the Department of Health and Human Services) from assigning teachers or students to schools for reasons of race. Bye-Bye busing, admittedly the fastest way to achieve integrated schools. This is the same Joe Biden that later on would insist to anyone who would listen that he went into politics to “fight the Strom Thurmonds.”

Another one of his bosom buddies, chief senate bigot of his time, Jesse Helms, came up with a little ditty (Helms-Collins amendment) in 1980 that would prevent the Department of Justice from bringing desegregation suits. Joe Biden’s response: “Where do I sign?” It turned out that enough outraged voices were raised to defeat the measure.

To hardly anyone’s surprise, Biden’s most recent defense of his dark integration past contradicts the facts. As Joe tells it — “I cast the deciding vote to allow courts to keep busing as a remedy. Because there are some things that are worth losing over. These rhetorical gymnastics ring extraordinarily hollow in the face of his 2007 declaration that busing is a “liberal train wreck” and his far-too numerous claims of the “evils” of busing and “forced integration”. 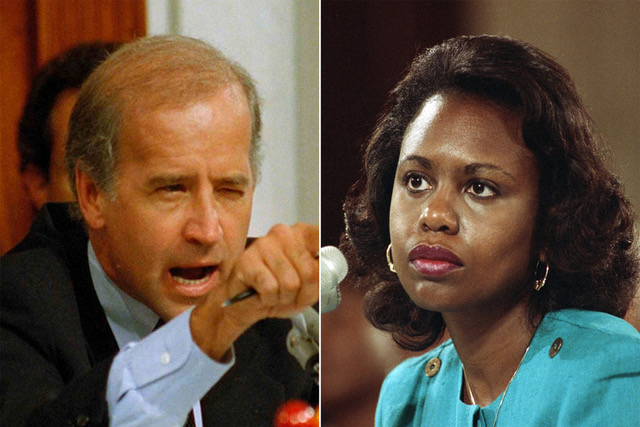 Biden’s moral vision was about to take another hit. As chairman of the senate Judiciary Committee in 1991, he presided over the Clarence Thomas confirmation hearing. When Anita Hill stepped forward to accuse Thomas of sexual harassment, the hearing devolved into a show of political expediency. Although Biden tried to frame his conduct as “a victory for decency,” most of the members of his own party saw it as politics as usual. Howard Metzenbaum, democratic senator on the Judiciary Committee, didn’t mince words: “Joe bent over too far to accommodate the Republicans who were going to get Thomas on the Court come hell or high water.” Former representative Pat Schroeder, one of seven women representatives who marched over to the senate in a vain attempt to delay the vote, was stinging in her rebuke — “To have railroaded that through… and let his [Biden’s] colleagues absolutely tear her apart was absolutely horrible.”

At the time, Democrats controlled the Senate 57-43 and thus held the majority on the Judiciary Committee including the chairmanship. Clarence Thomas was an appointee of a Republican president, George H.W. Bush. That didn’t seem to faze Biden. He was “all in” for Thomas. Although he had the power to delay the vote on Thomas’ nomination, he instead rushed ahead to confirmation explaining: “I see no reason why the additional public disclosure of the allegations —but no new information about the charges themselves —should change this decision.”

Why did Biden fail to take a long, hard look at Anita Hill’s charges, particularly in light of  Clarence Thomas’ reputation for favoring far-right political causes? As he has throughout his career, Biden’s self-interest was miles ahead of his concern for the impact of adding a far-right judge to the Supreme Court. In the Biden lexicon reading the tea leaves (aka public opinion polls) was the real decision-maker. At the time the polls showed 47% of the public in Thomas’ corner and only 24% in Hill’s. Clarence Thomas would later claim that Biden had told him that he would always be Thomas’ “most adamant and vigorous defender.” In light of the way he conducted the hearings, bowing to almost all Republican demands —Thomas testified first and appeared later to rebut Hill’s charges and no witnesses were called to testify about Thomas’ history of interest in pornography — it’s hard to find another conclusion too fit the facts.

As he did with the busing imbroglio, Biden rejiggered his behavior as the public cooled on Thomas. By the end of 1992, only 34% believed Thomas, while Hill’s version of events had 44% support. Biden was the first to jump off the Thomas bandwagon — “[I have acted] in fairness to Thomas which, in retrospect, he didn’t deserve.”  In 2018, as another shot at the brass ring hove into view, Biden proceeded to rewrite history — “I wish I had been able to do more for Anita Hill…I owe her an apology.” Talk is cheap, no apology has yet been offered or accepted. 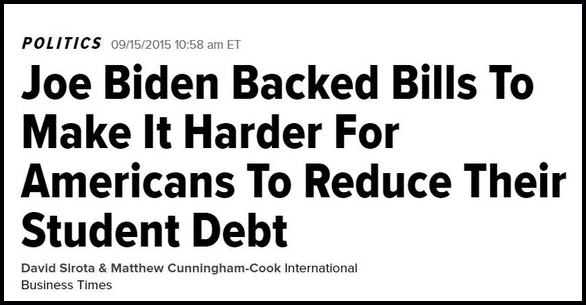 Any hope that a new century would have a beneficial effect on the moral vision of Joe Biden disappeared in 2005 with his robust and ultimately successful campaign to pass the Bankruptcy Abuse Prevention and Consumer Protection Act of 2005. As far as mean-spirited legislation goes, this one tops the list. The bill prohibits millions of people, struggling under a mountain of student debt, from discharging their debts in bankruptcy. Student debt thus became the only form of consumer debt not subject to bankruptcy protection. Also targeted by the vicious provisions of the 2005 bill were low income working people, single mothers, minorities, and the elderly. The bill’s provisions were so mean-spirited that even a few Republicans tried to soften the blow. Republican John Cornyn introduced an amendment to stop corporations from “judge shopping” (finding friendly courts for bankruptcy cases). Although this provision had bipartisan support, Biden prevented its inclusion. He was Johnny-on-the-spot when it came to defeating an amendment to sanction predatory lenders. Even an amendment, supported by his future boss Obama, aimed at strengthening protections for service members or those forced into bankruptcy because of medical debt didn’t survive the Biden axe.

What compelling public interest motivated his herculean efforts to pass the bill? Could it be the coincidence that a major Delaware financial behemoth stood to gain millions from its passage and happened to be Biden’s largest single donor. Or maybe it was the lucrative consulting contract the same financial institution had conferred on one of his sons. Barack Obama had to do a lot of fancy rhetorical footwork when he selected Biden as his running mate — “Senator Biden took on entrenched financial interests and succeeded in improving the bill…legislating requires compromises…Congress worked on the bankruptcy bill for nearly a decade…to forge a bipartisan compromise.”  Translation: we passed a bill to further enrich already enormously wealthy financial interests as soon as we thought no one was looking. Actually a few people were looking and they were unsparing in their take-downs — “It is perverse and obscene…We are creating a generation of indentured people. It is mind-boggling that we would do it to a whole generation of young people.” (David Austin, law professor)

That’s it folks the skinny on Joe Biden: his career reflects the moral crisis of U.S. leadership. Championing the cause of segregationists, lacking the will to stop an unqualified and right-wing nominee from a seat on the Supreme Court and using his political muscle to do the financial industry’s bidding — Joe Biden’s greatest hits. Missing from his “accomplishments” — programs for the vast majority of Americans who are badly in need of a friend in the White House.

Don’t think Joe Biden’s inglorious career is an exception to the rule. His machinations are part  of the tool kit of the vast majority of senators and representatives on display every day in congress — sell-outs, the democratic senate minority leader making a deal with the republican majority leader to confirm the nomination of fifteen far-right federal court judges; betrayals, the mounting student debt of forty-five million young people with no relief in sight; the consensus for permanent war, the ratcheting up of the defense budget and the bipartisan push for fragmenting the social safety net to pay for tax breaks for the wealthy and corporate welfare for the defense industry. There are a lot of Joe Biden wannabees in congress and lots of them are running for president in 2020.

The leadership they embody is more of the same failed leadership the U.S. has endured for generations. The U.S. is running out of time to find a new blueprint for leadership, not based on the biggest war chest but on a more humane, less America first, more peace-loving moral vision. As the social order crumbles, and income inequality takes a huge bite out of the lives of most Americans, and perpetual war becomes official U.S. foreign policy, the time is ripe to install a different species of leader to take on the challenges of a government that has lost its way. It’s a momentous undertaking and requires an individual with unsullied moral credentials. Joe Biden need not apply.