Say you shop at Whole Foods (aka Whole Paycheck)? Or fatten Amazon’s bottom line. Or, heaven forbid, you periodically sneak into Walmart. If you answered yes to any of the above, hold onto your hats (and grab your blood pressure meds), this Nightmare on Elm Street is for you.

Once upon a time there were three fat cat barons looking to beat each other to profit nirvana in the grocery business. First up John Mackey, co-founder and CEO of Whole Foods described by an ex-employee as a “nut.” As it turns out, a rich nut with an estimated net worth of $75 million. He got rich the old-fashioned way — bamboozling prosperous upper and middle class naifs into believing that eating his high-priced food, consuming his overpriced vitamins, and adorning themselves with his pricey cosmetics was the prescription for living forever (at least a lot longer than less well-fixed non-Whole Foods shoppers). With more than 460 stores in the U.S., Canada, and Great Britain, Whole Foods take was $16 billion dollars in 2016.

While customers were feeling the love, how were employees doing? See for yourself. Take the tricky business of employer-provided healthcare. In a workplace full of young workers eligible for excellent health insurance for peanuts, the “Good Foods Guru” chose a health care plan with a $2,000 medical deductible, a $1,000 prescription drug deductible and some cheesy health saving accounts. Here’s how the Maestro defended the indefensible in a 2009 Wall Street Journal op-ed — [Americans have no] “intrinsic ethical right to health care– to universal doctors, medicines and hospitals…A careful reading of both The Declaration of Independence and the Constitution will not reveal any intrinsic right to health care, food or shelter, because there isn’t any. This ‘right’ has never existed in America.” Leaving a Whole Foods employee two choices — Don’t get sick or Die quickly (the preferred Republican solution). True to their liberal pretensions, 20,000 Whole Foods customers signed a Boycott Whole Foods pledge (that lasted until they ran out of edamame).

To keep fat cat investors happy, Mackey did everything a rich, swinish mogul would do to goose earnings. Cutting costs was bright idea numero uno. In 2015, 1,500 workers got the heave-ho. Earnings still took a dive, not helped by revelations in 2017 that WF had overcharged customers by phonying up the weights of pre-packaged foods in its New York City store. That’s when our hero decided to get out of Dodge, negotiating a deal with Amazon and its founder Jeff Bezos, the richest dude in the world, to buy the company for $13.7 billion.

Here’s what the change in ownership accomplished. Meet Jeff Bezos —another corporate plunderer with zero values other than personal enrichment and zero vision other than the reintroduction of the “peculiar institution” as described in a recent article “Amazon’s White Collar Salary Slaves.” 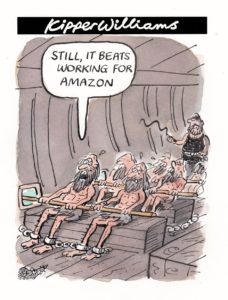 Horror stories abound about this online den of inequity. Exhibit A—The Amazon employee who had the “nerve” to contract breast cancer. The big wigs took a dim view of her “lapse” and put her on a “performance improvement plan” owing to the “difficulty” in her personal life. Working conditions are another head scratcher. Amazon was too cheap to air condition one Pennsylvania warehouse where workers were expected to walk as many as 15 miles per day. Amazon wasn’t too cheap to install an electronic monitoring system to keep employees on their toes. To keep up the pretense of an employee-friendly workplace, Amazon made sure to have a bevy of ambulances nearby to speed heat stroke employees to the emergency room (where they probably needed their Medicaid cards to get treated). Head honcho Bezos bragged about Amazon’s corporate ethic (for employees) “do more for less” in a 2012 Fortune article “we pay very low cash compensation relative to most companies.”

Nevertheless, as corporate cultures go, Walmart is light years ahead of the other inhabitants, Whole Foods and Amazon, of the evil empire— being anti-union, monumentally stingy with a long-running history of workplace violations. In 2014, Walmart was accused of unlawfully retaliating against or threatening workers who took part in strikes and protests. Particularly infuriating when you consider that, the Walton clan, Walmart’s owners, are the wealthiest family in the U.S. with a combined net worth of $145 billion—equal to the total net worth of the bottom 40% of Americans. Walmart’s CEO takes home $25.6 million per year —1,133 times that of Walmart’s median worker ($22,591)

Bottom line? Walmart, Whole Foods/Amazon have squeezed out the competition leaving most of us at the mercy of three behemoths manipulating our buying choices, managing our tastes and preferences and worming every last dollar out of us.

What does the future hold for a society where three corporations control most of the U.S. consumer landscape and six men command more of the world’s wealth than half the world’s population? (Five of the six are Americans, Bezos is one) Even the father of modern capitalism, speaking in the same year as the American Declaration of Independence, decried such a state of affairs “No society can surely be flourishing and happy, of which the far greater part of the members are poor and miserable.” (Adam Smith, 1776)

Read our earlier article about this subject – click here