(FOR A QUICKER SHORTER READ SCROLL DOWN TO THE BLUE FONT)

Know how you can tell when an empire is going to hell? When its future depends on a bunch of junkies. Too harsh a judgment? Read on. Quality of life issues abound in today’s America. Lead poisoning causing irreversible brain damage to thousands of children. Loss of life and property from devastating fracking-related earthquakes. A profit-driven, free market healthcare system that is the butt of jokes all over the world.  Bad as they are, there’s a worse threat facing America: Drug Abuse. 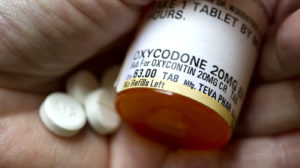 Turns out we’re a pill-popping nation with devastating consequences. Although only a tiny segment, 4.6%, of the world’s population, we manage to consume 81% of the world’s oxycodone (highly addictive opioid). The leading cause of death for Americans under 50 is now opioid abuse leading to overdose deaths. Where does that leave us? A nation with millions of Americans who are too stoned to hold jobs, raise families or participate in the “good life” we are taught to believe is our due. In 2016, the death toll from drug abuse was 60,000, a 20% increase over the 52,000 that breathed their last in 2015. Drug overdoses have become the most common reason for 911 calls. Firemen across the country respond to more drug overdose emergencies than fires. In 2016, 2.6 million of us were battling addiction caused by prescription pain killers.  Another 600,000 were hooked on heroin whose use is coincidentally on the upswing.  Out of necessity. 80% of new heroin users switched to that cheaper drug when they could no longer get “legal” prescriptions or couldn’t afford to purchase prescription meds on the thriving black market. 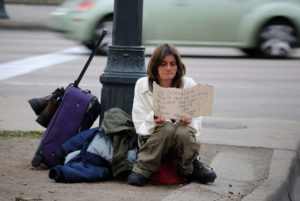 The statistics are grim but the reality behind them worse. Every one of those 112,000 people who died in 2015 and 2016 left people who loved them, who grieved for them, whose lives have been permanently altered by their loss.

To solve the riddle of this disturbing phenomenon, we must go back almost twenty years to 1999. That’s when the pharmaceutical industry caught the eye of Wall Street and the shadow bankers. Prowling every corner of the U.S. corporate landscape, these coyotes finally spotted what they had been looking for: an industry that could return outsize profits to financiers willing to take a risk. It worked. Pharma became a one-half trillion-dollar behemoth spewing out profits. One segment in particular presented a golden opportunity and that’s where the smart money went— straight to the manufacturers of prescription pain killers. With the big money behind the opioid producers, profits soared.  Of course, it took some sleazy maneuvering — convincing patients that any level of pain was un-American, that the addiction risk was overblown, that the government wanted you to suffer. The kingmakers in banking and their corporate allies in Pharma never blinked. The name of the game was making money and everything else was collateral damage. 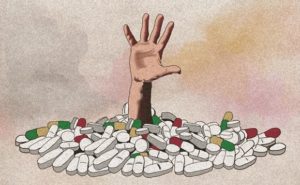 The late nineties were the watershed years when one company in particular, Purdue Pharma, hit the jackpot with Oxycontin, marketed as a “magic cure” for chronic pain — lower back pain, migraines, fibromyalgia, hang nails. All they had to do was convince doctors and their patients that opioids were the ticket to a pain-free paradise, the risk of addiction less than 1%. In all a gift from mother nature. Much like another infamous lie — cigarettes don’t cause cancer.

Being American requires a short memory and a willing suspension of disbelief. Even those who should have remembered didn’t stop to consider opioids’ checkered history, like the opioid epidemics that occurred in the thirties, forties and fifties. In the sixties, there was Vietnam —20% of U.S. troops returned to America hooked on heroin. But that was ancient history for both drug makers and their victims. Sadly, the most vocal supporters of unrestricted use of opioids were patients who accused the government of denying them “pain relief.”  More pressure was applied as Pharma got the opioid ball rolling. Between 1996 and 2002, Purdue Pharma sponsored or ran more than 20,000 “educational” programs to encourage the long- term use of opioid painkillers. To give the message more punch, they ran ads featuring “Real Life” stories of patients who had “gotten their life back” through the use of opioids. All their marketing strategies had one goal: to deliver the message that under-prescribing opioids was a crime. Professional societies that should have and probably did know better also jumped on the train before it rolled out of the station. Most of them, beneficiaries of opioid makers’ largesse, had large membership lists and were perfect vehicles for spreading the word, “advocate[ing] for more aggressive identification and treatment of pain, especially use of [opioid painkillers]. (Vox Media) 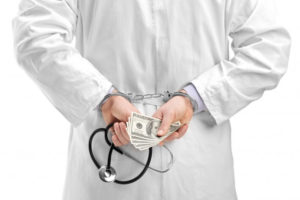 What’s a poor doctor to do? As the marketing schemes of the opioid drug companies reached fever pitch, doctors, particularly primary care physicians (who write one-half of all opioid prescription in the U.S.) found they could solve most of their patients’ complaints in the less than 15 minutes per visit their insurance companies allowed them with a quick, easy “cure” — a prescription for Oxycontin, Percaset or Vicodin or a raft of similar meds. Doctors more inclined to skepticism risked losing patients (revenues) in the stampede for this new “miracle cure.” Faced with diminishing revenues, all but the bravest (and there were scant few of them) got with the program.

By the late 1990s, opioids were the standard treatment for any kind of pain. But a major complication threatened to derail the profit train —the dawning realization that a lot more than 1% of opioid users were showing signs of addiction. Never a group to lack creative solutions, the drug companies developed a new condition called pseudo addiction and paid a number of doctors, considered, experts in the field of pain management, to hawk this “pseudo condition.” Here how one of their doctor shills describes it “pseudo addiction is relief-seeking behavior mistaken as drug addiction.”

Did it work? Like gang busters. Since Oxycontin was released in 1995, it has generated $35 billion for Purdue Pharmaceuticals. In 2015, the Sacklers, owners of Purdue, made the Forbes list of the world’s richest people with a fortune estimated at $14 billion. Not a bad reward for being the leading cause of accidental death in America. More alarming, they’re only one of the four or five drug companies whose livelihood depends on Americans’ gullibility. Unlike the claims of the opioid-producing companies, statistics do exist that you can take to the bank. 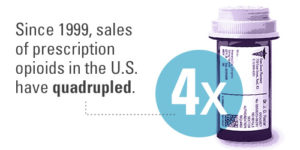 Between 1999-2014, sales of prescription opioids quadrupled, while the overall amount of pain American reported didn’t change (CDC – Centers on Disease Control). That wake-up call fell on deaf ears. On the other hand, the media was all over the story that the FDA levied fines of $634 million against Purdue in 2009. Their crime: lying to the public. For a company making $3 billion annually on one drug, that wasn’t even a rounding error.

What’s to be done? Many suggestions, few solutions. Sure, we could require prescribers to undergo mandatory education on the risk-reward of opioids, the FDA could issue prescribing guidelines for opioids and eliminate “pill mills” — medical facilities that routinely prescribe opioids to all comers, often in violation of state laws. 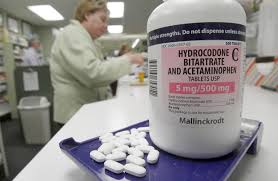 As solutions go, these sound “right.” Little else recommends them . Here’s just a few examples of why “friendly persuasion” is a non-starter. According to the National Safety Council, even with the dangers of opioid addiction spotlighted on every media outlet, 99% of doctors exceed the recommendation for a three-day dosage limit on opioids. Twenty-five percent write opioid prescriptions for one month. An even better example of why voluntary compliance won’t stem the tide occurred last week when the FDA asked Endo Pharmaceuticals to voluntarily withdraw from the market its powerful opioid Opana ER due to the “public health consequences of abuse.” Here’s how Endo responded to that reasonable request to withdraw an opioid twice as powerful as Oxycontin responsible not only for many deaths but also for an explosion in the number of cases of Hepatitis C—“Despite the FDA’s request to withdraw Opana ER from the market…Endo remains confident in the body of evidence established through clinical research demonstrating that Opana ER has a favorable risk-benefit profile when used as intended in appropriate patients.”

So much for guidelines, prescriber education, even more public awareness — if these recommendations work at all, they certainly won’t work quickly enough to halt the slaughter of Americans, most young and in the prime of their lives. What stands the best chance of working is happening in five or six states where Attorneys Generals are taking the bull by the horns and suing opioid drug makers for causing a major public health crisis. 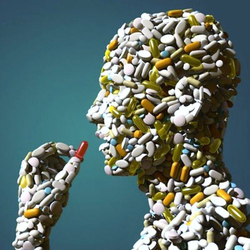 In Ohio, the epi-center of the epidemic where over 200,000 residents are in the addiction loop, Attorney General Mike DeWine announced a law suit again the five biggest opioid drug makers claiming that “the[es] drug companies engaged in fraudulent marketing regarding the risks and benefits of prescription opioids which fueled Ohio’s opioid epidemic.” Here’s Purdue’s excuse: “OxyContin accounts for less than 2 percent of the opioid analgesic prescription market nationally, but we are an industry leader in the development of abuse-deterrent technology, advocating for the use of prescription drug monitoring programs and supporting access to Naloxone.” 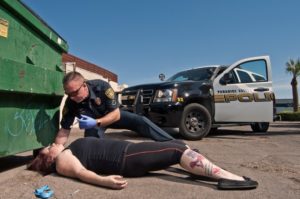 While we’re on the subject of Naxalone (Narcan), the antidote to resuscitate overdose victims if administered quickly enough — the drug companies have doubled or in some cases tripled the price of this life-saving drug, putting it out of the reach of many towns and cities in the U.S. and leaving first responders without their most powerful weapon for saving lives.

It’s time to cut Pharma down to size and make them pay for the carnage— the lives lost and those damaged beyond repair. What they can’t pay for is the damage to America’s sense of itself as a powerful force for good in the world. Whether that belief is true or has ever been true, it is woven into the fabric of what it means to be an American. 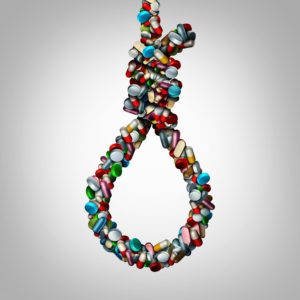 Reeling from one catastrophe to another, perpetual war in all corners of the globe, intractable poverty in the richest county in the world and now a major epidemic of drug abuse and death powered by greed, this generation of Americans no longer believes in the power of the American way of life to serve as a model for other countries in the world.

In pursuing their suit against the opioid makers, the Attorneys Generals in these five states have taken the first step in what may become an all-out war against greedy, manipulative companies with a pipeline to our bought and paid for politicians. We can all help bring these blood-sucking, rapacious corporations to their knees.  Ask your legislators if they’re taking dirty money from these serial killers. If they are, let them know “you’re mad as hell and you’re not going to take this anymore.”

Make sure your PCP has altered her prescribing habits in the wake of this epidemic. Don’t choose doctors who make a routine practice of substituting the prescription pad for an examination. And most important, squeeze Pharma’s bottom line. Stop buying these dangerous and ultimately useless products. Rest assured Pharma won’t make them if we refuse to buy them. It’s the multiplier effect that will drive Pharma out of the opioid business and save thousands of American lives.

*** UPDATED ***
To read an update to this report read Here –
Update on “Drug Companies: Killing Americans in the Name of Profits”