Unimaginable as it may seem, among the hordes running for the Democratic nomination, the pundits and talking heads, not to mention the self-described liberal press, the impeachment frenzy has reached fever pitch since the non-event (aka the Mueller report) went public. Elizabeth Warren looking for the traction noticeably lacking in her campaign jumped on the impeachment bandwagon first — “The severity of this misconduct demands that elected officials in both parties set aside political considerations and do their constitutional duty. That means the House should initiate impeachment proceedings against the President of the United States.” (4/19) The rest quickly took one of three positions: calling for outright impeachment, demanding the unredacted Muller report or vowing to go the congressional hearing route.

The press and pundits were on both sides of the issue — impeach him in the House and hope for a miracle in the Senate to get him booted. Note the headline in the March issue of The Atlantic — “Impeach Donald Trump.”  A separate contingent believing that a conviction in the Senate was the impossible dream was content to put a scarlet A on Trump’s presidency by impeaching him in the House. Here’s the self-described Progressive pundit Cenk Uygur on Young Turks — “You do the right thing. You impeach him in the House.”

In DC representative and senators were bellying up to the microphones to take a stand. Speaker of the House and leader of the centrist democrats cautioned her flock to continue the myriad of House investigations into Trump’s “highly unethical and unscrupulous behavior” but to refrain from proceeding with impeachment. That wasn’t the view of most of the first term “firebrand” representatives who have been campaigning for impeachment since taking the oath of office. “Mueller’s report is clear in pointing to Congress’ responsibility in investigating obstruction of justice by the President…As such, I’ll be signing onto @RashidaTlaib’s impeachment resolution.” [Rep. Alexandria Ocasio Cortez (D) NY]. “I believe that impeachment is inevitable…” [Rep. Ilan Omar (D) MI].

Almost forgotten in the clamor coming out of Washington are the voices of the American people. Have they hopped on the impeachment train or are they still worrying about this month’s student loan payment, the doctor visit they cancelled because they couldn’t pay the deductible, the prescription they put in a drawer because they had to pay the rent and buy food for the family or the tuition bill they’re not sure they can pay? To answer that question, last week Gallup conducted a poll asking Americans two questions. Did Trump tell the truth about the investigation? Fifty-eight percent believed he lied, while only 31% believed he told the truth. But the figures went sideways when asked if Congress should begin impeachment proceedings. The majority —56%— wanted impeachment off the table, while 37% were in favor of impeachment. (NBC News) Moral: while voters believe their president is a liar, obviously it does not make him unfit to be the U.S. president. See How Many Presidents Lied their Way into the White House? All of Them to get a line on the cynicism of the American public 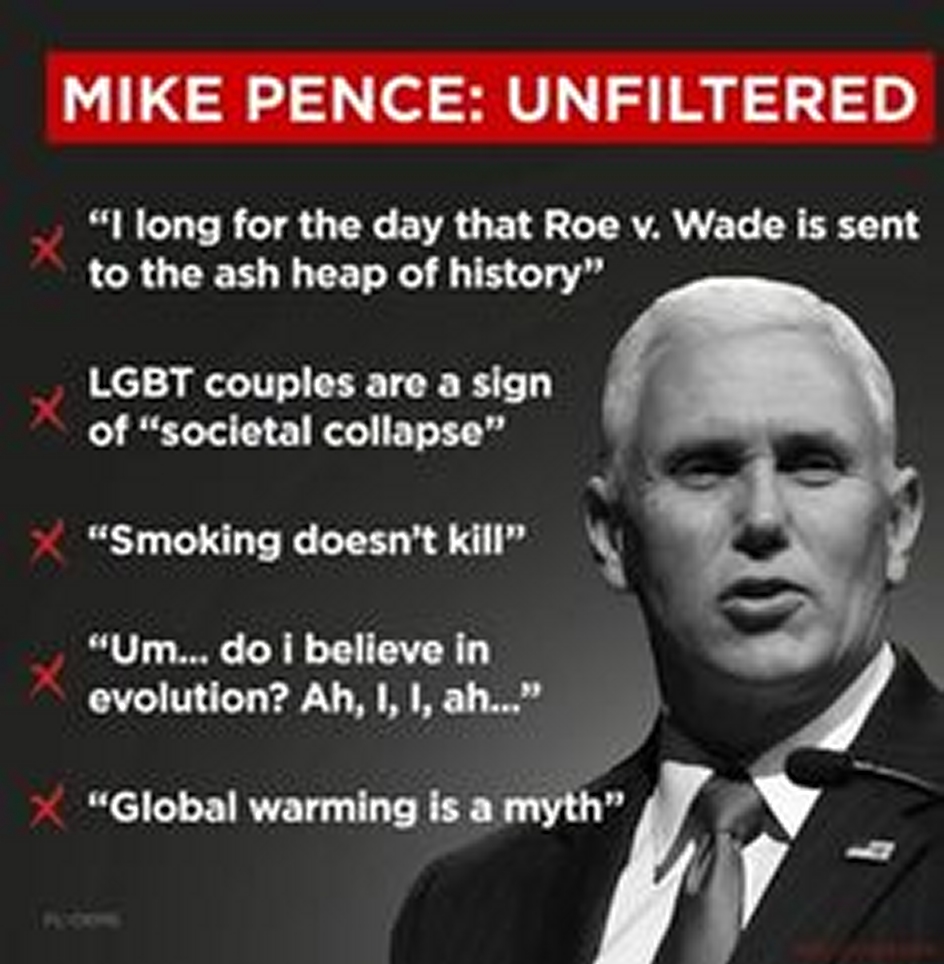 Since no one in Washington is listening to the people, impeachment may well be on the agenda. What happens then? Probably nothing as the Senate is unlikely to convict him. But if a few Republican senators defy the odds and vote to convict, Mike Pence becomes the 46th president. Instead of a brain-addled, mercurial, stubborn, politically inept (except with his base) critter who occasionally comes out on the right side for the wrong reasons (leaving Syria, doing an end run around a new cold war with Russia), Americans have inherited a far more cunning operator who knows his way around Congress, a super ambitious, bought-and-paid for pawn of the likes of the Koch brothers and other far-right Neanderthals. His fealty to the Kochs has been absolute since they donated $200,000 to his 2012 gubernatorial campaign. Environmental issues? Leave it to the guy who in 2009, speaking for the Kochs and the rest of the fossil fuel industry, led the successful opposition to a climate-friendly “cap and trade” bill. Global warming, according to Pence is “a myth created by environmentalists in their latest ‘Chicken Little’ attempt to raise taxes.”

Mike Pence’s resume is full of red lights. When asked, he has described himself as “a Christian, a conservative, and a Republican, in that order.” In the early nineties as his suffocating brand of evangelical Christianity was making waves in Indiana, his home state, he joined the board of the Indiana Family Institute, a right wing “think tank” advocating the criminalization of abortion and opposing equal rights for gays. As one of the most vocal supporters of this agenda, Pence was soon appointed to head another hard-right operation, the Indiana Policy Review Foundation. Shortly after his arrival, a polemic emerged arguing that unmarried women should be denied access to birth control. It soon became apparent to all that “He was as far right as you could go without falling off the earth but he never really put a foot wrong politically. Beneath the Bible-thumping earnestness was a calculating and ambitious pol.” (Mike Lofgren, former Republican staff member). 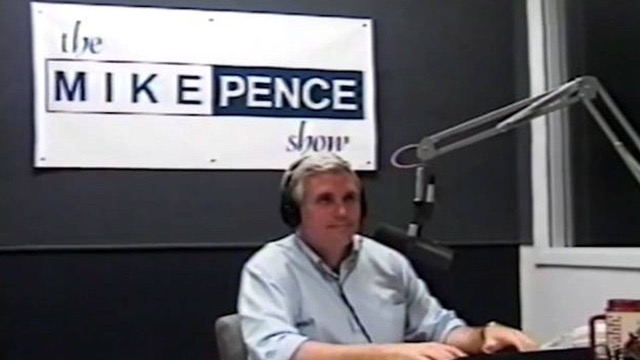 After a couple of unsuccessful runs for Congress in the early nineties, he hosted a conservative radio talk show. Known as “His Mikeness” he was a leading voice in the family values army. Pence had lots of bête noires —assisted suicide, insufficient punishment given to a female Air Force pilot charged with involvement in an extramarital affair – “Is adultery no longer a big deal in Indiana and in America.”  He defended Big Tobacco – “Despite the hysteria from the political class and the media, smoking doesn’t kill,” His Mikeness unflinchingly pointed to the real “scourge” afflicting American society— “big government disguised in do-gooder healthcare rhetoric.” But that wasn’t the only cancer trying to destroy Reagan’s “shining city on a hill.” A far greater danger to the American “way of life,” he affirmed was the growing use of day care by working mothers— “pop culture has sold the big lie that ‘Mom doesn’t matter.’” His listeners ate it up.

Given the growing popularity of his radio persona, in 2001 he sailed into Congress with a twelve-point edge. One of the most popular items on his agenda — his promise to oppose “any effort to recognize homosexuals as a discrete…minority entitled to the protection of anti-discrimination laws.”  His congressional stint was marked by the authorship of zero successful bills, although he did introduce sixty-three bills, the most notable of which was The Child Pornography Prevention Act whose real target was anything the evangelical Christian right considered obscene (almost everything in modern culture). His other “successes” included his 2002 vote for the Iraq War, his 2006 support of a constitutional amendment banning same sex marriage (which received 236 yes votes but needed 290 to pass), and his focus on the battle to restrict abortion and defund Planned Parenthood. He even threatened to shut down the government if he didn’t get his way. (Sound familiar?)

Overall, his congressional tenure was noted more for the prayer sessions he ran for his staff and less for his insight into the issues shaping twenty-first century America. Many of his colleagues called him “Mike Dense” behind his back. Even President Trump got into the act in a discussion of gay rights: “Don’t ask that guy [Pence]—he wants to hang them all!” 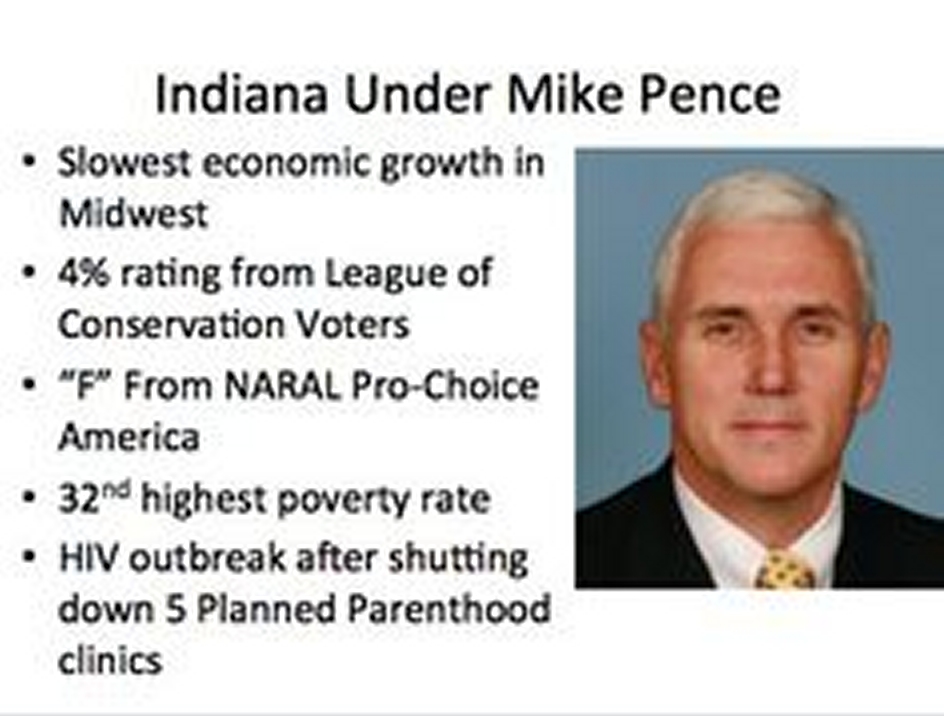 Although he made an exploratory investigation into the 2012 presidential race, wiser heads prevailed and he ran for governor instead. As Indiana governor, he made his conservative bones cutting taxes on “job creators,” eliminating the estate tax (a Koch fav), campaigning against labor unions and enacting some of the most conservative health care “reforms” in the nation including demonic abortion restrictions (later overturned by a federal court) and made national headlines with his stand against accepting Syrian refugees into Indiana. All the while the drumbeat of unfettered ambition charted his course. In 2013, Governor Pence forced the closure of five Planned Parenthood offices, none of which offered abortion services, all of which offered HIV testing. The result —a noticeable spike in HIV cases in Indiana.

Perhaps his most flagrant use of his gubernatorial powers was his signing of the Religious Freedom Restoration Act giving the green light to business owners to deny service to gay customers (an atrocious law given a second life by the Supreme Court https://www.oyez.org/cases/2017/16-111)  Unfortunately for his career, it turned out to be a boneheaded move. The cries of rage around the country threatened to sink his outsized ambition. Not one to let principle interfere with ambition, he revised the bill and moderated its provisions. Too little, too late, Mike Pence’s chance to be the Republican presidential nominee in 2016 evaporated.

But all was not lost. As one of his Indiana home-boys pointed out “Mike Pence clearly would like to be in the White House…Everybody knows he would like to be in the White House, and one way to get there is by being the VP.” (Andrew Downs, Indiana Politician) The campaign to make Pence Trump’s vice president was of the hydra-headed variety. First the endorsements: Kellyanne Conway, one of Trump’s most trusted advisors, portrayed him as a bridge to Christian conservatives (aka Trump’s base), an asset in the Midwest, and a connection to the powerful Koch network (which missed the Trump train in the early going). Steve Bannon, Trump’s campaign manager, was somewhat less enthusiastic referring to Pence’s suitability as “an unfortunate necessity.”

Second on the agenda was some real-time ass kissing. Pence was the man to pull it off. Never one to shy away from cringe-worthy activities in service to grand ambition, Pence spotted Trump’s predilection for advisors who massaged his overblown ego. Over and over, he assured Trump “You’re going to be the next president of the United States… It would be the honor of a lifetime to serve you.” To cement his bona fides with the boss, Pence was quick to tell reporters after a golf game: “He beat me like a drum.” Trump, in turn, rewarded such abject subservience with the nomination. Once in office, Pence’s rhetorical excesses reached new heights: “He and I have prayed together. This is somebody who shares our views, shares our values, shares our beliefs.” (remarks to a White House gathering of the president’s evangelical advisory board). 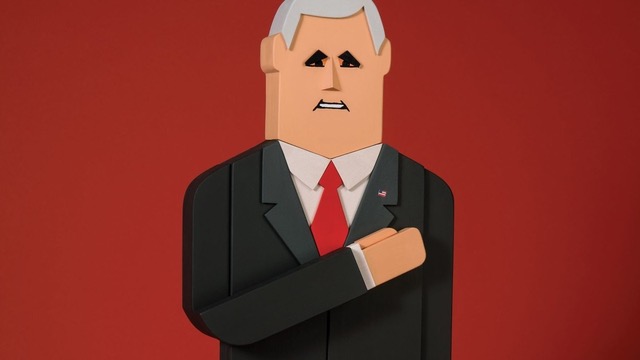 How does it come to pass that a man whose only qualification for high office is his adherence to eighteenth century notions of moral, political, and social values, who believes that homosexuality is a “sin,” that a woman must “submit” to her husband, that evolution is an (unproven) theory, who sponsored an amendment to Obamacare making it legal for government-funded hospitals to turn away dying women needing abortions, is one of the leading voices behind the trope of perpetual war and believes the agenda of the religious right should be part of U.S. domestic and foreign policy is one heartbeat away from the Oval Office?

Let’s pretend for a moment that the progressive democrats’ wet dream comes true. Trump —impeached in the House and convicted in the Senate. Automatically, sans election, Pence becomes the 46th president of the United States. What are the odds? If history is any guide, not as bad as you might think. Of Pence’s forty-seven predecessors, nine eventually became President because of a death or resignation. As LBJ told Claire Booth Luce about becoming vice president — “I’m a gambling man, darling, and this is the only chance I’ve got.”

The Democrats are failing to see the forest for the trees. It’s okay to be “angry and upset with the conduct of [the] president” (Congresswoman Rashida Tlaib), but focusing on sending Trump packing risks takes the focus away from the issues that impact the lives of Americans and the future of their children. The U.S. is in a hell of a mess. Mike Pence and his posse would love to make it worse. Let’s not give them the chance.