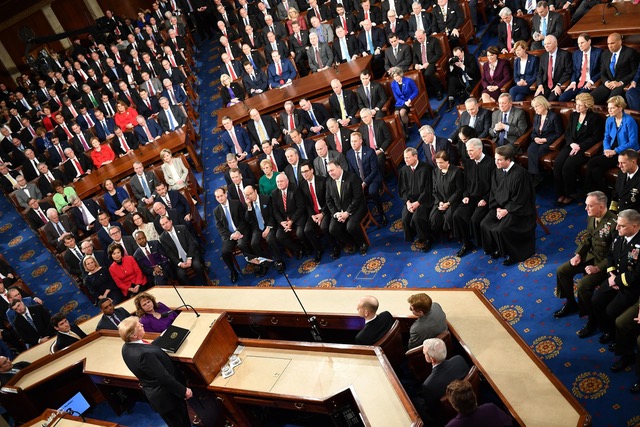 The empire’s current mouthpiece had his second annual revival meeting on February 5. Advertised as the state of the union (SOTU) by the “serious people” (corporate media shills, talking heads, pretend journalists and think tank babies), it turned out to be an eighty- minute yawner. A few intermittently entertaining moments were courtesy of the “important people” who dominated the audience. Watching Speaker Pelosi’s facial gymnastics — periodic grimaces, several grudging smiles, a few unenthusiastic claps, a well-timed headshake or two and several arm waves at her Democratic flock were worth the price of admission (free). As Madame Speaker, she occupied the space behind Trump next to that lion in winter, Mike-abortion-is-God’s-punishment-on-a-sinful-world Pence and the glacier between them almost dispelled the notion of melting Arctic ice flows. 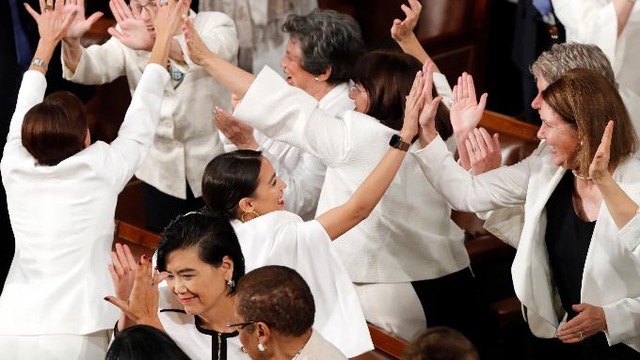 Visible in the House chamber were the white outfits worn by many congresswomen in honor of their suffrage sisters who made a dent in male political hegemony one hundred years ago. The hope is that they, their descendants, will not just wear the colors but replicate their reformist zeal on a whole range of issues —an abysmal healthcare system, sky-high costs to attend college, perpetual war, a tax system where millionaires and billionaires never pay their fair share, environmental degradation and a raft of laws and traditions that bake inequality into the remaining fragments of the American cake.

What would a congregation of Exceptionals never leave home without? That xenophobic ditty USA! USA! accompanied by raised fists or for the more reverent, hand on hearts made its embarrassing appearance several times, usually on the Republican side. The Democrats were less inclined to histrionic flourishes (as befits the party not in the White House) although there was that moment when the president hailed the number of democratic women legislators elected in 2018 — “We also have more women serving in Congress than at any time before” —prompting a mini-celebration. Here’s how Rep. Pramila Jayapal (D-Wash.) explained the women’s reaction— “We did like the fact that he gave women an opportunity to just take the floor away from him.”  That’s one way of looking at it.

The response of the “serious people” to the many troubling aspects of the speech?” It appeared they weren’t unduly disturbed by Trump’s lack of leadership on the crucial issues threatening the empire —climate change, perpetual war, growing inequality, a humongous national debt, expensive and inefficient healthcare, immigrant-bashing, and America’s involvement in coup-promotion and regime change. Instead, media reviews focused on 15 words in a 5100-word speech — “If there is going to be peace and legislation, there cannot be war and investigation.”  Business as usual for a media intent on profiting from the possible impeachment of the president.

As expected, Trump’s SOTU was full of misrepresentations, misstatements, falsehoods and downright absurdities. Like when he bragged about his administration’s handling of the economy. “We are considered far and away the hottest economy anywhere in the world.”  Somewhat true at present, but with a big asterisk. The U.S. $21 trillion national debt, largest sovereign debt in the world for a single country, is now greater than the yearly output of its economy. The question uneasy investors have started asking — Will the U.S. be able to repay that ginormous debt? The debt isn’t the only issue setting off alarm bells. The U.S. obsession to be the world’s policeman is either the reason or the excuse for the trillions it has and is planning to spend on its bloated military.  Throw in around five trillion and climbing to keep wealthy donors to both parties happy and the economic outlook grows grimmer by the day.

Then there was his paean to the January unemployment figures— “More people are working now than at any time in our history.” Depends on what you mean by working. When it comes to the official unemployment rate, the devil is in the details. The inconvenient fact that one-quarter of the jobs being produced are low-wage goes unmentioned. Further eroding trust in the official figures, workers counted as employed may work as little as one day per month. Workers arbitrarily defined as discouraged are neither counted as unemployed nor included in the labor force. Using more inclusive figures (the U-6 unemployment rate), the true state of joblessness is 8.10% more than double the 4% hyped by Trump and the media. (It should be noted that all presidents take advantage of these phony numbers to tout their economic success.)

But Trump wasn’t through trying to put lipstick on his administration’s economic pig — “We passed a massive tax cut for working families…we virtually ended the estate tax. Not so fast, Mr. President. Lots to unpack here. The simplest way to judge the effect of a tax cut on “working families” —does it really cut taxes for the majority of Americans? According to the Brookings Institution, families earning $25,000 or less will save a grand total of $60 on their 2018 taxes, while those making between $48,600 and $86,199 will save $930. The top one percent of earners, on the other hand, will save $51,140. As for the estate tax boondoggle, it affects about 1,800 super wealthy estates whose heirs will pay no taxes. Not much of a gift to working families.

Legislation Trump is particularly proud of — “to give critically ill patients access to life-saving cures, we passed, very importantly, ‘Right to Try’”— which Congress enthusiastically endorsed, is a cruel hoax that gives false hope to terminally ill patients and brings financial ruin to their families. To read the whole ugly story, check out “Right to Try or Right to Die.”

No Trump SOTU would be complete without a pat on the back to Big Pharma and Israel. “Already, as a result of my administration’s efforts, in 2018 drug prices experienced their single largest decline in 46 years.” You need a new fact-checker, Mr. President. In fact, as investigation after investigation has revealed there were 96 price increases for every price cut in the first seven months of 2018. At the start of last year, drug makers hiked prices on 1,800 medicines by almost ten percent, and many continued to increase prices throughout the year. For a country that spent $338 billion on prescription meds in 2017 only to beat its own record by laying out $360.2 billion in 2018, this alleged drop in drug prices has more to do with the “funny math” of Trump’s Council of Economic Advisors than any real relief for the U.S. consumer.

As per the time-honored tradition of U.S. presidents to genuflect in the direction of Israel, Trump did not disappoint— “my Administration recognized the true capital of Israel — and proudly opened the American embassy in Jerusalem.”

Not one to overlook an opportunity to throw red meat to his base, Trump let loose with the usual scare tactics — “We are alarmed by new calls to adopt socialism in our country…We are born free and we will stay free… America will never be a socialist country.”  Directed at the legislation introduced by congressional progressives to tackle a whole host of democratic reforms particularly the drive for a single payer, government-run health-care system to replace the present one where the majority of Americans confront escalating insurance premiums, ridiculous co-pays and out of sight deductibles. Come to think of it who in their right mind would want to replace a $3.5 trillion-dollar health care system run by billionaires for millionaires— the most expensive healthcare in the world with the poorest outcomes, leaving thirty million uninsured, while remaining the leading cause of bankruptcy and a devourer of 18% of U.S. GDP.

When you get down to it, Trump’s most self-serving lie was the most revealing. “An amazing quality of life for all of our citizens is within reach. We can make our communities safer, our families stronger, our culture richer, our faith deeper, and our middle class bigger and more prosperous than ever before.” One wonders if the 40% of U.S. families who live one paycheck away from poverty, and whose biggest fear is losing their job would give a high-five to their “amazing quality of life.” If they happen to be a Black or Latino family their odds of joining the ranks of the poor are double those of white families. How easily President Trump glossed over the effect of decades (possibly centuries) of economic discrimination and baked-in-the-cake racism that have excluded certain ethnic groups from labor, credit, and financial markets resulting in lower pay, non-existent savings and assets. 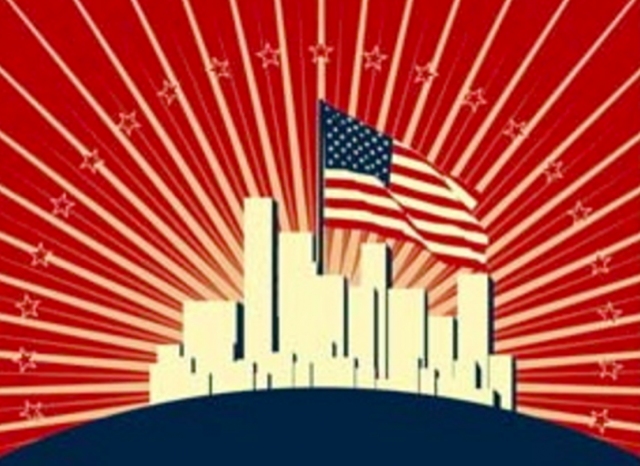 Maybe it was fate that led President Trump to end his SOTU in the time-honored tradition of Presidents Kennedy, Reagan, and Obama by referring to John Winthrop’s charge to the Puritans that their new community would be “as a city upon a hill, the eyes of all people are upon us.” With these stirring words churning in their heads, the Puritans and their descendants went forth and slaughtered upwards of nine million Native Americans. Buying into this mythic delusion, President Trump finished by reimagining Winthrop’s catastrophic prophecy— “We must keep America first in our hearts. We must keep freedom alive in our souls. And we must always keep faith in America’s destiny — that one nation, under God, must be the hope and the promise and the light and the glory among all the nations of the world.”

“The shining city on a hill” doesn’t begin to explain America’s effect on the world particularly since the end of World War II. Perhaps Gallup or Pew pollsters should ask the people of Korea, Vietnam, Grenada, Panama, Iraq, Afghanistan, Iran, Guatemala, Chile, Democratic Republic of the Congo, and Japan how they survived “the hope and the promise and the light and the glory.”  Oh, I forgot, they don’t count.