The U.S. war machine keeps chugging along. With the advent of 24-hour cable news, live stream broadcasting on the internet and social media, the current exploits of the warrior nation are open to the gaze of every inhabitant of the planet. What is less known —U.S. belligerence didn’t start with George W. or Bill Clinton or even Ronald Reagan, the Republican avatar lefties love to hate. No, indeed, the U.S. beef against the rest of the world goes back at least a century (probably a 19th century historian could make a good case for tracing its roots back well into the dawn of that century). Today, SA take you on a round-the-world tour of some of the most nefarious moments of U.S. savagery against the world in the 2oth century. “Listen my children and you shall hear…”

Throughout history the American government has provided its people with an array of enemies (i.e. others) who threaten America’s self-proclaimed, unwavering devotion to peace and justice and the “democratic way” (whatever that is). In 1898, at the dawn of the twentieth century (which Henry Luce, founder of Time magazine, dubbed the American Century in 1941), the US defeated Spain (Spanish-American War) and started its colonial empire by annexing the Philippines. 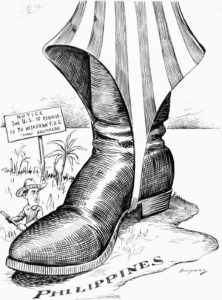 Replacing one colonial ruler (Spain) for another (U.S.) was a non-starter in light of growing nationalist sentiment among many Filipinos. They wanted to be free. That’s when the trouble started.  The US wasn’t big on indigenous nationalist movements. The ensuing war lasted three years until the U.S. overwhelmed the small nationalist army and captured its leader. The toll —4,200 Americans, 20,000 Filipino fighters, and an estimated 200,000 Filipino citizens. Another U.S. foreign policy fiasco.

In 1913, the target was our neighbors to the south, Mexico. Amid growing revolutionary sentiment to end the reign of dictator Porfirio Diaz, U.S. business interests were alarmed.  President Taft (1908-1912) got the hint. In a 1909 meeting with Diaz at the Mexican border, not for the first nor last time, business as usual overwhelmed official U.S. peace and democracy rhetoric — “we have two billions American capital in Mexico that will be greatly endangered if Díaz were to die and his government go to pieces.” Exit Taft enter the 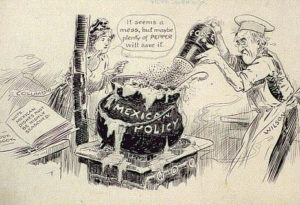 great democratic “peacemaker” who campaigned on the slogan “War in the east, peace in the West. Thank God for Wilson.” He didn’t mention the situation in the south. Good thing, for the U.S. wasn’t having any of that democratic claptrap in its own backyard. After all, “the chief business of the American people is business (thanks President Coolidge), and President Wilson wasn’t about to make a him a liar (in advance of his saying that)—“the revolution was out of control and… only U.S military intervention could stabilize 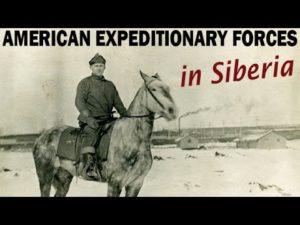 [the state]. Wilson wasn’t through meddling in the domestic affairs of other nations. As the “Great War,” was ending, Wilson and most of the other Western and eastern leaders (Britain, France, Italy, Greece, Czechoslovakia etc.) mounted an ill-conceived invasion of Siberia to overthrow the Communist government of Lenin, Trotsky, and Stalin. After a few hundred U.S. casualties, the war quietly fizzled out, U.S. troops came home, and no significant foreign policy gains or military successes resulted. Sound familiar? 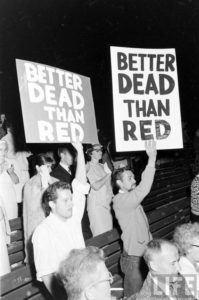 After World War II and the elevation of the U.S.-christened “world-wide Communist conspiracy” to the top of the U.S. hit list, anti-communist hysteria exploded. In 1947, President Truman, still smarting over Republican claims to have found a nest of “Commies” in the administration and determined to prove his Commie-busting bona-fides, issued Executive Order 9835, the first loyalty oath program in America.  Right on schedule, in 1950, a new enemy, North Korea was designated. (see “North Korea in the U.S. Crosshairs”) requiring yet another U.S. war (officially a “police action”), which, it was generally agreed, was essential to keeping the Communists from invading America.  Following on the heels of this debacle was the usual hue and cry over Communists everyone was sure were hiding in plain sight in the federal bureaucracy. As night follows day, the myth of Communist infiltration was followed by the Internal Security Act of 1950 (aka McCarran Internal Security Act.) calling for, among other requirements, the establishment of concentration camps for American citizens deemed security threats. American delusions of internal threats remained remarkably alive and well for 65 years. In 2012, a similar witch hunt occurred based on a similar fear— that internal enemies (currently Russians) were “after our freedoms,” and generated a repeat of the concentration camp follies— section 1021 of the National Defense Authorization Act empowering President Obama (who conceived of the bill, another president from the party of the people) and 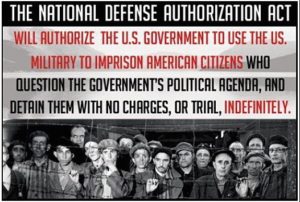 all succeeding presidents (including our present one) to “use… the authority of the Armed Forces to detain covered persons,” including Americans, “without trial until the end of the hostilities” i.e. due process-free military confinement forever. Scratch the surface and all presidents have one thing in common: they consider the Constitution a replaceable part.

Back at the ranch, the US was busy working on a list of evildoers it considered state sponsors of terrorism. The list got a real boost in 1979 when the U.S. house of cards came tumbling down in Iran and brought a crashing, if temporary halt to dreams of Mideast hegemony. Ayatollah Khomeini toppled the Shah, a U.S. puppet, installed after the U.S. engineered a coup against Iran’s democratically elected leader, Mohammad Mosaddegh. Miffed at the demise of “our” autocrat, Iran got a permanent seat on the terrorism list joining Cuba, Libya, Iraq, South Yemen, and Syria. North Korea and Sudan were late arrivals. Today, only North Korea, Sudan, Iran and North Korea remain stuck in U.S. crosshairs.

That wasn’t the end of the U.S. game of “naming and shaming.” George W. bestowed the title axis of evil on Iran, North Korea and Iraq in his 2002 State of the Union speech —  “States like these, and their terrorist allies, constitute an axis of evil, arming to threaten the peace of the world.” Libya is a classic example of how U.S. foreign policy is the step-child of political expediency.  In 1984, Libya joined the list of “deplorables” as a state sponsor of terrorism. Busy trying to rescue two failed wars in Iraq and Afghanistan, in 2006, the Bush administration decided that Libya was “out of the terrorism business” and removed it from the list. Five years later in a bid to shore up his manliness quotient and get Hillary and the other “divas of destruction” Samantha Power and Susan Rice off his back, 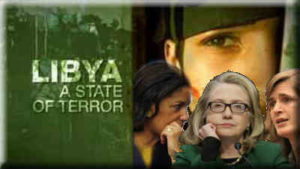 President Obama mounted a devastating air war against Libya. In the tradition of all U.S. leaders of the exceptional nation, he presented his attack as a fait accompli to the UN whose craven behavior never fails to astonish and made short work of Congress by simply ignoring them (not exactly what the Constitution and the War Powers Act had in mind). Needing some cover after his little adventure got out of hand with the murder of Libya’s sovereign leader, Obama trotted out a variant of “R2P” (Responsibility to Protect) — “The use of force is not our first choice. But we cannot stand idly by when a tyrant tells his own people that there will be no mercy.” Needless to say, our finely-honed concern for the masses suffering under tyrants and dictators comes to a crashing halt at the borders of Saudi Arabia, the United Arab Emirates, Bahrain, and various assorted dictators and strong men (“our guys”) in the rest of the Middle East, Asia, and Africa.

America’s war instinct when it comes to “humanitarian intervention,” fits snugly into the definition of insanity attributed to Einstein: doing the same things over and over and expecting different results. The same interventionist policies guide US strategic responses all over the globe and the same chaos and destruction generally result. Time and time again one president after another promises different results. All the while sugarcoating our perpetual war ethos (think humanitarian intervention writ large) with ludicrous defenses (“We had to destroy Ben Tre to save it”—Vietnam), lunacy masquerading as realpolitik (“Hard choice, but we think the price is worth it – Madeleine Albright on the 500,000 Iraqi children who died as a result of US sanctions), and lighthearted banter (“We came, we saw, he died” – Hilary Clinton on the murder of Ghaddafi and the US-inspired transformation of Libya into a “failed state.”) 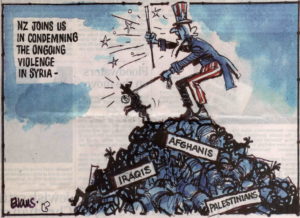 What it all boils down to is that the US is bound up in a spiral of perpetual war.  The militarization of the state has militarized the people.  Unintended consequence? Probably not. When a country’s foreign policy has been reduced to “when in doubt, bomb” as we have seen in Afghanistan, Iraq, Somalia, Yemen, Libya and Syria, the American public, anesthetized by the sheer magnitude of our excesses and desperately clinging to the myth of indispensability, exceptionalism, and superpowerism gets with the program. Hauls out Old Glory, strikes up the band for a stirring rendition of America the Beautiful or The Star-Spangled Banner and soldiers on.  Government officials can sleep better at night knowing they have public opinion on their side. The American empire can keep humming along spending trillions on overseas adventures and defense contractors, spending the minimum on the needs of its people. As long as we keep doing what we have always done, as long as military preparedness replaces diplomacy, as long as America’s growing militarism abroad is matched by a police state at home, as long as the current ”other” is identified as the source of all our problems, as long as America ignores the painful past, eulogizing the past of its own pretending “Whether…deeds were reprehensible or even whether they happened was always decided according to political predilection” (George Orwell), and lets words speak louder than actions “uphold[ing] principles it does not keep, and a morality it does not practise.” 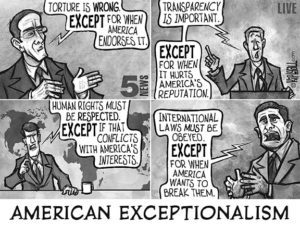 (“American Sniper illustrates the West’s morality blind spots,” Gary Younge The Guardian”), America will find itself staring at the world through the wrong end of the kaleidoscope. It may be too late already.

History is a dangerous thing.  Ignore it and it bites back.