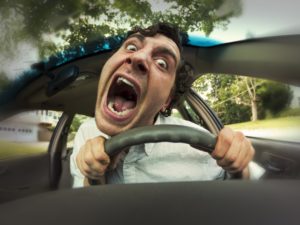 The signs of a country at odds with itself are everywhere. Even the traditional American love affair with the open road has lethal consequences these days. Fatal road rage incidents have increased 10-fold since 2004. Fully 80% of motorists admit they’ve experienced significant rage behind the wheel. Recently a man, angered by the driver of another car, pulled out his gun, killing the other driver instantly. The victim? An 18-year old college-bound young woman driving home after a shopping trip.  Without warning, a senseless confrontation takes two young lives — the victim and her 28-year old murderer. Even our places of work are no longer safe havens. In 2015, 417 people were murdered on the job.

At the same time, U.S. wars grind on killing and displacing millions in numerous countries. When the U.S. is not actually doing the fighting, it assists those who are. A recent example is Saudi Arabia’s war on Yemen. Using US-supplied weapons, aircraft, and intelligence, the Saudi’s have laid waste farms, food facilities, water infrastructure, marketplaces and even ports where most humanitarian aid enters. The toll on the civilian population is staggering: thousands killed, 124,000 sick with war-related cholera, a total that is projected to double every two weeks. Adding to the long list of horrors, 6.8 million Yemenis are close to starvation, 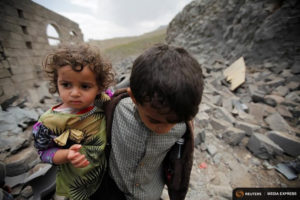 a Yemeni child dies every 10 minutes from hunger and lack of medical care. The U.S. defense of the devastation and death its collaboration has caused — the standard line — the price of bringing peace, stability, and democratic government to beleaguered countries. The U.S. war machine is rocking and rolling with a momentum all its own. Right now, U.S. special forces are revisiting Iraq, a country brought to its knees over a decade ago by the U.S.  Mosul, which was the largest city in Iraq, has been “liberated” at enormous cost — thousands of civilians dead or displaced, the city destroyed, reduced to tons and tons of rubble. Look around Africa and the Mid-East, the price of U.S. “democracy promotion” is total destruction — in Libya, Iraq, Afghanistan, Somalia, Yemen. It’s been a half century since we bungled into Vietnam but the rhetoric remains unchanged “We had to destroy the village [Mosul this time] to save it.” (quote of a U.S. military spokesman on the fate of Ben Tre, South Vietnam)

Violence means big business for American capitalists. American arms makers aside (we all know how rich they and their shareholders are getting from American-inspired violence), another industry squeezing millions of dollars of profits from the U.S. reign of violence is the news media. Cable news records in meticulous detail, on a 24-hour news cycle, the carnage. Where cable news leaves off, studio talking heads fill the gap. Millions witnessed the cringe-worthy performance of Brian Williams, ex-host of the NBC Evening News, rhapsodizing on MSNBC, over the U.S. tomahawk missiles launched on an airfield in Syria: “I am tempted to quote the great Leonard Cohen: ‘I’m guided by the beauty of our weapons.'” 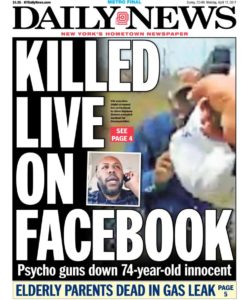 When violence comes home, instead of embedded reporters, cell phone-wielding civilians and surveillance cameras record the mayhem. In Cleveland, an elderly man taking a walk on Easter Sunday was shot and killed. The video his killer shot while murdering him showed live on Facebook. It took Facebook over three hours to decide to take it down. An oversight or good business? By that time, thousands of Americans had watched it and tweeted it all over the world. In Chicago, the third largest city in the U.S., 2016 was the deadliest year in two deadly decades — 762 murders, 3550 shooting incidents, 4,331 victims. 2017 may break the 2016 record. Over the four-day July 4th holiday, more than 100 people were shot, 12 died.

Profiting from violence is not reserved for the media. The whole entertainment industry feeds off it.  Movie companies produce films with gut-wrenching violence and the money rolls in. A sampling of some of the most profitable lines from movie blockbusters underscores the linkage between violence and profits—“Hasta La Vista, Baby” (Terminator 2), “If it bleeds, we can kill it” (Predator – upcoming 2018), “To crush your enemies, see them driven before you, and hear the lamentations of their women” (Conan the Barbarian), “Do you want to know why I used a knife…guns are too quick” (The Dark Night), “Oh yes there will be blood (Saw II).

How skewed are the priorities of a country that spends close to $1 trillion on war, weapons, and armed personnel, while trying to cut $800 billion out of Medicaid—health insurance for the poor and nursing home care for the middle class? As violence becomes a fixture in popular entertainment, as our overseas wars, our war on drugs take their toll on populations all over the world, including our own, up pops a minority of people who feel abandoned, left out, hopeless, part of a loser culture determined to get their “15 minutes of fame.”

It’s not all about our overseas wars. The growing militarization of America’s police force, the economic misery of virtually all but the tiny slice of Americans at the top of the income food chain and the growing divide between the “haves” and the “have-nots” inflame a small but vocal segment of the population.  A leading economist has pointed out that in the period before the 2007 crash, 60% of all income growth went to the 1%. Since 2009, the 1% has been rewarded for crashing the economy by scooping up 95% of income gains. Businesses boost executive pay while workers face cutbacks and layoffs. Corporate moves to lower-wage countries are rewarded with government subsidies. The workforce gets a pink slip. The financial industry —banks, insurance companies, hedge funds, private equity companies, the entire shadow banking industry — make policies that enrich themselves, their wealthy clients and their corporate buddies.  At the same time income inequality between the 1% and the rest of America skyrockets. Five 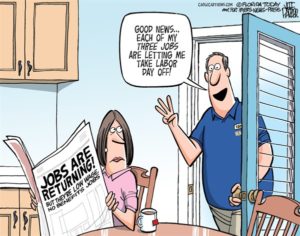 billionaires control most of the economy, the media, politicians, and most government departments while 44 million young people face a life of debt peonage, the U.S. healthcare system rewards its executive while delivering mediocre outcomes for the rest of us, and the job growth we are told is heading to full employment consists of unsustainable part-time, contingent jobs with no benefits. (95% of all jobs created since 2008 are part-time. See the report here).

To heighten our sense of anxiety, the government propaganda machine regularly issues anonymous reports of impending terrorist attacks. While the administration and the congress are busy looking for mythical threats to our “free and fair” elections, they ignore the actual one —the growing threat of home-grown violence. In 2016, the murder rate in 30 largest cities rose 14% over 2015.

Is there an excuse for violence? NO! Is there a reason for it? Unfortunately, YES, a ton of them. 70% of Americans have less than $1,000 in savings. 55% of seniors have less than $10,000 saved for their “golden” years and homeowners face the grim reality that their home is probably worth less than 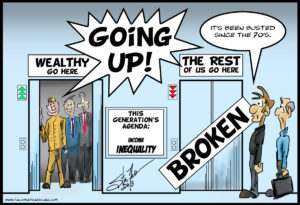 it cost. The average American looks over the fence at the gated communities where the 1% live in solitary splendor. Their wealth and power allow them to dodge taxes, take advantage of generous tax subsidies, drive down the wages of their workers, move their plants to lower-wage countries and own a politician or two or three. If that isn’t enough to send most Americans into paroxysms of helpless rage, a new report by the non-profit charity, Oxfam found that 8 men, 6 of them Americans, own more wealth than 3.6 billion people, 50% of the world’s population.

Is there any way to even up the odds? As the Oxfam report suggests, one staring point is “a fundamental change in the way we manage our economies so that they work for all people and not just a fortunate few.”  The best way to make that happen in a democratic republic is to elect candidates who will transform the world and vote out the people who won’t. When it comes to voting, a huge challenge awaits. America has the lowest voter turnout of any major country on earth. 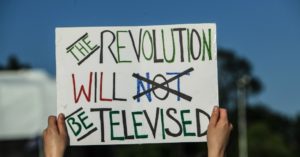 Most don’t vote because they don’t believe their vote will improve their lives. Voting for the same old politicians who make the same old promises when they’re running and forget them when they win is like treading water. Instead of giving up, remember all politics is local. Start where you live. Dump the local bought-and-paid for Republican and Democratic mayors, town councils, members of the School Board, the Library Board, the Planning and Zoning Commission —and replace them with progressives, force out do-nothing state legislators and Governors and replace them with candidates with a laser focus on delivering for the 99%. Similarly, support candidates for national office who will follow through on campaign promises —good jobs, universal healthcare, peaceful co-existence with the rest of the world, an end to perpetual war, an economic revolution for the 99%. “When you stand for something, people will respond” (Bernie Sanders, speaking at the People’s Summit in Chicago, June, 2017).

In the words of a remarkable progressive whom we lost way too soon— “Let’s not speak any more about capitalism, socialism.  Let’s just speak of using the incredible wealth of the earth for human beings.  Give people what they need: food, medicine, clean air, pure water, trees and grass, pleasant homes…, some hours of work, more hours of leisure.  Don’t ask who deserves it.  Every human being deserves it.”  [Marx in Soho: A Play on History (1999) Howard Zinn]