Police shoot woman who called 911 to report a suspected sexual assault outside her home. Another addition to the rapidly mounting toll of victims of police brutality. Whatever happened to “serve and protect?” To try and make sense of the bedlam on America’s streets, we are reprinting “The War Comes Home: Violence and Death on America’s Streets. 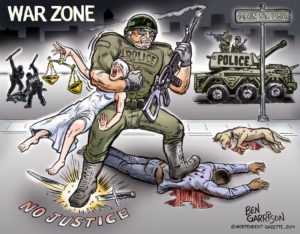 Police killings of black young men are becoming a staple of daily life in America. Despite cell phone videos that reveal in shocking detail the culpability of the officers involved, time and time again local juries absolve the police. Grieving relatives are left to vent their sorrow, rage and frustration.

“That was my brother, that was my mentor, that was my father figure. That man worked hard every single day, every birthday, every Christmas. He was the one that made sure I had gifts. He didn’t deserve to die the way he did. And I will never have faith in this system.” —Sister of Philando Castile after the jury acquitted the policeman who shot him. 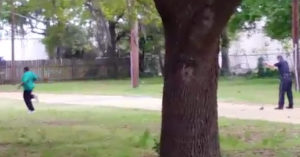 Young men being targeted by law enforcement. Civilian juries choosing not to believe the evidence before their eyes. What’s going on? Have we surrendered our humanity on the altar of safety? Is it now the law of the jungle —kill or be killed? Has the state of perpetual war the U.S. foments overseas finally come home?  Look around and despair. Every city or town regardless of size is loaded to the gills with battlefield armaments courtesy of the U.S. Defense Department. In 38 States, police have obtained surplus firearms silencers which have no place in domestic law enforcement, being used mostly for covert assassinations. When it comes to heavy-duty equipment, no self-respecting town would be caught dead without at least one armored personnel carrier (MWRAP) and a couple of rocket launchers. 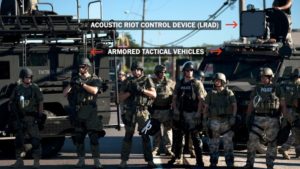 The military build-up goes on in cities and towns across America. Local SWAT teams were used about 3,000 times in 1980, before reaching stratospheric heights of 50,000 times in 2015. “Baltimore and Dallas have used them to break up poker games. In 2010, New Haven Connecticut, sent a SWAT team to a bar suspected of serving under-age drinkers.” (“Cops or Soldiers?” The Economist, 3/22/2014). A new feature of this militarized law enforcement  is the rise of the aggressive use of civil asset forfeiture laws which deprive citizens of their property without any legal proceedings or evidence gathering required. According to the Washington Post, police have seized $2.5 billion from citizens since 2001. Often, banana-country style, corrupt law enforcement agencies conduct armed shake-downs of innocent motorists and pocket the loot.

A global operation for managing protests on a national basis comes out of fusion centers, the brainchild of the Bush administration upgraded by Obama. Bands of local, state, and federal law enforcement agencies attempt to identify potential terrorist threats (getting it wrong most of the time instead targeting granny and her sisters in a non-violent protest) without regard to such old-fashioned requirements as proof or warrants. According to a Senate investigation: “the fusion centers often produced irrelevant, useless or inappropriate intelligence reporting to DHS [Department of Homeland Security], and many produced no intelligence reporting whatsoever.” 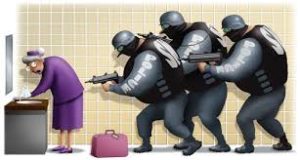 Not surprisingly, the report noted, the fusions centers could claim one “accomplishment “—on several occasions violating the civil liberties and privacy rights of innocent citizens.

The end game for a country whose leaders view the world through the prism of military solutions, endless war and proliferating military bases is the extension of that mindset to domestic problems using the same techniques with the same results— more violence, more no-holds-barred-zero tolerance policies, more blowback. The warrior whoops when the military announces a “kill” or the media celebrations when the U.S. launches an air strike (usually killing innocent civilians on the ground), the stunning profits of the weapons makers have made us violence junkies. Our world view has shifted —from a peace-loving nation to a virtual police state. [Check out “A Tale of Two Brothers” to find out what a peaceful America might look like] We are fed the usual propaganda — America the exceptional nation, the indispensable nation, the sole superpower. Shouts of USA, USA greet reports of “enemy” deaths, heads turn away from news of another country ravished by our bombs, of children incinerated by our drones. Military chiefs proudly announce another victory (usually short-lived) in the war against the enemy du jour.  Approving head shakes. 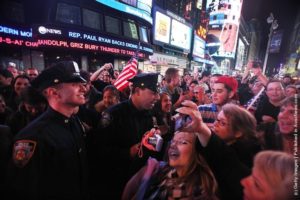 In 2011, Obama interrupted scheduled programming on all the television networks and cable to announce proudly that American Special Forces had killed Osama Bin Laden. Towards the end of his speech, he made a curious  observation “We will be true to the values that make us who we are.”  Which values? The one that sent thousands of Americans into the streets fists raised chanting “USA, USA,” or the American predilection for “an eye for an eye” retributive justice that in today’s overheated environment becomes an excuse for killing and destroying all over the globe. Brought back home, these values that “make us who we are” put young black men and women in the cross hairs of police assaults. 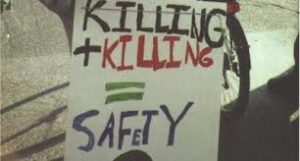 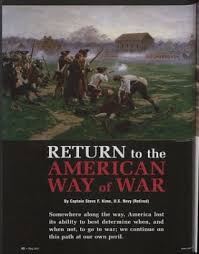 Even calls to “support our troops” normalize what was once rare: the commanding presence of the military in domestic law enforcement, blurring the line between civilian and military domains. With our admittedly short attention span, Americans no longer find it unusual or uncomfortable to be greeted by armed military personnel when they go to local, state, or federal offices, accept without protest  guards pawing through their belongings and X-ray searches of their bodies. For those few who still ask Why, the answer is always the same — to keep us safe. When that excuse starts to wear out its welcome, official (anonymous) sources hint of plots and conspiracies afoot requiring ever more repression. The actual plots are of course classified for, you guessed it, national security reasons. The representatives and senators we send to Washington are in on the national security dodge. Closed sessions and secret deliberations do the job — heighten our fear, exacerbate our sense of peril, making us that much more willing to exchange our liberty for (we are told) security.

When the politicians are not busy keeping us safe, they are reassuring us that “America can do whatever we set our mind to” [Barack Obama]. It’s getting more and more difficult to do that in a society where inequality is rampant. Most politicians wax eloquently about combatting inequality — before they are elected.  The conversation shifts to that old bugaboo national security when they get to Washington.

Maybe we should start by demanding that our leaders pay more attention to the income divide than the Patriot Act. Instead of reassuring us that full employment is around the corner, let’s find out what kind of jobs our profit-driven, free market economy is actually producing. The jobs that count are full time, good-paying jobs with benefits. Not the 11 million “fake” jobs that Obama considers his legacy always “forgetting” to mention that 95% of them are contingent —temporary, benefit-free, part-time. While we’re at it how about tax reforms that distribute the tax burden more fairly and force the wealthy to pay their fair share. The right kind of tax reform (not the Trump plan to further enrich the wealthy) would make a large dent in inequality. Let’s put back on the table, a cost-effective universal health-care system that distributes life-saving care and drugs to everyone who needs them.

Common sense reforms, like the ones above, are on life support in Congress. Forget the Executive branch. They’re too busy running for cover. The real Washington consensus uses fear to scare the population into submission. A little persuasion goes a long way. Enact policies that abridge civil liberties and convince people it’s the only way to keep them safe, hail the police as the force standing between us and mayhem, pass laws that may one day send protestors to military prisons indefinitely and make sure the state-controlled media doesn’t publicize them. [See “America’s Biggest Export: Perpetual War” for more about the repressive laws already on the books] Time passes, memories are short, people begin to get with the program, to believe that repression and curtailment of liberties are the only way America can survive.

Even the American judicial system feels the weight of our terrible fear, of our willingness to trade civil liberties for the promise of security. 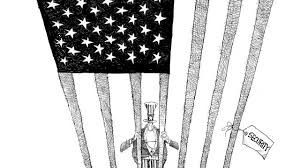 When the police take on the persona of saviors, when justice is pitted against the peril we imagine is all around us, authoritarianism wins out and becomes “who we are.” In such an environment, all curbs and restraints fall by the wayside,

To sacrifice our liberty for “security” is a Faustian bargain that has already cost us many of the freedoms we consider our birthright, the protections embodied in the Constitution and the last remnants of the American dream. Goethe said it best — “None are more hopelessly enslaved than those who falsely believe they are free.”