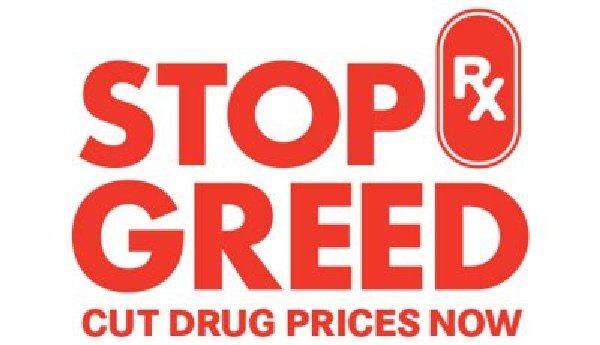 Sounds pretty authoritative. A directive from the CDC? The result of exhaustive research and around-the-clock testing? A call to action demanding immediate public compliance?

Actually, no. It turns out that Albert Bourla, CEO of Pfizer, one of three companies producing the COVID vaccine, has a master plan for keeping his vaccination business going at full tilt far into the future.

A decision that should come from public health officials was instead hijacked by the CEO of a company in the most criminogenic industry in this country — Big Pharma. As to Mr. Bourla’s credentials. Is he an M.D. with decades of experience in public health? Actually, no. To be clear, he does have medical experience — as a veterinarian. With the concurrence of media stenographers, his announcement was treated as an irrefutable scientific finding. One dissenter, The New York Times, in a departure from its SOP of mindlessly repeating government and industry talking points, had to admit that Pfizer’s opinion of the need for future boosters and additional vaccinations was just that, an opinion, unsupported by independent scientists or for that matter U.S. public health officials.

His motive for such an audacious announcement is the usual one — profit. That only 1 in 500 people in low-income countries has been vaccinated compared to 1 in 4 in rich nations [World Health Organization] doesn’t move the Pfizer conscience meter. What does move the needle is the impact of COVID vaccines on Pfizer’s bottom line. Analysts initially pegged Pfizer’s 2021 revenue from the COVID vaccine at $6 billion with substantial reductions in succeeding years —$2.08 billion projected for 2022 diminishing to $1.08 billion by 2025. That was bad news for vaccine makers who were counting on the music to keep playing. Yearly vaccines and the necessity for booster shots solved the problem. After Bourla claimed that boosters and annual vaccinations were in every American’s future, business began looking up. Couple that with the spectacle of wealthy countries (including the U.S.) buying two and three time more vaccines than their entire populations, and suddenly $6 billion in revenue this year morphed into $15 billion making the COVID vaccine the second-highest revenue-generating drug anytime, anywhere. [Quartz, 2/2/21]. BioNTech, Pfizer’s partner in crime, joined the party with projected revenues of $11 billion. Add into the mix, another $7 billion that Johnson and Johnson is forecasting and what you have is instant billionaires not vaccinations for billions — BioNTech founder Ugur Sahin is now worth $5.9 billion and Moderna CEO Stephane Bancel is worth $5.2 billion. [Peoples’ Vaccine Alliance]

The more they get, the more they want.  Pfizer has already announced that post pandemic annual COVID vaccinations are going to have a hefty price tag. Here’s Pfizer’s Chief Financial Officer Frank D’Amelio delivering the good news to shareholders — “obviously,” the company is “going to get more on price” after the “pandemic pricing.” Even their “pandemic pricing model” is not a charitable undertaking having a built-in profit margin of between 60-80%, [“Pfizer, BioNTech’s U.S. supply deal price tag leaves room for ‘decent’ profit on COVID-19 vaccine: analyst,” Fierce Pharma, 7/23/20].

The corporate bag man orchestrating the vaccine windfall, Albert Bourla, would win the Oscar if there were one for the greediest CEO in pharma-land. After becoming Pfizer’s CEO in 2019, he surpassed the board’s target of $51.7 billion in revenues by delivering $52.4 billion. For that dubious achievement, he was rewarded with a pay increase of 82%. By 2020, Pfizer was the eighth wealthiest drug company in the world, its drug prices steadily rising along with its stock price. Bourla was taking home $21 million.

All wasn’t coming up roses, however. Ken Frazier the outgoing CEO of Merck was the first to spot the ants at the picnic— the drug companies pitiful approval rating was hovering around 32% — “the pharma industry must take on the challenge of its poor public perception.”

And so they did. 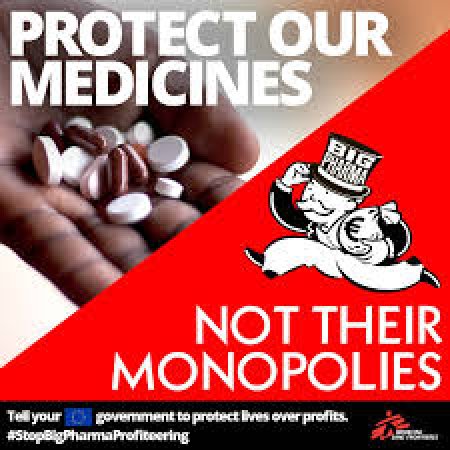 Was it by lowering overpriced drugs? Or by agreeing to the relaxation of monopoly barriers so that poor countries, presently shut out of vaccine procurement, could use the Pfizer or Moderna formula and produce vaccines for their people at an affordable price? Did they finally agree to go along with proposed federal regulation of drug prices?

What they did was to start a campaign of inspirational pandering, commonly known as spin. Behold Sanofi, global powerhouse (ninth richest drug company in the world) promising to get its drugs to more people in lower income countries (it doesn’t say how), to fund local support efforts (money for this effort unspecified), and finally two promises that would be laughable if they weren’t so pathetic, to make its company cars carbon-neutral by 2030 and remove blister packing from its drugs by 2027.

While all this rosy cheer was heating up the airwaves, greasing the palms of investors was on the fast track. “…Big Pharma [was] making huge payouts to wealthy shareholders in the face of this global health emergency.” [Anna Marriott, Oxfam International]. The three major vaccine producers — Pfizer, Johnson & Johnson, and Astra-Zeneca handed out $26 billion in dividends and stock buybacks. You know what they could have done with $26 billion? Vaccinated the entire 1.3 billion population in Africa. Right now, according to the World Health Organization [WHO] less than 2% of COVID vaccine doses have gone to people in Africa, the world’s second-most populous continent. 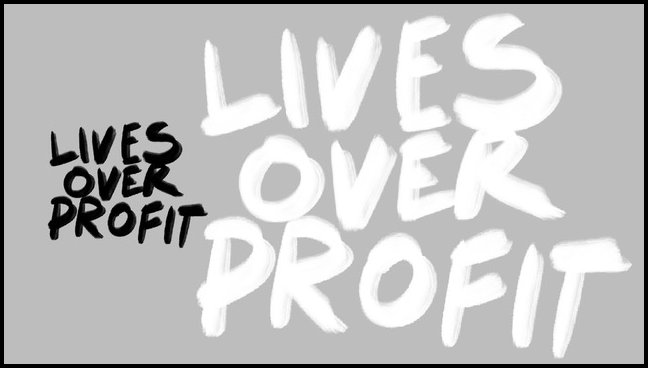 But that wasn’t in Pharma’s business plan. Instead promises were all the rage as U.S. bought and paid for politicians faced growing public outrage particularly as the FDA approved a new drug costing $2.1 million (single dose). Protecting outsized profits became the name of the game as Pharma launched a charm offensive. Environmental “solutions” a decade or longer away were particularly popular in drug company fairy tales. Novartis (third highest revenue-producing drug company in the world and maker of the $2.1 million drug)) vowed to become carbon neutral in the next decade. A promise it’s bound to break once public demands for government regulation of drug prices have subsided. Bristol Myers Squib with global revenues of $42.52 billion (seventh most profitable) pledged a measly $300 million (less than 1% of its yearly haul) to increase diversity and improve healthcare access. Not surprisingly the simplest solution to increasing diversity, lowering the outlandish price of life-saving medications, starting with insulin for diabetes that disproportionately affects people of color, didn’t make the cut.

The list of drug companies racing to put out press releases testifying to their undying devotion to environmental, corporate and social good deeds reads like a most-wanted list including some of the biggest corporate drug criminals like GlaxoSmithKline, Roche, Biogen and Johnson and Johnson.

What is the effect of patently empty promises and rhetorical hot air on the approval rating of drug companies? This will surprise you. Prior to its campaign, in January 2020 the pharmaceutical industry was at the bottom of the heap, beating out the IRS, tobacco companies and Comcast for lowest approval ratings. [Harris Poll] This January, in an abrupt reversal, 62% of the public had a positive opinion of pharmaceutical companies.

As the pharma marketing squad was touting its new-found social consciousness and the public was swallowing the blather about vaccine production being the selfless act of a humanitarian industry, the business side was quietly raising prices. In January 2021, drug makers increased prices for 832 drugs. More price hikes by drug makers in less than half a month (813) this year than the 737 raised last year in all of January. Pharma acted quickly to change the conversation. The powerful drug company lobbying group PhRMA put out a press release with the inspirational message that [it’s hoping for] “an opportunity to work with policymakers on smart, patient-centered solutions that lower the cost of prescription drugs and protect the ability to continue developing new cures and treatments.”

That’s pharma’s business-as-usual dodge when serious attempts to pass lower drug price plans rear their ugly heads. According to Pharma, price increases are necessary “to support investments that allow us to continue to discover new medicines and deliver those breakthroughs to the patients who need them,” [Amy Rose, Pfizer spokeswoman] Even though that assertion has been debunked by none other than the House of Representative Financial Services Committee —“…as prices have skyrocketed over the last few decades… these same [drug] companies’ have dedicated more and more of their funds to enrich shareholders or to purchase other companies to eliminate competition.” [January,2021] Need more proof? The Campaign for Sustainable Drug Pricing and Global Data (CSRxP) study found more than 19 cents of every Big Pharma dollar goes to marketing and advertising — a whopping $47 billion at just the top 10 U.S.-based drug makers.

As long as we let drug companies control the message, Americans will face two pitfalls. Annual expensive vaccines that may or may not be necessary and rising prices for life-saving drugs. All in the interest of soaping the runway for the greedy executives and ahareholders of drug companies.

What do we have to show for it besides two new billionaire CEOs, $33.5 billion enriching the coffers of Pfizer/BioNTech and Moderna, and $19 billion handed over to wealthy shareholders? Who will press the pause button?