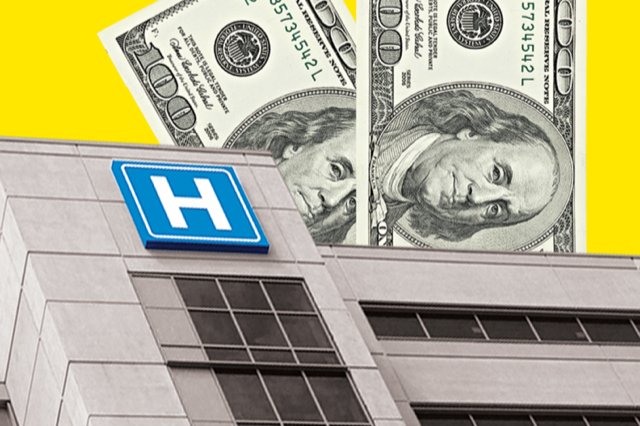 Is there a sentient being on the planet who believes that “good-faith” discussions with drug companies are the key to avoiding excessive pricing and ensuring affordability and access to COVID vaccines? Particularly in light of the revelation that Pfizer’s humanitarian whining cannot hide its intention of continuing to carry out its pillage and plunder business plan.

A couple of weeks ago, Pfizer Chief Financial Officer Frank D’Amelio on an ‘earnings call’ to fat cat investors was full of upbeat news on the profit scene —“obviously” Pfizer is “going to get more on price” after the “pandemic pricing model” [Fierce Pharma, 2/23/21. Translation — No more Mr. Nice Guy, it’s time to resume fleecing the public openly instead of covertly raiding the government purse.

What a haul the vaccine makers grabbed out of the U.S. treasury (aka tax payerd’dollars). Add in a little price gouging with the U.S. paying more per dose (60¢) than other developed nations. For the first order of 200 million doses, the U.S. paid an extra $120 million. Price gouging becomes a fine art in the hands of the pharmaceutical industry.

Next order of business for the geniuses at the drug companies was turning a once-in-a-lifetime vaccine into a blockbuster profit machine churning out profits year after year. Not quite as challenging as turning water into wine, but nonetheless a head scratcher. The final answer?  Create more demand “It is increasingly likely that an annual vaccination is going to take place for the foreseeable future.” [Pfizer CFO D’Amelio]  You can bet it won’t be at “pandemic” level prices. If history is any guide, the sky’s the limit. Pfizer pneumonia vaccine, Prevnar, is a blockbuster that brings in $5.8 billion in yearly revenue. Cost per dose? $211.86. 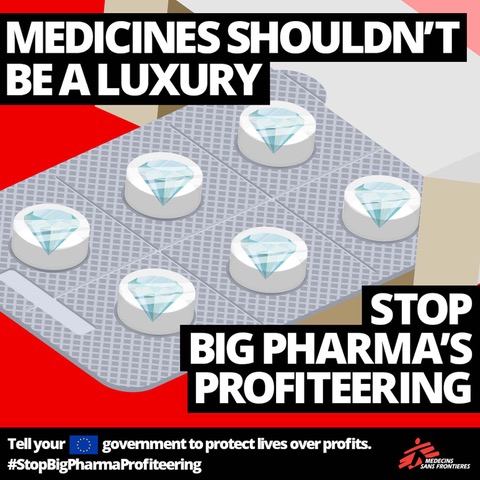 Vaccines are obviously the gold standard for tackling the pandemic. That’s not the whole answer. Take the U.S. with only 5% of the world’s population and a yearly healthcare costs approaching $4 trillion. It boggles the mind that this is the same country with the highest total of both cases and deaths in the world. To find the reason look no further than an unregulated for-profit healthcare system with drug companies leading the pack. Big Pharma’s ‘generous’ support of elected officials in Congress and the White House guarantees that no structural changes in healthcare delivery like a national healthcare system will ever become law. “Our elected leaders must… prioritize the health and well-being of people over Big Pharma’s profits… [instead they] are choosing to allow a few Big Pharma companies to maintain their monopoly control over these drugs [vaccines] in order to maximize their profits.” [Margarida Jorge, Lower Drug Prices Now]

A group of Nobel prize-winning economists chimed in — “In the specific case of COVID-19, Pharma companies have received massive support from governments… in the U.S. alone, the six major vaccine companies have received over $12 billion in public support… It is likely that the three ‘leader’ vaccines have already received what could be considered as reasonable returns on their own investment and more.” [“Nobel Economists: Suspend Vaccine Patents to Halt Pandemic,” Common Dreams, 3/12/21]

Who could disagree with contention that it’s time to rein in the drug companies for the sake of the health and well-being of the American people? There’s one. The director of NIAID (National Institute of Allergy and Infectious Diseases), considered by many in the media “America’s Doctor” has a contrary view. Here he is at the annual meeting of one of Pharma’s prime mouth pieces, the lobbying and trade group BIO (Biotechnology Innovation Organization) ‘warning’ against regulating Big Pharma —

That same phony defense of bad behavior is a favorite trope of the drug companies and their paid shills. PhRMA (Pharmaceutical Researchers and Manufacturers of America) reacts in a similar fashion when legislation to rein in excessive drug prices is introduced (not in congress, richly endowed by Pharma to keep lawmakers obedient but in state legislatures)— “The outcomes of these policies [allowing Medicare to negotiate drug prices] would only make it harder for people to get the medicines they need and would threaten the crucial innovation necessary to get us out of a global pandemic.”

Dr. Fauci’s cozy relationship with the titans of the drug industry was visible as far back as 2017 as the Zika virus was on the brink of turning into a global pandemic, Sanofi, a leading vaccine maker, with revenues of $40.08 billion in 2020, (the ninth most profitable drug company in the world) had already stashed away $43 million in federal funds for the development of a Zika vaccine. Incredibly it flatly rejected the U.S. army’s request for a “fair” price. Soon after, Sanofi determined that a Zika vaccine would never achieve blockbuster status and moved on to more profitable enterprises.

Did Dr. Fauci publicly challenge Sanofi? Not exactly. He chalked it up to ‘business as usual.’ “We don’t really have the mechanisms to influence pricing of a product, even products we make a major investment in.”

If you have a bridge to sell, Dr. Fauci is your man. 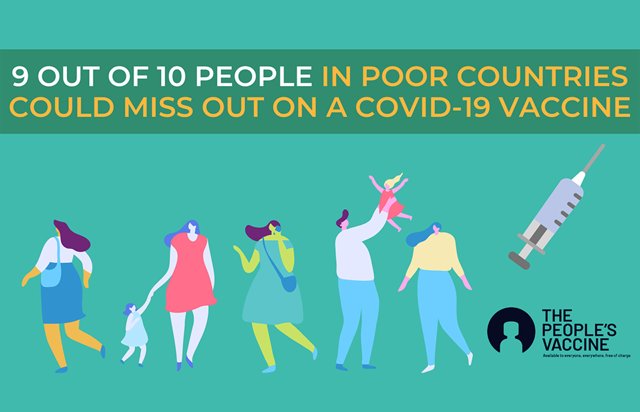 With vaccine makers already wash in billions, Johnson & Johnson in first place with $82.6 billion in 2020 revenues (Fierce Pharma, 3/29/2021), wouldn’t you think these companies would step up to the plate and voluntarily relax trade barriers to make the vaccine available in poor countries that cannot afford even “pandemic pricing?” Hell no. Instead, acting through their lobbies, PhRMA and BIO, they are demanding that the U.S. Justice Department “pursue a variety of enforcement initiatives [including] all available tools and leverage to ensure America’s trading partners” do not suspend intellectual property rights and continue to deprive low-income countries of the opportunity to vaccinate their people. Is this what a “good faith” effort on the part of the drug companies looks like?

Even for the pharmaceutical industry this is a new low. Particularly since the richest nations in the world with only 16% of the total population have already bought up or contracted for one-half of the present and future supply of the vaccines. “A catastrophic moral failure” [The World Health Organization]

Without doubt, the blame falls on all the world’s richest nations. But for the exceptional nation, the U.S., that considers itself the moral heart of the universe a special place in hell is reserved. Past and present U.S. administrations, Republican or Democratic, have continued to support the greed of the drug companies. That’s what over $200 million annually in campaign cash from buys. Even worse, the patent system, Pharma is whining about protecting was built with taxpayer [public] money. “so the patent system is, you risk private capital, you can get a monopoly in exchange as a reward…Except…for pharmaceutical companies, it’s not private capital, it’s actually public actors.” [Achal Prabhala, Access IBSA project which advocates for global access to medicine]

From Dr. Fauci’s shrug at the idea of regulating drug prices to the U.S. government’s complicity in a scheme to deprive 84% of the world’s population access to life-saving vaccines, to two major studies that showed how pathetically unprepared the U.S. was and is to meet the challenges of a national epidemic, the arc of justice or humanity does not point in the direction of the U.S. According to a study released by FamiliesUSA,  40% of U.S. Covid-19 infections and 33% of deaths were among uninsured Americans, Because the U.S. steadfastly refuses to adopt national health insurance, American lives have been devastated by the pandemic —  “The reality is that our for-profit healthcare system puts the U.S. at a dangerous disadvantage and … has also meant millions of Americans have contracted Covid-19 unnecessarily and hundreds of thousands of deaths could have been prevented.” [“Unprepared for COVID 19: How the Pandemic Makes the Case for Medicare for All,” Public Citizen, 3/16/2021] 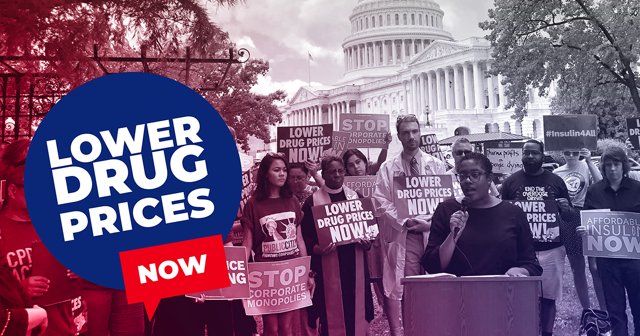 Whether it’s the ravages caused by a pandemic or the many thousands of American deaths lost every year by lack of health insurance, the bottom line is always the same. Congress must stop rewarding the healthcare industry (with the drug industry the leading profit maker) and give the American people what every other developed nation has had for decades — Medicare for all. Providing healthcare from the cradle to the grave saves lives and as a bonus a ton of money. Congress’ research arm, the CBO (Congressional Budget Office) estimates that a national healthcare system would save $650 billion in healthcare expenses annually, cover all Americans without deductibles, copays or narrow insurance networks that limit freedom of choice and often become barriers to care.

What in the world are we waiting for?