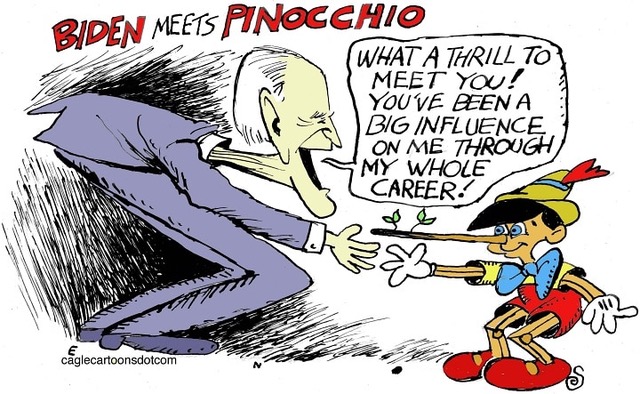 In their latest bid to outflank opponents by moving backwards, a passel of center-right Democrats who control the party have chosen Joe Biden to be the party’s standard bearer. Echoes of the disastrous Hillary Clinton campaign are getting louder.  Like Hillary but even more openly, Biden makes no secret of his devotion to his wealthy donors. He’s been carrying water for them his entire career, even whitewashing their contribution to income inequality. In 2018, he reassured his billionaire audience— “I don’t think 500 billionaires are the reason why we’re in trouble.”  In 2019 Biden was singing the same tune in a different key —“Rich people are just as patriotic as poor people.”

Having absolved the empire’s oligarchs and plutocrats of any role in rampaging income inequality, Biden probably wasn’t surprised that in May and June he was rewarded with over $11.5 million in campaign contributions —mostly from Wall Street.  Their attempts to paint themselves as patriotic Americans might have been funny if it weren’t so pathetic —“I’ve seen meaningful numbers of people [billionaires] put aside what would appear to be their short-term economic interest because they value being citizens in a democracy.”  Figures that a hedge fund phony and big time Biden contributor ($3 million and counting), would uncork that whopper. Along with his other crimes, the billionaire in question Seth Klarman is among the soulless U.S. billionaires who cash in on human misery and suffering to enrich themselves and their BFFs. This time to the tune of $3 billion betting on insurance claims in the California wildfires. Response from the Biden campaign? Silence.

Joe’s love affair with plutocrats in the finance industry is another best kept secret among the “people who matter.” They have rewarded his fealty with contributions of $44 million to keep the music playing. The big cheese, Trump, has only managed a meager $9 million.

When it came to kissing the new boss’s ring, Elizabeth Warren put on an unparalleled performance at the Democratic convention. The official Senate scold of oligarchs and their crimes against non-oligarchs, Warren ditched her convictions for the possibility of a cushy job in a Biden administration — “Joe’s plan to ‘build back better’ includes making the wealthy pay their fair share, holding corporations accountable, repairing racial inequities and fighting corruption in Washington.” The only trouble is that Joe has never mentioned a wealth tax in his economic plan. On the contrary, he has explicitly promised his Wall Street donors no new legislation to change corporate behavior. (TMI,” Team Biden Now Signals Austerity Despite Campaign Pledge”)

Joe’s proclivity to make promises he has no intention of keeping, like his campaign pledge to spend $3.5 trillion “to invest in clean energy and caregiving, buy more made-in-America goods, and start narrowing the country’s racial wealth gaps.”  Not surprisingly the campaign sent out old faithful Biden crony, Ted Kaufman, to set the record straight “When we get in, the cupboard is going to be bare…So we’re going to be limited.” What he really means is another round of austerity, including major cuts in social programs. But don’t take it from me, here’s what economist Dean Baker read into his remarks — “The idea that we would not address pressing needs, like climate change, child care, and health care because we are concerned about the debt burden is close to crazy…” 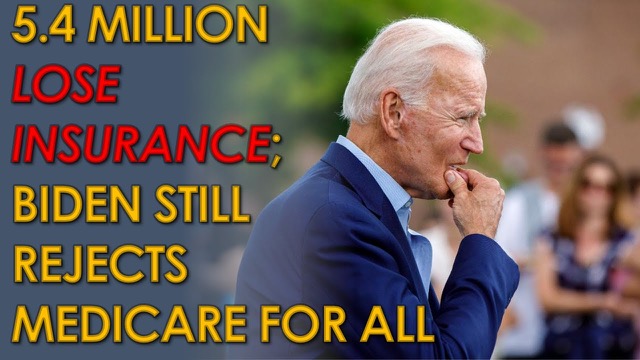 Sometimes Joe doesn’t even bother to make a promise he won’t keep. Take Medicare for All, a single payer national health care system that 87% of Democrats and the rest of the developed world support. Here’s what he said when asked by Lawrence O’Donnell if he would veto a Medicare for All bill that might come to his desk— “I would veto anything that delays providing the security and the certainty of health care being available now,” Translation: no way, now how, I’m going to go against my big buds in the healthcare industry.

True to his word, Biden’s campaign staff made sure no mention of Medicare for All appeared in the platform or anywhere else. Predictably, a number of delegates were outraged — “At the Democratic National Convention this week, 1,069 DNC Delegates voted to reject a Democratic Party platform that excluded Medicare For All. During a pandemic, as millions of people lost their jobs and their healthcare at the same time, our private, for-profit insurance system failed to meet the needs of patients, front-line healthcare workers and the people of this country…” (Judith Witmer, Chair Nevada Delegation to the Democratic Convention)

The Green New Deal which also got short shrift at the convention was another sticking point. With an 86% approval rating from Democratic voters, its omission from the platform raised a lot of eyebrows. Even the Democrats’ much-touted promise to end fossil fuel subsidies that had originally been part of the platform was MIA in the final document. Coincidentally by the time of the convention, Biden had already raised $400,000 from the fossil fuel industry. Power to the people goes out the window when much-needed campaign funds are on the line, as evidenced by Biden’s promise not to support a nationwide ban on fracking.

Progressives wept anew when nuclear energy about as clean as ‘clean coal’ also got a thumbs-up from the Biden-endorsed platform for the first time since 1972. In fact, Biden had always been a cheerleader for the owners and investors of nuclear power plants. Over 300 environmental groups including Sierra Club, Greenpeace, and Public Citizen were unsparing in their criticism— “We flatly reject the argument that increased investment in nuclear energy is an acceptable or necessary solution. Nuclear power should not be a part of any solution to address global warming.”

If you need any further proof of how much the voice of the people means to this new breed of Democratic powerbrokers, stay tuned. Shortly after the convention, word leaked of a memo sent by 275 concerned delegates describing Biden’s stable of foreign policy advisors, on the short list for top posts in a Biden administration, as a “horror show” sure to recommend “disastrous” military interventions in the Middle East.

After the memo was made public, a Biden flunky put the kibosh on that nascent revolt — [these advisors are] “the smartest, most principled people…I would trust no one to more honestly … guide American foreign policy. Should they have a chance to serve, we will all be better off.” On that point, — Yasmine Taeb, senior policy counsel at Demand Progress disagreed. “Progressives want to see a strong commitment on advancing a more principled foreign policy that prioritizes diplomacy and multilateralism but also…that those advising Vice President Biden have a… record of opposing regime-change interventions, rejecting the whitewashing of torture, and opposing armed authoritarian governments…” Biden’s advisors check none of those boxes.

Despite belly aching from Progressives, one thing is crystal clear —in a Biden administration, war will continue to dictate foreign policy. Consider who Joe selected to toot his foreign policy horn —an inveterate liar and war criminal, former Bush ’43 Secretary of State, Colin Powell. As a featured speaker at the Democratic convention (his presence lending further credence to the notion that Rs and Ds are one big happy family), he proudly explained — “…[Joe Bilen] will stand with our friends and stand up to our adversaries…He will restore America’s leadership in the world and restore the alliances we need to address the dangers that threaten our nation…” Translation —business as usual for the Pentagon and defense industry. 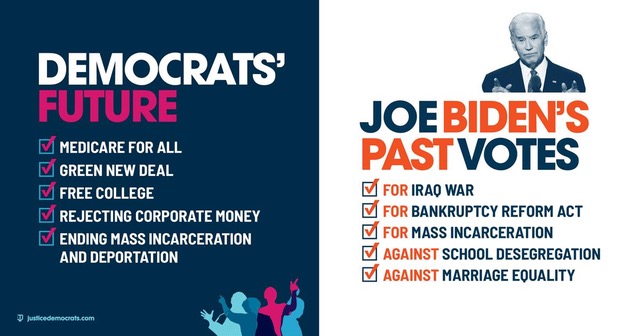 Presidents come and go, Democrat or Republican, but change is never on the table. Joe’s history of voting for the empire and against the people promises more of the same. Votes like supporting the Hyde Amendment prohibiting abortion coverage in federal insurance plans, writing and pushing through Congress two bills that changed the lives and futures of millions of people of color and students: the 1994 crime bill and the 2005 bankruptcy bill, voting to deregulate Wall Street (leading to the financial crash of 2008), removing all mention of Israel’s occupation of Palestine from the platform are a medley of Joe Biden’s greatest hits. With baggage like that, it stands to reason that he would call upon another Republican heavy weight, the anti-abortion, anti-union, law and order John Kasich— “I know Joe Biden is …someone who understands the hopes and dreams of the common man and the common woman, a man who can help us see the humanity in each other. Translation — humanity aside, those social programs are killing us. they’ve got to go.

In the realm of foreign policy his missteps verging on criminality are legion from supporting the war on drugs starting in 1971, the war in Yugoslavia in the 1990s, and the Iraq War in the 2000s. When he became Obama’s vice-president, he upped his game to call for armed intervention in countries all over the globe. Today the Middle East is a panorama of failed states and slave markets. By the time the curtain came down on eight years of death and destruction, the two wars Obama and Biden had inherited from their predecessor had ballooned to seven.

If we do nothing but continue to swallow Biden’s smarmy giveaways to the fossil fuel industry, to the banks and to all his rich criminogenic donors, continue to accept his promised veto of any Medicare-for-All legislation and succumb to his empty blandishments and his one campaign pledge — to get rid of Trump —our goose is cooked. The same old Biden, darling of Wall Street and wealthy corporatists, war hawk, BFF to right wing anti-abortion politicians, unwilling to buck his finance donors and end student loan profiteering by the banks, will come roaring back. This year make your vote count. It might be the last chance the people get for eight years. As a seasoned political observer reminded us: If you want to pull the major party that is closest to the way you’re thinking to what you’re thinking, you MUST show them that you’re capable of not voting for them. If you don’t show them you’re not capable of voting for them, they don’t have to listen to you [and they won’t].”