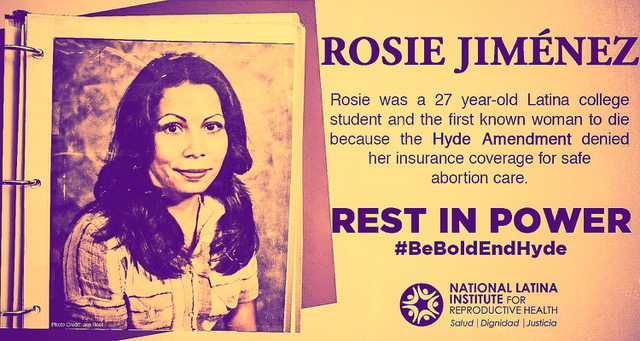 After the Supreme Court’s landmark decision in Roe v. Wade in 1973 legalizing abortion in all fifty states, most women assumed that public and private insurance companies would cover abortion as they did other medical procedures. For four glorious years that’s exactly what happened. Over 300,000 women on the federal insurance plan, Medicaid, were able to end unwanted pregnancies.

All that changed in 1977. Far-right, misogynist Congressman Henry Hyde managed to convince Congress to pass a law prohibiting Medicaid from covering abortions. The gender breakdown in Congress in 1977 was proof that in American politics gender trumps justice. Although women had been able to vote for fifty-seven years, only twenty-one women —three in the Senate and eighteen in the House —were in Congress.

The Hyde Amendment is not a law, but a rider that Congress has the option to attach or not to federal funding bills for the Department of Health, Education and Welfare (HEW). They have voted to attach the rider every year since 1977. Particularly in the early years, a surprising number of Democrats joined Republicans in authorizing and reauthorizing the amendment. Democratic leaders (mostly male), when asked about their support for the Hyde Amendment, have usually ducked the question.

The “party of the people” has managed to ignore the overwhelming majority of their constituents who are opposed to the Hyde Amendment. Even when they were the majority party in both Houses of Congress the Hyde Amendment sailed through to passage. More shameful, the catalog of misnamed leaders and “servants of the people” (male-dominated) who have whiffed when passing the Hyde Amendment was on the table include three Democratic presidents, two supine legislative bodies and the highest court in the land.

President Jimmy Carter, who didn’t have his humanitarian epiphany until long after his re-election defeat in 1980, opposed using federal funds for abortions either from Medicaid or any other federal insurance program. His reasoning came straight out of pro-life talking points — “As you know there are many things in life that are not fair, that wealthy people can afford and poor people can’t.” 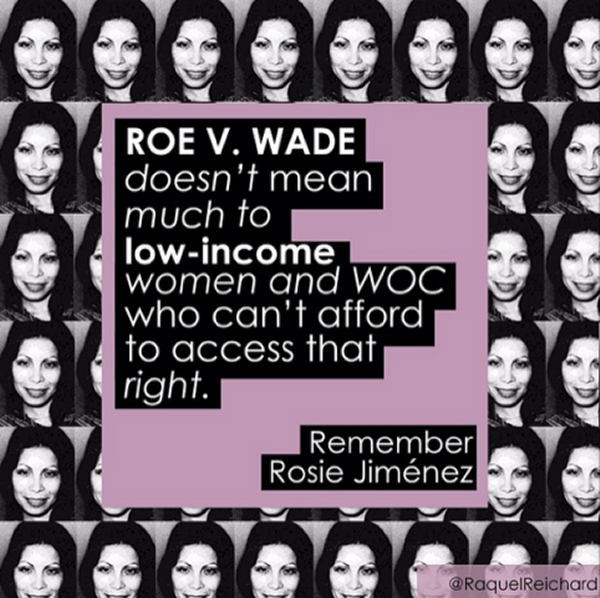 In 1992, Bill Clinton became the second Democratic president to sign onto the Hyde Amendment although as a nominee he had campaigned against it. He deserves some praise (faint) for insisting on a slight modification to allow abortion for cases of rape and incest in addition to the exemption for a mother’s health, adding up to less than 5% of abortions. Third on the list of Democratic presidents shafting poor women is the ultimate shape-shifter, Barack Obama, who in 2011 eager to cement his legacy as the “healthcare prez” sold out poor women and women of color by signing Executive Order 13535 establishing “an adequate enforcement mechanism to ensure that Federal funds are not used for abortion services consistent with a longstanding…restriction…the Hyde Amendment.”

What was going on in the halls of justice while injustice was prevailing in the other two branches of government?  More of the same, sadly. The all-male Supreme Court In two major decisions Maher v. Roe in 1979 —that “Roe v. Wade did not declare an unqualified ‘constitutional right to an abortion'” and “implies no limitation on the authority of a State to make a value judgment favoring childbirth over abortion, and to implement that judgment by the allocation of public funds” — and in 1980, in Harris v. McRae that a woman’s right to make choices about her body, did not carry with it “a constitutional entitlement to the financial resources to avail herself of the full range of protected choices.” The Court celebrated its misogyny with this infamous and incoherent declaration — “the Hyde Amendment leaves an indigent woman with at least the same range of choice in deciding whether to obtain a medically necessary abortion as she would have had if Congress had chosen to subsidize no health care costs at all.” 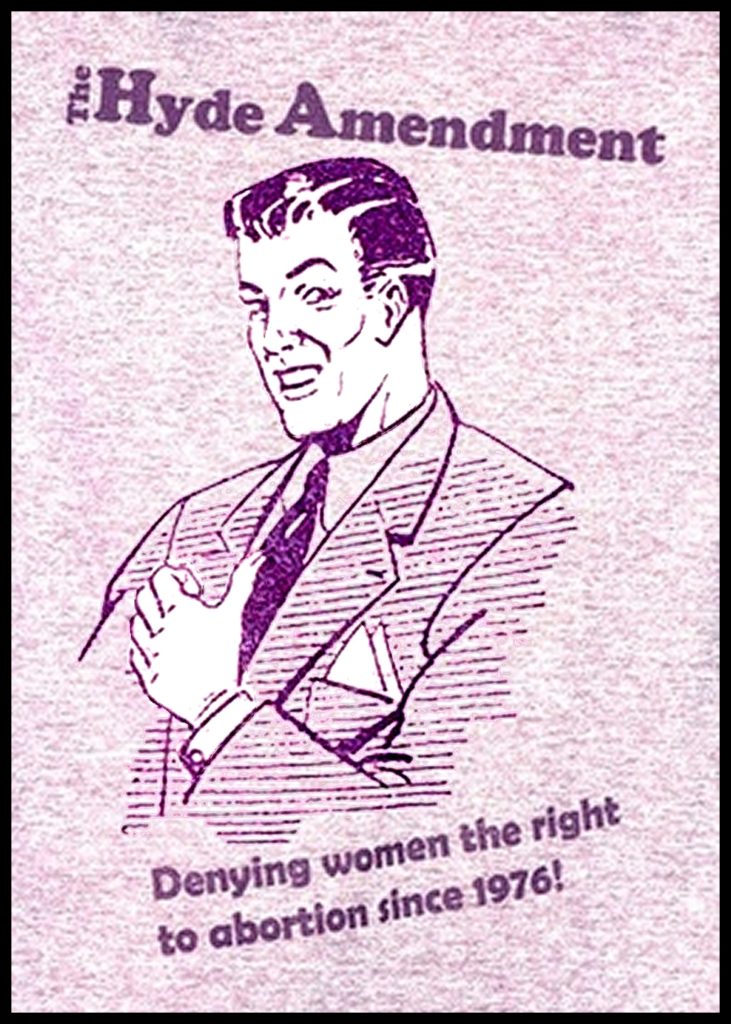 With elected leaders and Supreme Court justices unable to break the chains of their traditional disregard of one-half of the population, poor women’s fate fell to private, non-profit, self-identified defenders of choice. That posed a dilemma. Supported in the main by middle and upper class women, these organization usually highlighted the need to keep abortions legal over the concerns of poor women for whom Roe was out of sight, out of mind.

The rules of the game changed when twelve states passed strict laws limiting almost to extinction the protections in Roe. Another fourteen states are on the cusp of passing their own restrictive abortion laws. With the roof caving in and Joe Biden, with his sketchy history of abortion support rising to number one on the list of potential Democratic presidential nominees, the Hyde Amendment suddenly became a hot topic in liberal circles.

Biden’s career over almost five decades is emblematic of the Democrats’ inability to come to grips with the class divide in securing abortions. Fighting to maintain the legality of abortion while at the same time going along with legislation to exclude poor women from enjoying the same protections embodied in Roe, the Democrats repeatedly failed to challenge the Republican assault on poor women.

Among all Democrats, Joe was probably the most conflicted. Although he was vocal about his opposition to Roe in the seventies, in 1981 he graduated to voting for anti-abortion legislation. First, he voted with right wing Republicans for a constitutional amendment allowing states to overturn Roe. Fortunately, the bill never made it out of committee. Joe’s next misstep with the support of only one other democratic senator was his vote to remove the rape and incest exemptions from the Hyde Amendment. Trying for the trifecta of crappy, vicious bills in the same year, the Biden Amendment to the Foreign Assistance Act (FAA) prohibited U.S. foreign aid from being used to fund biomedical research into abortion or involuntary sterilization. It passed and remains part of the act to this day. For more on Joe’s history of supporting woman-hating bills read Joe Biden: Time to Exit Stage Right

Never one to hide his misogyny under a barrel, Joe was voluble on the subject. In March, 1988 in the Catholic Diocese Newspaper, he declared “abortion is wrong from the moment of conception…most effective pro-life groups are those who keep trying to push back the frontier.” In 1994, Mr. Joey-One-Note wrote a letter to his constituents bragging that he had “on no fewer than 50 occasions” voted against federal funding of abortions. For more on Joe’s blemish-splotched history and his unapologetic pandering to constituents who share his prejudices read Joe Biden: The Kind of Leader the U.S Doesn’t Need

As Joe makes his third try at the Oval Office, his flip flops in the name of political expediency have become legendary. Take his recent overnight reversal on the Hyde Amendment. On June 5th one of his campaign mouthpieces announced “…he still backs the Hyde Amendment, a measure that prohibits the use of federal funds for abortion with exceptions for cases involving rape, incest and when the life of the mother is in danger.” (“Biden still backs the Hyde Amendment which bans federal funds for abortions” NYTimes, 6/5/2019). Leaving Biden a little wiggle room, his go-to maneuver, Biden’s spokesperson went on — “given the current draconian attempts to limit access to abortion, if avenues for women to access their protected rights under Roe v. Wade are closed, he would be open to repeal.” A statement as bewildering as it is wrongheaded. Surely Joe knows that the decision in Roe legalizing abortion doesn’t offer the solution for poor women on Medicaid with unwanted pregnancies.

It didn’t take Joe very long —less than twenty-four hours— to figure his goose was cooked among Democratic primary voters if he continued championing Mr. Hyde’s folly. Bowing to the inevitable, shameless Joe tried to get out of the hole he had dug with his usual insincere and incoherent platitudes — “I’ve been working through the finer details of my health care plan like others in this race, and I’ve been struggling with the problems that Hyde now presents.” What’s that he said? Only a spineless politician would suggest that the “problems” of the Hyde Amendment are somehow more pernicious today than they were yesterday. No abortions for poor women yesterday is no abortions for poor women today. As he has done on numerous other occasions, Joe closed with the usual bravado— “no apologies for the last position.”

Perhaps the most surprising reaction to this nonsense came from Ilyse Hogue, President of NARAL — “At a time where the fundamental freedoms enshrined in Roe are under attack, we need full-throated allies in our leaders,” she said. “We’re pleased that Joe Biden has joined the rest of the 2020 Democratic field in coalescing around the Party’s core values…”

In the pantheon of clueless, dumb responses, this one has to take the cake. The President of the leading U.S pro-abortion rights organization absolving Biden of his shameful history of pandering to right wing anti-abortion sentiments. Not only absolving him but welcoming him back into the pro-choice movement purging from the historical record his half century of brutal attacks on women, especially poor women.

(You will find a more in-depth look at the evolution of the Hyde Amendment and the Democrats who supported it in Abortion in the U.S.—Legal Not Always Attainable 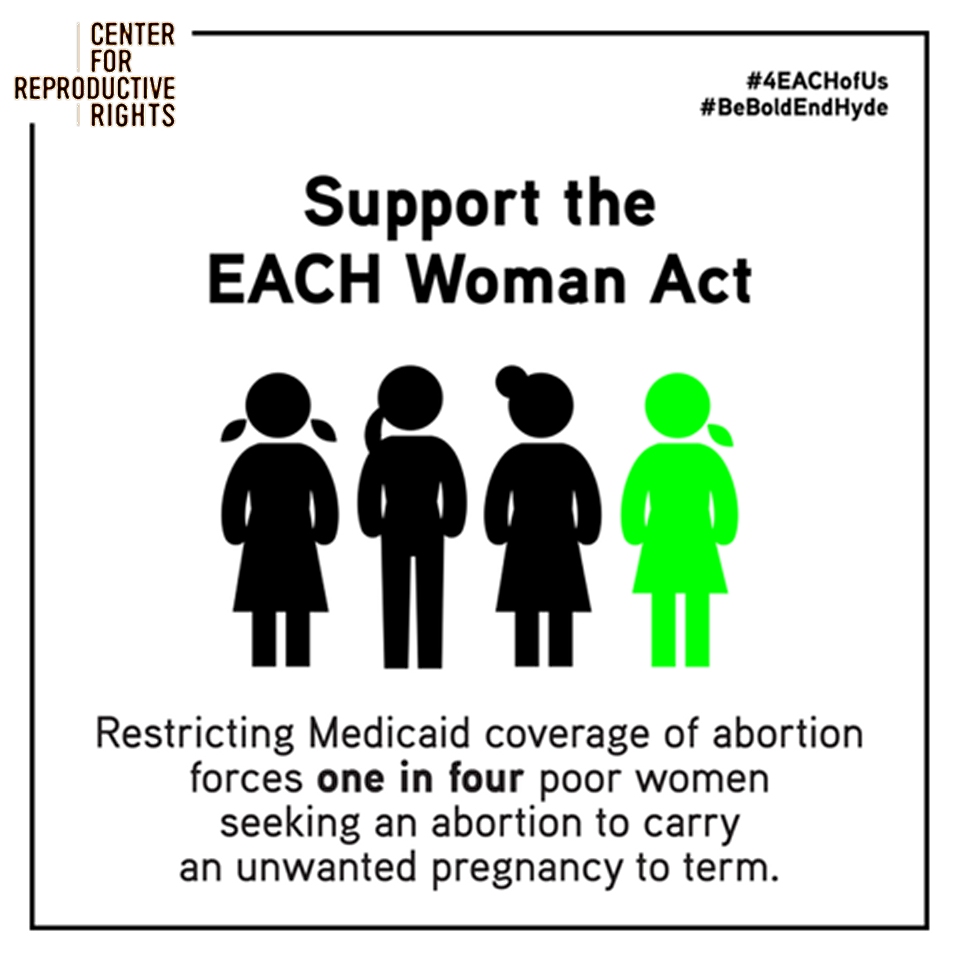 Is there any light at the end of this particular tunnel? Thanks to a few determined pro-choice lawmakers, Tammy Duckworth, Kamala Harris, Mazie Hirono, Patty Murray, and Barbara Lee, and others, the Hyde Amendment is teetering on the brink of elimination. The “Equal Access to Abortion Coverage in Health Insurance (EACH Woman) Act first introduced by Representative Barbara Lee in 2015 would guarantee “That every woman who receives her health care or insurance through the federal government will have coverage for all pregnancy-related services including abortion. The bill would also bar federal, state and local authorities from passing laws to bar private insurance coverage of abortion.

Unlike previous tries where support was meager, this time with 102 women in the House, 42 women of color and 89 of them Democrats, the EACH Woman Act has 183 representatives on board and by some estimates needs only 35 more votes to pass. Its fate in the Republican-controlled Senate is dubious.

Whether the Senate passes it and Trump signs it, the growing acknowledgement that Roe offers no protection for poor women in the pay-to-play system that passes for American politics is good news. The next hurdle is to get a Democrat with some progressive leanings (Bernie Sanders and Elizabeth Warren are by far the best of the current crop) to run against and defeat President Trump. Achieving equal treatment for women regardless of their economic circumstances is going to require a leader who is not afraid to buck the radical right or their money. Until the U.S. joins other developed countries and opens up the political system to third, fourth, even fifth parties, the best we can hope for is a Democratic nominee whose victory is born out of the enthusiastic support and hard work of millions of ordinary Americans rather than millions of elite dollars. It will take a lot longer to build an America whose last name isn’t empire.