Welcome to the land of plutocratic drug companies and their enablers – major U.S. charities once considered fire walls against the inroads of a crushing dehumanizing capitalism, now reduced to Big Pharma’s image consultants. Today’s non-profits and drug companies are in a symbiotic relationship with one goal —amassing profits.

In 2018, the charitable giving industry saw donated money increase 1.6% while the number of donors was decreasing by 4½. That dichotomy was a result of the big guns in philanthropy devoting most of their time and resources chasing million dollar gifts while paying dwindling attention to modest givers. Seeking donors with the capacity to build a library, endow a museum or establish a new department on a college campus is today’s new fundraising normal. Publicly, fundraising organizations inveigle Hollywood A-listers into promotions touting their good works. Privately, they make business decisions on the basis of a donor’s “value” (prospective or actual).

The fly in the ointment is that most humongous gifts come with lots of strings attached. For many non-profits catering to the demands of rich donors is a full-time job. Beyond the tax deductions, image make-overs and naming rights, mega rich donors often want a seat on the board where decisions over personnel and operations are made.

As the wealthy donate more and more of the money that is a charity’s lifeline, they take a more visible role in the charity’s public relations.  That’s where Purdue Pharma and its owners, the Sacklers come in. An uber-rich corporation, the family-owned drug company was once able to use its philanthropic muscle to paper over the major public relation nightmare consuming them. Unfortunately for the Sacklers, the stench of intentional wrongdoing and the mounting toll of victims have finally proved impossible to keep under wraps. When even the New York Times usually hugely supportive of wealth and power runs the head line “Sacklers directed efforts to mislead public about OxyContin court filing claims.” (NY Times Jan. 15, 2019), savvy operators like the Sacklers have to face the inevitable — their goose may not be cooked but it’s certainly in the oven.

In a deadly combination of company duplicity and doctor gullibility, the death toll from opioid abuse has reached 200,000 in the seventeen years between 1999 and 2016. The major culprit is Purdue’s blockbuster pain killer, OxyContin. To make matters worse, recently revealed company emails document the deliberate and ultimately catastrophic decision the family made to hide the findings by Purdue’s own scientists that opioids like OxyContin are highly addictive and should be prescribed sparingly, if at all. Tone deaf to the end, when the death toll became a media sensation, Purdue’s then-CEO, Richard Sackler had a brainstorm — “Calling drug addicts ‘scum of the earth’ will guarantee that I become the poster child for liberals who want to… just distribute the blame to someone else.”

Connecticut’s Attorney General William Tong wasn’t buying it, calling out the Sacklers for “depraved indifference to human life and the cause of this crisis.

As the epidemic spread and wormed its way into virtually every part of the U.S., the Sacklers were feeling no pain as they became the nineteenth richest family in the U.S. with a fortune estimated at $13 billion. (Forbes, 2016) OxyContin alone generated revenues of $35 billion. “Money earned off people’s lives being spent. This is dirty, bloody money…” (Sidney Wolfe, founder and senior advisor Public Citizen Health Research Group) 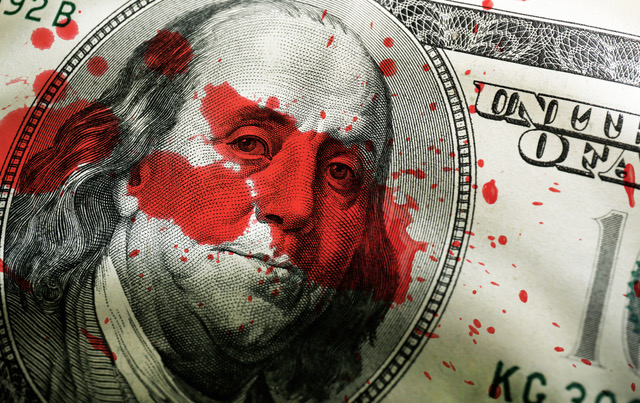 As the Sacklers sensed which way the wind was blowing, they went on a public campaign to bolster their fundraising “cred.”. It wasn’t long before the non-profit race to the Sackler feeding trough was on.. On your next trip to Cambridge be sure to visit the Sackler Museum at Harvard. If you’re in New York, how about stopping in at the Sackler Center at the venerable Guggenheim, or take a brief subway ride to the Sackler Educational Lab at the Museum of Natural History.

If you’re really into theatre of the absurd jog over to The Sackler Institute for Developmental Psychobiology (at Columbia University) which passes itself off as the “vision” of Mortimer D. Sacker “to better understand the developmental processes leading to health and disease.”  Too bad Dr. Sackler’s myopic vision wasn’t focused on his own laboratory as it spewed out the poison that kills 130 people every day. Even the Capitol mob gets to share in the “Sackler experience” at the Smithsonian Museum. 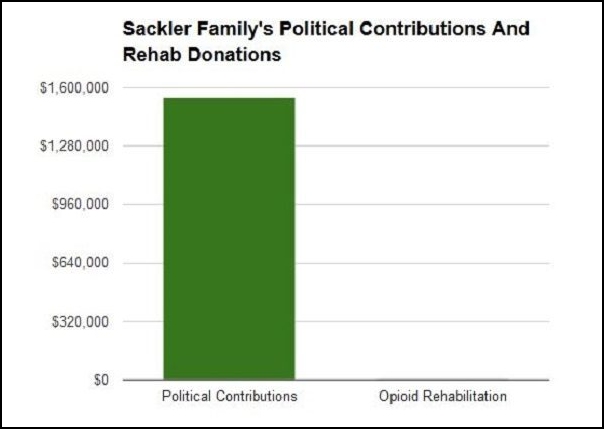 One group of charities that has never seen one penny of Sackler money — addiction rehabilitation centers.

Then the backlash set in. Museums Cut Ties with the Sacklers as Outrage Over Opioid Crisis Grows” (NYT, March 25, 2019). One might hope these cultural and educational non-profits saw the light and in a crisis of conscience decided to sever their relationship to the scandal-ridden Sacklers. After all there’s more than enough evidence — drop in the life expectancy of Americans two years in a row, 70,237 drug overdose deaths in 2017, a 10% increase in mortality over 2016 among mostly younger Americans, and the active role of the Sackler family in the monumental deception that created the opioid crisis — to refuse their tainted money. In a bizarre twist, U.S. beneficiaries of Sackler largesse have pussy-footed around the issue. The statement put out by Columbia University is a good example of the two-step most American institutions are doing around the scandal — “We have re-evaluated accepting donations from the Sackler family’s philanthropies and are not taking gifts from them at present.” (emphasis mine)

One institution, the Guggenheim Museum, has bucked the trend and, after a little hemming and hawing, publicly cut ties with the Sacklers — “The Guggenheim does not plan to accept any gifts [from the Sacklers].”

Unlike their U.S. counterparts, the most prestigious cultural organizations in the U.K. where opioids were prescribed less frequently and the epidemic less catastrophic, made no bones about slamming the door on future Sackler “generosity” — “… in the present circumstances we do not think it right to seek or accept further donations from the Sacklers.” (statement from the Tate Museum). Why is it that the superstars of the U.S. non-profit industry are far more tolerant of serial bad behavior? Is there something in the water or is it just the lure of “free” money that makes the well-meaning executives of major charities temper their outrage?

Shunning by the world that used to fawn on them and bombarded with a raft of unfavorable publicity are small potatoes compared to the threat posed by Connecticut, Massachusetts and a host of other states determined to hold members of the Sackler family criminally liable for ‘pursu[ing] profits —and financial gain —over the incredible and frankly immeasurable human toll and human cost of the opioid and addiction crisis.” (CT Attorney General William Tong)

But wait there’s more than one way to dig yourself out of a hole if you’re a billionaire criminogenic family and you need to escape the long arm of the law. Mount a huge campaign to fatten the war chests of members of Congress whose major concern is keeping their jobs, a task which in some cases requires a mountain of money.

Here is a snapshot of the millions of Sackler dollars that candidates and their political action committees (PACS) have accepted. Since the creation of their cash cow OxyContin in 1995, Purdue Pharma has doled out $1.3 million to elected officials and $1 million to their PACS. In the 2018 election cycle, seven congress members, six Republicans and one Democrat received money from the Purdue Pharma PAC.

Individual family members charted their own course. One, Beverly Purdue, contributed to both Elizabeth Warren and Cory Booker in 2018. Hillary Clinton benefited from Sackler money for her first senatorial run and two unsuccessful presidential campaigns. Even Barack Obama accepted a donation of $19,000 in 2008 for his first presidential campaign.

When they weren’t fattening campaign coffers, Purdue Pharma executives under the watchful eyes of the family, were conducting aggressive lobbying campaigns. Nine of ten Sackler lobbyists worked on Capitol Hill before going over to the dark side. One, Dora Hughes, was a health policy advisor for then-Senator Barack Obama. In 2017, Purdue coughed up $940,000 to lobby Congress. As the bodies piled up and the judiciary woke up, in 2018, Purdue’s lobbying expenses reached $1.2 million.

Unquestionably the word has reached the medical community that opioid addiction is real and often leads to death. Many doctors are starting to follow guidelines issued by the CDC (Centers for Disease Control and Prevention) aimed at stemming the flow of opioids for pain control. However, early indications are that guidelines in the absence of regulations are only moderately successful. Unfortunately, in the U.S. where the corporate capture of healthcare is a done deal, government regulatory agencies have buckled to the demands of the industry to butt out. Hence while many prescribing doctors have no choice but to limit the duration of their opioid prescriptions (most pharmacies won’t fill opioid prescriptions for more than three days), many doctors have not modified their prescribing habits and continue to prescribe opioids even when non-opioid pain medications might work as well.

The damage wrought by the untrammeled excesses of big pharma will be a deadly problem for a very long time. One analyst predicts that up to one-half million people will die from opioid abuse over the next decade. Most health policy experts agree that the crisis will not begin to subside until after 2020.

The most powerful country in the world refuses to stop the slaughter of innocent patients who pay for the most expensive care in the world and get the crappiest results. Purdue is only one example of the way peoples’ lives are impacted by the pursuit of profits in the U.S. healthcare industry.  While more Americans die every year from opioid abuse than died in twelve years of fighting in Vietnam, the truth is that the entire U.S. healthcare system is fraught with victims. One study from Johns Hopkins puts the death toll from medical errors at 250,000 annually. The system is in free fall. Purdue along with the entire pharmaceutical industry makes insane amounts of money while the FDA (Food and Drug Administration) looks the other way, the peoples’ elected representatives dial for pharmaceutical dollars and the drug lobby blames the victims. The system is rigged and its victims are those who need care. The solution is the same as it’s been for decades: single payer healthcare. It’s time for the US. to join almost every country in the world and give Americans the excellent healthcare they deserve. 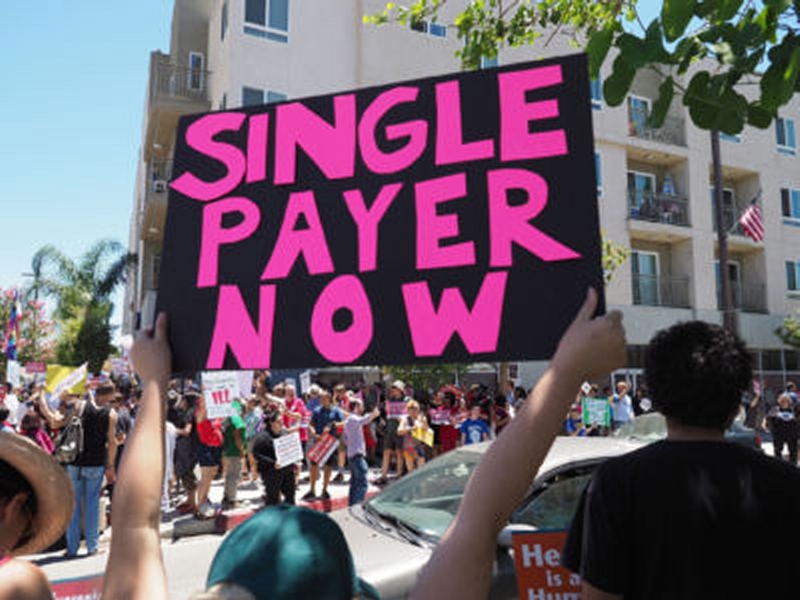