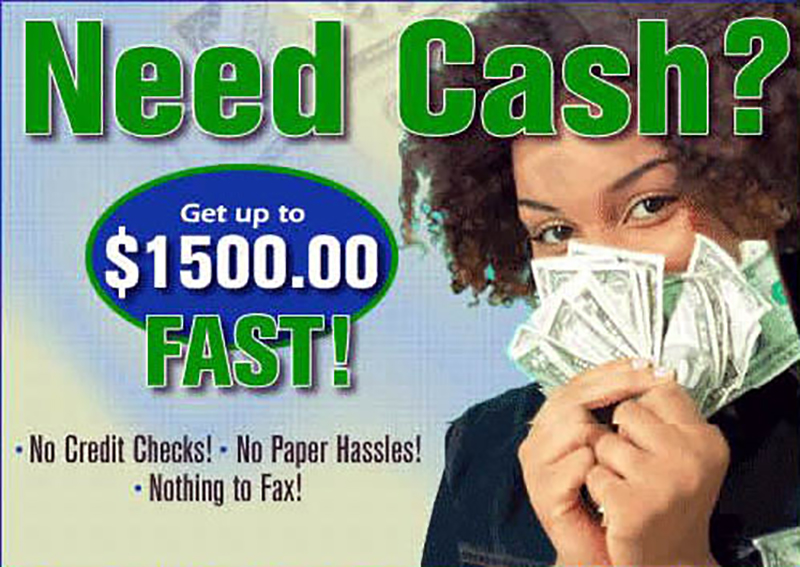 Remember the hullabaloo when the predators behind payday loans were finally outed? Not that we hadn’t always known that something was rotten in payday land. What we didn’t know was that our political leaders were co-conspirators.  Overwhelming us with phony reassurances that “[this is] … our new American moment… There has never been a better time to start living the American Dream.” (President Trump’s first State of the Union speech)

What he “forgot” to mention was that “Living the American Dream” these days has absolutely everything to do with “what’s in your wallet” and for most Americans, the answer is “Not Enough.”  Need proof?  According to the government’s own figures, 30 million Americans are unbanked or underbanked (translation: no bank account or one containing a pitifully small amount).  If that doesn’t clue you in, what about the 60% of Americans who couldn’t scrape together $1,000 for an unplanned expense. American dream? Sounds more like the American Nightmare.

As far as real misery goes in this land of plenty, “you ain’t heard nothing yet.” In 2015, according to the U.S. Department of Agriculture, 41 million Americans —13 million of them children —were in danger of starving to death (the government’s euphemism “food insecure”). Would it surprise you to learn that one-half of all U.S. school-aged children qualify for free or reduced price lunches during the school year? Don’t even think about the situation these kids find themselves in during the summer when those free lunches disappear.

What to do about grinding poverty in the midst of so much vast wealth? The Trump administration has a dandy solution. Get the Senate (it’s already a done deal in the House) to pass a farm bill with draconian new requirements for Food Stamp (SNAP) recipients, including demands for more complicated documentation in the form of paper work, onerous work requirements, and zero tolerance for non-compliance (where have we heard that). Here’s how President Trump described its passage — “Farm bill just passed in the House. So happy to see work requirements included. Big win for the farmers.”  What the President left out is that according to The Center on Budget and Policy Priorities (CBPP – either a bi-partisan or left-leaning public policy think tank take your pick) if the bill passes in the Senate, it will have a long tail —depriving over one million households of Food Stamps which translates into more than 2 million men, women, and children.

If you’re not below the poverty line, a different kind of stick-up threatens your economic existence.  Banks and financial institutions are robbing you blind and its perfectly legal. Guess how much U.S. banks made off with in overdraft and a bunch of other nuisance fees? In 2015, $42.3 billion.

It’s easy to see why payday loans are so popular. In the U.S., poverty is becoming a fact of life for virtually everyone but the top 10% of earners. Which accounts for the fact that 11% of Americans (36 million) are, in bank-speak, “credit invisible.” They have no credit history which pretty much disqualifies them from getting traditional loans at banks or credit unions. They’re not the only ones with no place to turn in a financial emergency. What about the 44 million ex-college students with a bare-bones job and an average school loan debt of $30,000 (for 2017 graduates the average debt is a terrifying $40,000). Not many traditional financial institutions would give them a high-five. In an increasingly contingent job market where uncertainty is the only certainty, full-time jobs are as extinct as the dodo bird, CEOs make 339 times more than their workers, the gig economy is bursting at the seams and producing little in the way of a predictable income and the minimum wage is nowhere near a living wage, “alternative” financial services (aka loan sharks) become the only option.

The most popular alternative financial service and the easiest to access – payday loans. No fuss, no muss. All you need to walk out of one of their more than 20,000 stores (six thousand more than McDonald’s restaurants) is a job, bank account and an ID.  That will get you a loan of $375 that, with interest and fees, will eventually set you back $520, or more if not repaid in two weeks. If you can’t come up with the money, there’s always another payday loan available and the clock and fees start ticking again. For many workers, payday loans are a main-stay and for most, not a one-off —70% of borrowers take out a second loan, 80% of them within two weeks of repaying a previous one. With a plethora of repeat business, payday lending is a profit bonanza, generating $46 billion in loans and $9 billion in profits. 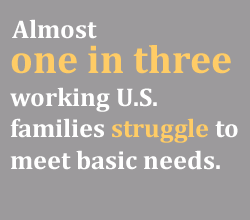 Most of that bonanza is linked to the souring of the U.S. economy. With corporation hightailing it out of town taking their production facilities with them, uncertainty dogs the life of most U.S. workers. Families who once thought they were doing okay are struggling to feed their families. Look how the worm has turned in twenty-five years. In 1989, 20% of working families needed food stamps. In 2015, that figure jumped to one-third.

Where are employers in this worker hell hole? As the fair-haired children of the present administration and helped along by a compliant congress, they pulled off a $2 trillion heist of U.S. taxpayers.  Even that wasn’t enough.  Corporate pirates like Walmart, McDonald’s, Amazon, 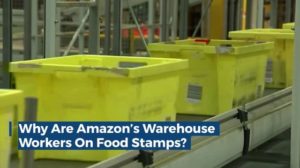 and the list goes on continue to pay unlivable wages to their workers making them eligible for public assistance —Medicaid, subsidized housing and food stamps —to the tune of $100 billion tax dollars. Workers needing help include one-half of minimum wage fast-food workers, one-quarter of part-time college faculty and one-half of child care and home health care workers.

The yawning gap between the lavish life style of the rich and the miserable existence of everybody else was highlighted by the United Nations Special Rapporteur.

“The United States is alone among developed countries in insisting that while human rights are of fundamental importance, they do not include rights that guard against dying of hunger, dying from a lack of access to health care or growing up in a context of total deprivation.”

The response of Trump & Co. as delivered by Nikki Haley, U.N. Ambassador. “Misleading and politically motivated…patently ridiculous for the United Nations to examine poverty in the United States.”  Several weeks later, the U.S. took its toys and went home, withdrawing from the Human Rights Council in the middle of its 3-year term.

“Misleading…ridiculous to examine poverty in the U.S.”  According to official government figures on poverty in America, nearly 140 million people are either poor or “low income” That figure represent 44% of the U.S. population. 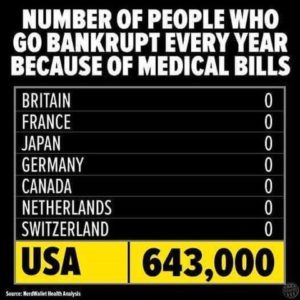 Making the case that many Americans are “dying from a lack of access to health care,” a 2015 Harvard study reveals that the number one cause of bankruptcy, accounting for 62% of all bankruptcies, is medical debt. As a testament to the inadequacy of U.S. health care “reforms,” notably Obamacare, almost three-quarters (72%) of these debtors had health insurance. Job losses and student loans (by law the loan itself is not forgivable) are other major reasons for bankruptcy. Is it any wonder that 69% of payday loans go to cover monthly expenses — rent, food, utilities, credit card bills.

As payday loans become bigger players in U.S. finance, their prominence may be symptomatic of an unraveling economic system. In fact, college-educated home owners earning $50,000 – $70,000 are the fastest growing segment of the payday loan market. As one expert noted “the rug has been pulled out from underneath the American worker.” Between 1973-2016, workers’ productivity increased 74%, workers’ wages 12%.

The new tax reform (deform) bill exacerbates workers’ economic straits by tag-teaming the corporate windfall with new calls for austerity. Congressional Republicans have floated a bill that they claim will balance the budget in nine years. Oh, right, did I forget to mention that most of the “savings” will come out of what political leaders like to think of as “entitlements (although we actually pay for them every day of our working lives). House Budget Committee Chairman Steve Womack claims we haven’t a moment to lose: “The time is now for our Congress…to confront the biggest challenge to our society… You might think his urgency was motivated by the 13 million children who don’t have enough to eat or maybe he was shocked to learn that 66 million Americans have no savings at all. You’d be wrong. Here’s what’s got his knickers in a knot — “there is not a bigger enemy…than the debt and deficits.” Leave it to congressional elites to hit on the perfect solution: the austerity gig — a ten-year plan to cut Medicare by $537 billion, the federal contribution to Medicaid by $1.5 trillion and slash $4 billion out of Social Security.

You don’t need a crystal ball to see which way the wind is blowing. As workers feel the economic sword of Damocles slowly descending with wage stagnation, reduced benefits, rising income volatility, tightening lending restrictions on bank loans and credit card advances, alongside rising prices in health care, utilities, and energy, the payday lending industry masquerades as salvation. Sooner or later, payday loans may be the one thing standing between workers and homelessness or starvation or both.

If Americans are missing the boat when it comes to benefits the rest of the developed world enjoys like single payer universal health care, tuition-free college and federally funded day care, payday lenders are becoming the canary in the coal mine signaling the cancer metastasizing in U.S. society that is puncturing the myths of exceptional America and superpower America. Perhaps America has run out her string.

One hundred years ago, as the war to end all wars finally ended, Woodrow Wilson made this grandiose prediction: “The world will turn to America for those moral aspirations which lie at the heart of all freedom…all shall know that she puts human rights above all other rights … America indeed shall…show the way.” Somewhere along that mythic way, America became imperial America out to conquer the world and exterminate the “enemy” leaving the American people struggling to hold onto even a fragment of the economic prosperity past generations considered their birthright. Welcome to fortress America where the price of admission starts at $1 million and outsiders need not apply.