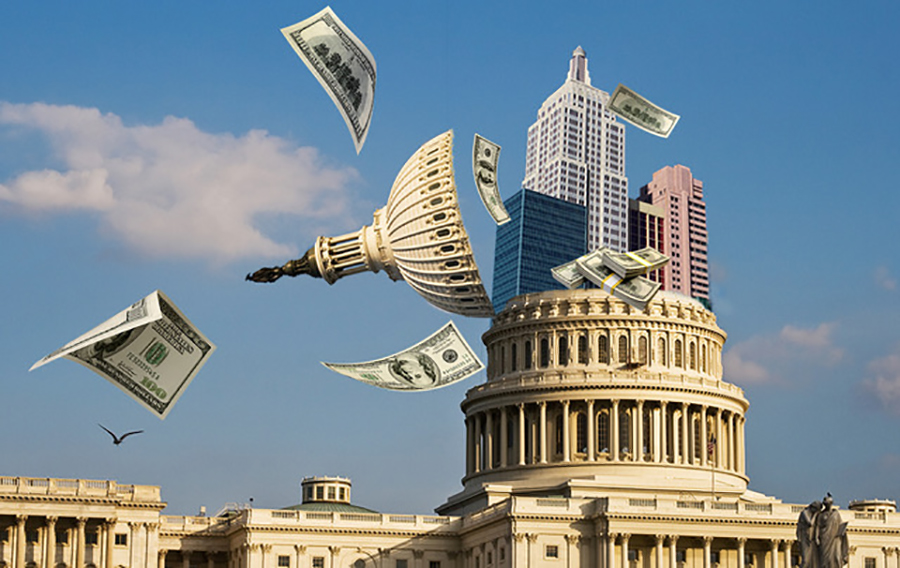 Act 1 —January 18, 2017 —Confirmation hearing for Department of Education Secretary nominee Betsy DeVos in front of the Senate Committee on Health, Education, Labor and Pensions: A sampling of the future Secretary of Education’s deep thinking on and incisive grasp of the thorny issues involved in educating America’s children:

Senator Chris Murphy: “Do you think guns have any place in or around schools?”

DeVos: “I think probably there [referring to a school in Wyoming], I would imagine that there is probably a gun in the school to protect from potential grizzlies.”

And so it went, beginning with DeVos’ introduction by none other than former Democratic Senator Joe Lieberman, a case study in everything that’s wrong with the Democratic party and possibly democracy itself. His introduction was an over-the-top hagiography of the nominee “I know that some people are questioning her qualifications… based on the fact that she doesn’t come from within the education establishment… But honestly I believe that today that’s one of the most important qualifications you could have for this job.”

For the record, Senator Lieberman, DeVos has never taught in, managed, or even attended a public school, nor have her children. She has never held public office, Using the same criteria for other cabinet posts, Stormy Daniels would make an awesome Defense Secretary. 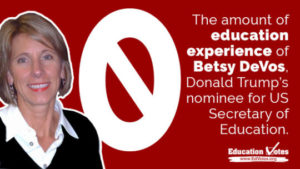 Betsy DeVos is neither more nor less than a billionaire oligarch who has used a considerable chunk of her fortune to support public and private charter schools and private vouchers (many for religious schools, one of which her children attended) in Michigan, her home state. According to DeVos, parents are lining up to ditch the public schools and get on the free-market education train as it pulls out of the station. “Parents no longer believe that a one-size-fits-all model of learning meets the needs of every child… other options exist, whether magnet, virtual, charter, home, faith-based or any other combination.”  Are those “other options” living up to her hype? A federal review in 2015 found “an unreasonably high percentage’ of charter schools are on the list of [Michigan’s] lowest performing schools. The number of charter schools on that list had doubled since 2010, after the passage of a law a group financed by Ms. DeVos pushed to expand the schools.”

Then there’s the comment by Diane Ravitch, George H.W. Bush’s assistant secretary of education, “[DeVos will be] the first education secretary in the history of the office who’s openly hostile to public education.”

Act 2 —It took a village and two administrations to institutionalize a corporate take-over of a healthy slice of U.S. elementary, middle, and high schools.

We’ll start the clock at 2010 (although the previous administration of George W. Bush got the ball rolling up hill with his plutocratic neo-liberal No Child Left Behind [NCLB]) with a center right Obama administration proudly announcing the creation of NCLB’s heir, Race to the Top.

Most liberals and ersatz progressives who voted for Obama in 2009 ignored the naysayers and insisted that President Obama’s campaign promises would remain buoyant once he slithered into the White House. Instead, the air went out of the “hope and change” balloon as the hard work of rewarding corporate donors took off. Obama admitted as much when he crowed “[We are] “doubling our investment in charter schools.” Hypocrisy being a major feature of the Obama administration, guess where he chose to brag about his newest education innovation, Race to the Top — at the 100th anniversary of the Urban League, the organization whose members’ children and grandchildren were at the top of his hit list.  Obama assured the Urban League audience that

“…The most important thing we’ve done…is Race to the Top.  We said to states, if you are committed to outstanding teachers, to successful schools, to higher standards…to excellence for all children, you will be eligible for a grant to help you attain that goal…So far the results…have been powerful.” 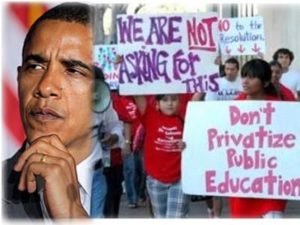 Of course, it didn’t turn out that way. Race to the Top was in reality far from a panacea for the ills of 21st century public education. A union busting, privatization scam, it turned into a Darwinian master plan spurring no-holds-barred competition among all 50 state education departments. The pot of gold at the end of this besotted rainbow —millions of federal education dollars. It was all about winning, beating out other states by moving the privatization needle faster and further. Slashing public school budgets and increasing the number and size of “innovative” education projects (a fancy name for corporate charter schools) and mandatory performance-based standards tying teacher evaluations to metrics like student scores on standardized tests from year to year were the ingredients in a corporate stew that rewarded winners and punished losers. Race to the Top was a reminder that U.S. children were being sold to the highest bidder.

The next box to check was the selection of the “right” person to implement this boondoggle. Obama settled on Arnie Duncan, former chief of the Chicago public school system (fourth largest in the U.S.), a reliable political operative whose sensibilities (like his future boss’) were honed in the hard-scrabble world of the Chicago Daley machine where political muscle was king and graft and corruption endemic. Duncan’s lack of even the hint of an education credential made him a shoe-in for the top post in Obama’s DOE (Department of Education). An added plus was Duncan’s implementation in Chicago of the grandly named Renaissance 2010, a miniaturized version of Obama’s Race to the Top. Renaissance 2010 did for Chicago what Race to the Top would do for the nation’s public schools — encourage profiteering and corruption among get-rich-quick oligarchs, fund private charters using public school budgets and stand mute while private schools cherry-picked the top tier of students leaving the mass of poor children, those with disabilities and special needs in woefully underfunded public schools.

The heart of Race to the Top, as it had been for Renaissance 2010, was a cornucopia of standardized testing. A study conducted in 2015 revealed that the average student took 112 high-stakes tests before graduating high school. Did all that testing make kids smarter, or have any discernible benefit?  Most studies discount the possibility that serial testing can be correlated to student achievement.  Rolling out “Race to the Top” in his first term, Obama was able to reward corporate honchos with juicy contracts to run charter school and not one minute too soon as election season approached and these same donors were on the hook for subsidizing Obama’s second term.

To illustrate the pernicious and long lasting effects of the private plunder of public schools —even after Duncan left Chicago the devastating blows continued to rain down on that city’s school children. Under Obama’s ex-chief of staff, Rahm Emanuel who had been elected mayor, 50 public schools were summarily closed, most in minority neighborhoods, leaving the neighborhood children to be bused to schools in other districts. Middle-class kids (predominantly white) had their choice of magnet and private charter schools. In this way, Emanuel restarted the gravy train for his wealthy campaign bros with new profit opportunities sprouting from soon to be built charter schools. With the public education treasury looted, it didn’t take long for the aftershocks — “Many school districts…lost enrollment and revenue…which has increased inequities in the educational experience for students.” (Economic Policy Institute). 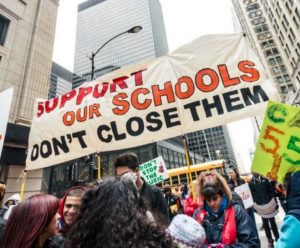 Why would a former “community organizer” whose campaign slogan was the prize- winning “hope and change” slogan pick a political hack to reform a public education system suffering from a myriad of societal woes, the biggest being inequality. According to the United Way’s Alice Project (United Way acronym: Asset Limited, Income Constrained, Employed), in the richest county in the world, exceptional America, “Nearly 51 million households [43% of American households] don’t earn enough to afford a monthly budget that includes housing, food, child care, health care, transportation and a cell phone.”  How well would you expect those children to perform in school?

Obama’s wealthy oligarchs discounted the possibility that economic inequality could affect children’s performance preferring to believe that the real culprits were “incompetent” teachers, “ruinous” collective bargaining agreements and “bloated” bureaucracies. Their solution — embraced by Obama — Race to the Top. The losers in this “dog eat dog” approach to education—America’s already underserved children.

In 2017, the far-right Trump’s administration took over, chose Door A where all the oligarchs were waiting to cash in. Trump didn’t disappoint, naming DeVos as Secretary of the DOE where public school privatization went from a cutthroat competition among the states for federal dollars to an all-out food fight among Trump’s corporate donors and assorted swamp dwellers.

Let’s start with the basics. Betsy DeVos is a train wreck. A soulless caricature of a thinking, caring human being who marches to the beat of Trump’s assault on the poor and vulnerable. Lest you think that opinion is reserved for the more liberal and progressive among us, here’s a poll conducted in September of 2017 that found 40% of voters had an unfavorable view of DeVos, giving her the unenviable distinction of being the least popular of Trump’s generally unpopular cabinet members. Her policies have targeted transgender students —withdrawing guidelines allowing them to use the bathroom of their gender identity, disabled students —removed language in the Individuals with Disabilities in Education Act (IDEA) meant to increase parental involvement in the education of their kids, and even suggested that monitoring the act might best be left to the states. Her testimony revealed her ignorance of problems like racial inequity and racial segregation, her rejection of increased funding for early childhood education, and her single-minded determination to push “school choice” and vouchers as the panacea for all America’s educational problems. Increasing the number of corporate charter schools and the availability of vouchers will further drain local education budgets leaving a woefully underfunded public education system serving mostly poor and minority students. Odds are that the unraveling of a public education system almost 200 years old is at hand. A society that commodifies education is a society that has lost all hope of reversing inequality and risks economic determinism becoming destiny. 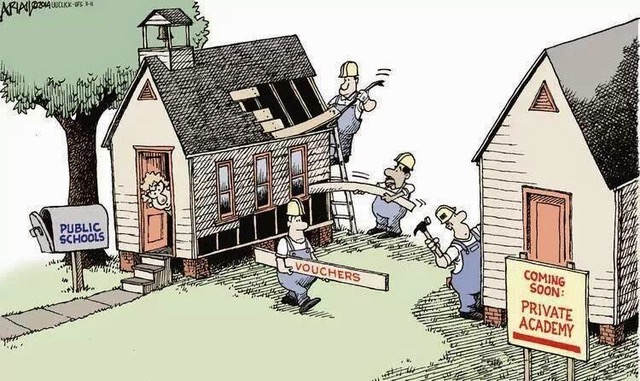