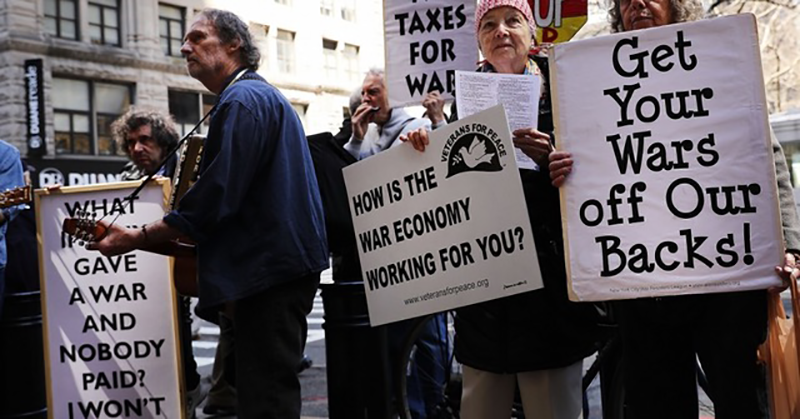 “The American people dearly love to be fooled, to worship politicians
of whom they have created portraits which bear little or no
resemblance to the originals.”
—The Nation, Summer, 1924

The streets are so quiet you can hear a pin drop. At a time when the U.S. is fighting 8 wars — in Afghanistan, Iraq, Yemen, Somalia, Pakistan, Libya, Somalia and Niger — has 800 bases in foreign 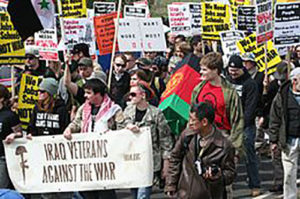 countries, 250,000 troops stationed in 160 countries and territories, you might expect a vibrant peace movement. You’d be wrong. In fact, the last gasp of the peace movement occurred in 2002-2003 when people in 600 U.S. cities took to the streets to protest the approaching Iraq War. As “shock and awe” rocked Baghdad and the U.S. assault on a sovereign nation ramped up, anti-war protests went into high gear.  A Gallup poll in 2007 concluded “Since the summer of 2005, opponents of the war have tended to outnumber supporters. A majority of Americans believe the war was a mistake.”   A little over a decade later and there’s nary a protestor in sight.

“If the Syrian regime uses this poison gas again, the United States is locked and loaded.” —American Ambassador to the U.N., Nikki Haley, Trump diplomatic-speak

Whatever happened to the natural symbiosis between progressives and the anti-war movement? Now more than ever, progressive voices need to be raised in support of world peace and against the political influence of war hawks (Nikki Haley and John Bolton et al.), war profiteers (the defense industry, Boeing, Raytheon, Lockheed Martin et al.) and quick-buck retired military officers in the media (Gen. “Spider Marks, Gen. Barry McCaffrey et al.)

It’s not happening. The remnants of the U.S. progressive movement have abandoned the anti-war movement and turned their attention to social issues, —LBGTQ discrimination, same sex marriage opponents, anti-abortion crusades, sexual predators in business and media —worthy of denunciation and ripe for reform but in the face of perpetual war of a lesser magnitude. The U.S. continues to export a lethal stew of destruction and death, creating piles of rubble where some of the world’s historic cities once stood, transforming enclaves of people of differing ethnicities and religions living as neighbors into warring camps of armed civilian and strengthening the grip of autocrats on populations who have seen their sovereign leaders upended, usually in U.S.-supported coups.

The fall-out from our imperial hubris has left its mark on domestic law enforcement, most notably a new kind of policing — militarized with an abundance of SWAT teams armed with automatic weapons patrolling in armored vehicles, blurring often erasing, the constitutional line between the state’s right to impose codes of conduct on civilians and peoples’ right to protect their privacy. Eternal surveillance, we are told, is the price of living in a dangerous world. Problem is the dangerous world we live in is a creation of the most powerful, most expensive, most savage military force ever seen on the planet. Hand in glove with the loss of constitutional rights, particularly the 1st and 4th amendments —shadows of their former vibrant selves — are police forces across the nation whose motto “protect and serve” has been updated to “kill anything that moves,” particularly if it’s black, young and male. The ultimate cop out for the national surveillance state — “If you don’t have anything to hide, then you have nothing to worry about.”

How did progressives and the anti-war movement become disconnected?  The seeds were sown almost a half-century ago in 1971 when “tricky Dick” Nixon on the wrong end of massive anti-war protests on campuses, at rock concerts, in the streets and most alarmingly (from his point of view) coming from a substantial cross-section of active duty and ex-military soldiers. Ending the draft would “quiet” the anti-war movement, both on campuses and in the streets Nixon figured. In the short run the plan proved amazingly effective as most organized protests vaporized. In the long term, it was even more successful allowing future presidents to mount (and lose) the same wars for generations. Disgraced ex-CIA director and retired general David Petraeus, still a fav on the talking heads circuit (and at Harvard) was quick to explain the phenomenon

“This [Afghanistan War] is a generational struggle. This is not something that is going to be won in a few years…We’ve been in Korea for 65 years… We were in Europe for a very long period of time…I think we should not approach this as a year-on-year mission…”

Besides giving the executive branch pre-emptive immunity for violations of international law (perpetual war), the executive monopoly on starting and never ending wars has enabled Congress to turn a blind eye to executive overreach and devote full time to their primary duty—raising money to keep their jobs.

As the only branch of government with the constitutional authority to “declare war” and “raise and support Armies” (Article 1, Section 8), Congress could shut down all U.S. wars by refusing to fund them. Instead it has never seen a defense authorization bill it wouldn’t pass at the same time that official declarations of war were becoming as extinct as dodo birds. Not that anyone really pays for America’s wars. It’s all smoke and mirrors, a classic scam. Congress votes to authorize the military budget and puts it on the U.S. credit card raising the national debt ever upward to its current $21.1 trillion which works out to every person living in the U.S. owing $64,497.

If there’s an anti-war politician left in Washington, will he or she please stand up. In the ever more rightward-leaning Congress, progressives are as scarce as hen’s teeth. The CPC (Congressional Progressive Caucus) that on paper at least, is committed “to “give voice to the needs and aspirations of all Americans and to build a more just and human society” reliably does neither.  For one thing, membership is far from robust. Out of 435 house members, 78 have signed the progressive pledge —a mere 18%. More dismal yet in the Senate only Bernie Sanders is an official member. Social issue liberals have anointed another senator Elizabeth Warren as a progressive in spirit although she’s never deigned to join the CPC.

Hanging their hats on progressive social credentials, Sanders and Warren have zero cred in the anti-war arena. Quite the contrary, both are adept at cold war rhetoric when U.S. foreign wars come up. Traveling in Asia recently, Warren sounded like a Trump apologist. Speaking about the US relationship to China (while she was in China), she declared that a diplomatic strategy toward China, was a non-starter “there are known areas where we are vigorous competitors and do not have shared interests.” The notion that China could integrate into the world peacefully “has been proven wrong.”  Then it was North Korea’s turn to feel the back of her hand. Appearing on Fox News (an odd choice for a reputed progressive) she decried the proposed sit down between Trump and Kim Jong-Un doing her best Dick Chaney imitation “We [the U.S.] have to say ‘You all have to be willing to open up so we can verify…If they’re not willing to do that [allow US full access to their military facilities] then they are not willing to take steps.”  That’s one hawkish progressive who probably isn’t about to put on a comfortable pair of shoes and march in an anti-war protest.

Next up Bernie Sanders, a self-styled democratic socialist (voting with the democratic caucus), who captured the hearts and minds of a wide swath of American liberals and progressives in 2016 with his support of universal health care. Problem is Bernie’s progressivism does a sharp U-turn when it comes to U.S. war-making. To his credit, he voted against the Iraq War (the one Hillary voted for) but, on the debit side, his reason — “I knew it would be a disaster.”  As with so many U.S. political leaders, peace isn’t the issue, losing is. Give him a strategy for a winning war and he’s hooked. In a dizzying series of contradictory votes, after opposing the Iraq war Bernie voted yes on funding it, ditto on funding the Afghanistan war, yes on a billion-dollar aid package to the illegitimate coup government in Ukraine and declared his support for Israel’s assault on Gaza joining with Elizabeth Warren “It is a moral imperative to *support and defend Israel.”

Hope for congressional support for the peace movement hovering around absolute zero, what about the executive branch? There’s always former president, Obama, whose campaign slogan, “hope and change” seemed to underlay his commitment to finding peaceful solutions to world chaos. Whatever hope and change was meant to signal (beyond a winning advertising slogan), it wasn’t peace. Soon after he moved into the Oval Office, he authorized a “surge” in Afghanistan sending more troops and more money in the fruitless search for something he could call victory. Law and order made its usual appearance on the Obama stage, jailing the empire’s truth tellers (aka whistle blowers) and giving jobs to the perpetrators — “The U.S. has never welcomed internal dissent and has always responded with force” (Jeremy Scahill). Obama’s domestic progressivism blinked green occasionally in support of same-sex marriage (better late than never) and in his second term stricter gun control. Obeisance to his masters, the wealthy and powerful including the NRA, occupied most of his first term. In 2010 he signed legislation giving Amtrak passengers the right to carry loaded guns on board and visitors to national parks the right to be “locked and loaded.” His progressive stance on climate change occurred after the devastating oil spill in the Gulf his Department of Energy helped create.  Despite being awarded the Nobel Peace Prize in 2009, he was no peacenik. Unable to find a war his military could win, he utilized a diplomatic alternative, threats on the order of “red lines and “all options on the table.” setting the table for Trump’s version of diplomacy — “Military solutions are now fully in place, locked and loaded, should North Korea act unwisely” 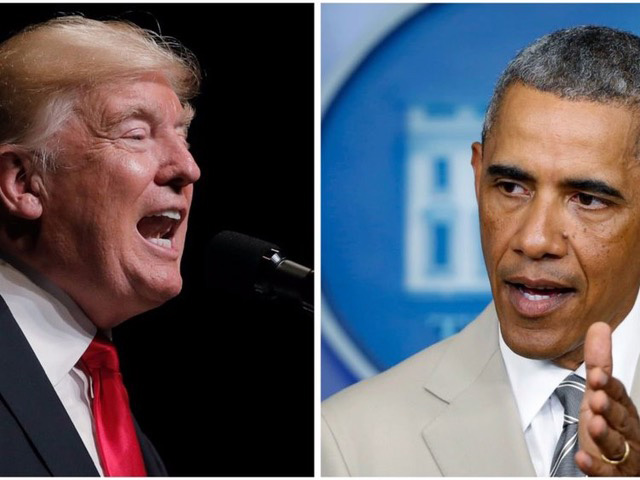 “Is there a limit to the military violence we are willing to participate in or support” (Jeremy Breicher in his resignation letter to Bernie Sanders). As people priding ourselves on the reach of our moral universe how much chaos and destruction, how many homeless refugees, how much famine and disease before we cry “No más”  Drawing on the lessons of recent history, the successful protest marches of the teachers in West Virginia and Oklahoma to fight for America’s kids, the no-quit street protests of the kids who survived the shooting in Parkland, FL to fight for gun control, give us hope for a new “coalition of the willing” to come forth and declare “We’ve had enough of war, of killing, of making sovereign nations into wastelands, of creating millions of refugees driven out of their countries and we’re going to do something.” The commitment to the anti-war movement is an arduous one, staring down “the greatest purveyor of violence in the world today.” Only the stalwart need apply.

“Every revolution is impossible the day before it happens and the day after it looks inevitable.” (quoted by Bill Ayres) 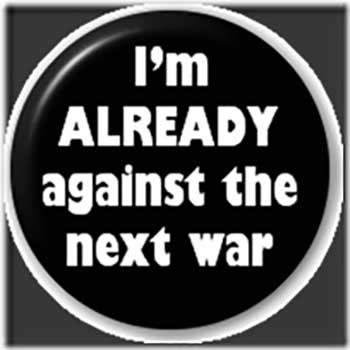