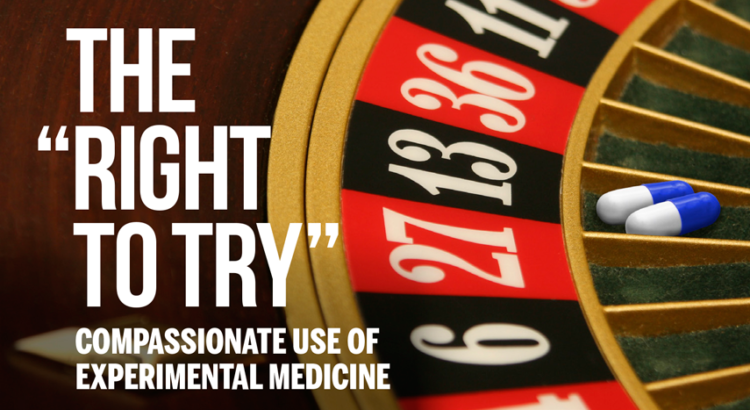 “We also believe that patients with terminal conditions should have access to experimental treatments that could potentially save their lives.

People who are terminally ill should not have to go from country to country to seek a cure — I want to give them a chance right here at home. It is time for the Congress to give these wonderful Americans the “right to try.”
– President Donald Trump State of the Union Address 1/30/2018

Not so fast Mr. President. In fact, almost unanimously critics of “Right to Try (RTT) legislation dismiss it as a feel good proposition with disastrous consequences. As one medical ethicist noted “The public has no idea that this is not a good thing. They know nothing about the bill except that the right-to-try sounds like a good thing.” A good thing maybe for the 1% but for desperate, terminally patients the devil is in the details. Among the most disastrous consequences: “Right to Try” laws allowing terminally ill patients the right to virtually untested and unapproved medications are no longer covered by insurance for hospice and home care after exercising their RTT “privilege.” In some states, patients using RTT therapies are not covered for unexpected side effects from the treatments and are liable to lose their insurance coverage for six months after using an untested medication. Need we add that most insurers will not cover RTT treatments which tend to be outrageously expensive even by drug industry standards so unless you’re a lottery winner, you’re likely to bankrupt yourself and your family chasing that elusive pot of gold.

If President Trump is cheerleading for RTT, you can bet the ranch that lots of his billionaire bros are benefitting. How and why are the questions Suspicious Angels answers in the post “Right to Try or Right to Die: Hijacking the FDA for Fun and Profit (originally published 9/22/2017).

See how President Trump’s claims for the life-saving propensities of Right to Try Laws compare to the outcomes of the patients who invoke them. Here’s how Public Citizen dissects the benefits: “[RTT laws are nothing more than] … false hope legislation … put[ting] countless patients at risk by dramatically undermining the FDA’s role in ensuring that medical products are safe and effective before they become widely used.”