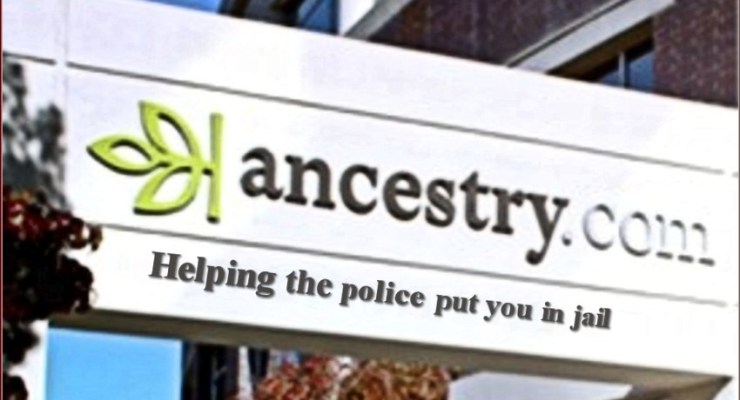 In 1996, a young woman was murdered in her apartment
in Idaho Falls, Idaho. Although police had the killer’s DNA
from the crime scene they were unable to match it to DNA
in any of their criminal databases. That is, until 2014, when
the police obtained a number of genetic matches from a
private lab (now owned by Ancestry.com) and focused
on one match as the likeliest. With a search warrant, they
obtained private information (name, address etc.) of their
person of interest (the son of the actual DNA match)
and he gave them a DNA sample. After two anxious
weeks, law enforcement determined that his
DNA did not match the killer’s.
He considered himself lucky.

You see the Ancestry.com ad on TV at the precise moment you are starting on the family genealogy tree. Look no further Ancestry.com at your service. Send them a DNA sample, $100 (plus $10 shipping), sign their consent form and, like magic, they’ll penetrate the secrets of your origins. Quick, easy…perfect. Hold on —in your eagerness to “unlock the secrets of your ancestry,” you’ll do what the vast majority of us do when asked to sign a consent form online — check the OK box without actually reading it. That’s works for getting on websites or clicking into the Starbucks Wi-Fi but when it comes to your most personal and private information the warning lights should start flashing.

Maybe you’re not a genealogy “nut,” but a woman with concerns about breast cancer. Your mother and sister have already fallen victim to the disease and you want to know if you have inherited an abnormal BRCA1 or BRCA2 gene which would greatly increase the odds of your contracting breast cancer. You decide to sign up with 23andMe, which bills itself as “a genetic testing and analysis” company. The first step in the process is your agreeing to the conditions of their consent form.  Believing it’s like all the other “consent” forms you sign to get new apps for your phone or to install new programs on your computer, you don’t bother to read it, but check the OK box.

Possibly you have more altruistic reasons for giving up your DNA to a private genetic database firm. You are keen to advance scientific research into a wide variety of deadly inherited diseases (Cystic Fibrosis, Duchenne Muscular Dystrophy, Huntington’s Disease) and want to be part of the search for a cure. You also check the OK box on the consent form. 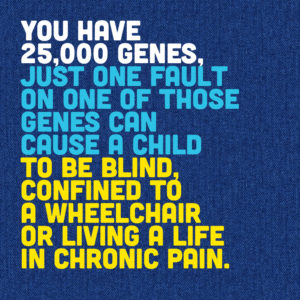 Or maybe you get carried away with a burning desire to save lives. A hospital that handles your routine health screenings and periodic blood tests sends you a letter asking for permission to access your DNA and add it to their DNA database bank. Okay you think, maybe it will be your DNA that finds a cure for cancer or some other horrible disease. Without thinking too much about it, you quickly agree. Which means putting an X in the OK box and signing the consent form. Whether you realize it or not you have just given the hospital permission to store your DNA in their DNA database permanently! 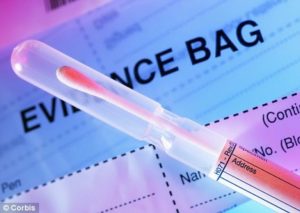 The Great Awakening comes when you find out what you’ve okayed. Both Ancestry.com and 23andMe inform you flat out that if served with a court order, they will turn your DNA over to law enforcement. Here’s how 23andMe’s “privacy” officer Kate Black explained her company’s policy on informing customers that their DNA is now in the possession of the police, FBI or CIA permanently: “In the event, we are required by law to make a disclosure, we will notify the affected customer…unless doing so would violate the law or a court order.” Translation whatever law enforcement wants, they get. If they don’t want you to know that your DNA now resides permanently on a law enforcement database, these companies won’t tell you. Period. Even worse, it’s not a consequence you could have predicted—who knew that “…signing up for 23andMe or Ancestry.com mean[t] that you and all of your current and future family members could become genetic criminal suspects…” (NYU Law professor, Erin Murphy).

Sending in your DNA to one of these private (unregulated by either the feds or states) DNA database companies is a real crap shoot. What’s at stake is not only your personal information but that of your entire family.  In a perfect world, you would be able to freely give such a company your DNA to find out where you came from or learn about your risk for inherited diseases without having to balance the importance of that information against the very real fear that your data will be shared with some branch of law enforcement without your consent and in many cases without you being aware that your information is no longer private. Michael Usry in the story beginning this article found out the hard way how demoralizing it is to be the cops’ chief suspect in a 20-year old murder on the basis of weak and inconclusive genetic matching and yet have no way to mount a defense. 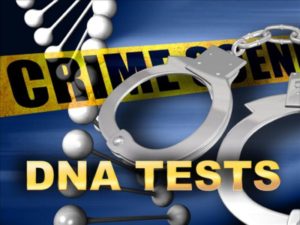 Although he was later cleared, his is a cautionary tale. The U.S., an empire besotted by war diminished by an executive branch no longer in civilian control, where diplomacy consists of hurling threats and imprecations against countries it doesn’t care for, where multiple intelligence agencies are falling over each other to build the biggest database of citizens’ private information, where Congress hands the military billions more than they asked for (with only 8 dissenting votes in the Senate, at last count there are 48 democratic senator, so much for the party of the people), but can’t agree on universal health care, fixing a broken infrastructure, or giving more aid to starving families.  In that environment, the mutual trust that in a different time existed between government and its citizens is irrevocably breached. The poisonous atmosphere emanating from Washington D.C. should make all of us think twice before we succumb to the easy promises of the DNA database companies. The danger, clear and present, is that Big Brother is looking over the shoulder of these companies. Thinking of relying on the judicial system? Of having your day in court? Not a prayer. Today, the U.S. judicial system is full of political appointees eager to go along, to get along, receptive to law enforcement’s perennial claim that they are “keeping us safe” and quick to issue a warrant allowing the government to troll through these databases on the flimsiest evidence while at the same time exonerating police officers who murder unarmed young African Americans. 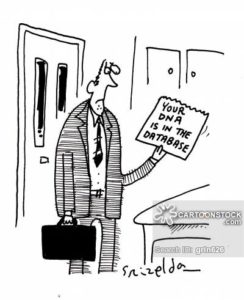 What’s at stake may well be your personal freedom. Ask Michael Usry how he felt during those two long weeks he was forced to endure the mindless suspicions of a law enforcement cabal on a wild goose chase to close, at any cost, an old unsolved murder. It’s a vicious tangle of circumstantial evidence, unreliable “touch” DNA (microscopic samples of DNA on physical surfaces often from multiple individuals), and incompetent or poorly trained forensic analysts whose zeal to catch the “bad guys” leads them to make faulty and damaging assessments.  In 2015, the San Francisco Chronicle outed one such analyst whose false testimony on DNA matches may have wrongly convicted over 1,000 defendants.

What can you do? One thing is certain. Resist the temptation to be swayed by the deceptive advertising of these DNA characters offering a one-stop shop for genealogical research. The liabilities of surrendering your DNA to these companies in return for information you can generate yourself with zero risk far outweigh the benefits. Genealogical research can be an intriguing journey—through census reports, birth and death records both locally and online, old hospital records, U.S. census reports, in cemeteries and among cemetery records, in old phone directories, city almanacs and other listings that U.S. towns and cities maintained before computers made such data collecting obsolete.  Ancestry.com can also be an invaluable resource. Opt out of their DNA money-making scheme, but take advantage of their huge database of names and family trees. For about $100 for six months of researching through their files, you’ll find a wealth of information on “lost” relatives. Finally, for a fun day trip, check out Ellis Island in New York to get the goods on the first of your family to enter the U.S.

Privacy, personal liberty, your civil rights — your DNA checks all the boxes.  As Jeremy Gruber, privacy advocate, warned in 2010 “Your DNA has serious information about you and your family.”  Counting on private companies’ and their internal security policies is like believing that the U.S. only fights wars of liberation, or that greedy corporate oligarchs are job creators or that corporations pay their fair share of federal taxes when in fact they pay only 11%, while the people pay 89%.

Get the word out. Make sure your friends and relatives know the risks of believing the happy talk they hear on TV. Send them a link to this article by hitting “send” or “share” at the bottom and this one (“How Private DNA Led Idaho Cops on a Wild Goose Chase and Linked an Innocent Man to a 20-year-old Murder Case”) Think of it as a public service with a private benefit — it could be your life and freedom on the line —

“Your relative’s DNA could turn you into a suspect.” (Wired)