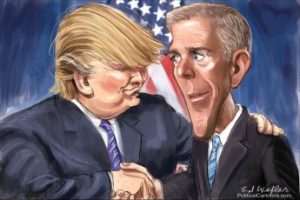 Updates to: Be Careful What You Wish For: More Magical Thinking in the Age of Trump/Gorsuch
“Magical Thinking: Supreme Court Justices and the Presidents Who Pick Them”

As the Supreme Court prepared to decamp for its summer hiatus, the flock of decisions they issued and the cases they agreed to hear in the Fall pretty much resolves the mystery surrounding the impact the Court’s newest appointee, Neil Gorsuch will have on future decisions. One thing is indisputable— everything is not coming up roses for progressives or even liberals

Since January 31, 2017, when Trump named Gorsuch as his pick to replace the late Antonin Scalia, the betting on where he would roost —with the extreme conservatives (Alito and Thomas) or the “centrist” conservatives (Roberts and Kennedy). The “paper of record” was betting that his “some of my best friends are gay” claim to fame augured well for the gay bloc. [Check out “Gorsuch Not Easy to Pigeonhole on Gay Rights, Friends Say,” NY Times]. Not so fast. Like their certainty that Saddam had WMDs, The Times got it wrong again. Throughout the Court’s latest appearance, Justice Gorsuch popped up in the dissent column when rights and freedoms were being upheld and in the majority when rights and freedoms were being pulled back or narrowed. 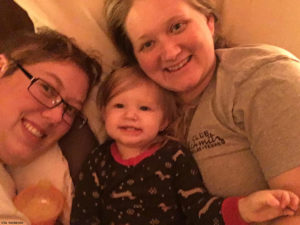 Gay rights were front and center In a case from Arkansas, Pavan v. Smith.  In a 6-3 majority, the Court overturned an Arkansas court’s ruling that precluded a same sex couple from having both their names on their child’s birth certificate. From the perspective of the three dissenting justices (Gorsuch, Thomas, Alito), the court’s ‘error’ was compounded by the way in which it was done — “summary reversal” (accepting the case and overturning the verdict of the lower court without requiring written briefs or oral arguments). The majority of the court based the Pavan decision on Obergefell v. Hodges, the landmark case that gave same sex couples the “fundamental right to marry,” ruling in Pavan “The state uses those [birth] certificates to give married parents…legal recognition…

Having made that choice, Arkansas may not consistent with Obergefell deny married same sex couples their recognition.”

Temperamentally and ideologically, Justice Gorsuch is immune to that line of reasoning. Along with his reliably right-wing buddies, Thomas and Alito, he defended the lower court’s ruling and chided his fellow justices for their hasty decision. “[Nothing] in today’s opinion purports to identify any constitutional problem with a biology-based birth registration regime. So…summary reversal would not exactly seem the obvious course.”

Justice Gorsuch’s dissent is further confirmation of the major role his narrow ideological beliefs will play in his decisions about basic constitutional rights. His dissent also illustrates the yawning 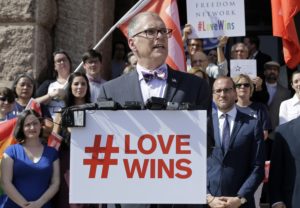 divide between his ultra-conservative judicial temperament and that of a centrist conservative like Justice Roberts who voted with the majority in this case although he dissented in Obergefell v. Hodges.

Some of Gorsuch’s best friends may be gay but his rulings are of the anti-gay rights, anti-gay marriage variety. Whether or not Gorsuch played a pivotal role, the court has decided to hear the case Masterpiece Cakeshop v. Colorado Civil Rights Commission, in which a Colorado Baker (self-described “cake artist”) refused to make a wedding cake for a gay couple based on his religious principles. 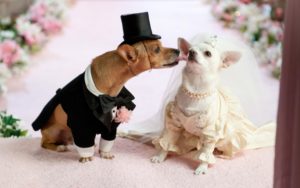 (Court pleadings reveal he had previously made a cake for a “marriage ceremony” between two dogs). In a provocative twist, when Scalia was on the bench, the Court refused to hear other cases on this issue.

In the traditional conservative quest to breach the wall between church and state, proponents have a good friend in Gorsuch. He and six other justices reversed a lower court decision and allowed taxpayer-funded grants to be used for playground repair at a church-run school. No doubt to salve their consciences, the decision included a footnote specifying the decision was only about playgrounds. Gorsuch and Thomas wanted the full Monty and wrote a separate opinion (concurrence) agreeing with the majority but arguing for full funding of religious schools. Two of the “liberal” justices, Sotomayor and Ginsburg dissented. In her written dissent, Sotomayor focused on what had once been the inviolable wall between church and state — “this case is about nothing less than the relationship between church and state. If you can fund the rubber stuff in playgrounds, why not the pews? Why not the stained-glass windows?”

This is not the first time Judge Gorsuch has taken religious “freedom” to the max. While a sitting judge on the U.S. Court of Appeals, he joined the majority in the Hobby Lobby case that upheld the right of a company to withhold reimbursement of contraception expenses from its employee health plan on freedom of religion grounds. (That decision was upheld by the Supreme Court)

To debunk assertions from some liberal commentators that Gorsuch was a closet liberal look no further than the Supreme Court’s decision to allow partial implementation of President Trump’s Muslim travel ban.  Gorsuch along with his blood brothers, Thomas and Alito, concurred but joined Thomas in supporting the entire ban: “I agree with the Court that the preliminary injunctions entered in these cases should be stayed, although I would stay them in full,”

During his Senate confirmation hearings, Gorsuch gave the impression that he was above ideological pressures or in the sway of any particular political belief — “I’m not going to say anything here that would give anybody any idea how I’d rule in any case…that could come before the Supreme Court.”  He refused to answer questions (and no Senator pressed him) on how he would rule on another of Trump’s major campaign promises— 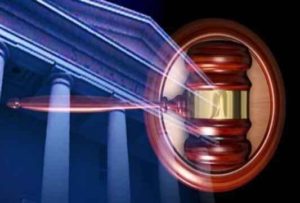 overturning Roe v. Wade (giving women the choice to terminate a pregnancy). In light of his right-wing positions in his debut appearance and  his opinion in the Hobby Lobby case that contraception devices “have the effect of destroying a fertilized egg,” child-bearing women have good reason to fear their decades-long right to choose may well hang in the balance. In a related development, should Gorsuch and the rest of the conservative justices succeed in defunding Planned Parenthood (which they appear to be chomping at the bit to do) they will in effect put abortions out of reach of women without the economic wherewithal to afford a private abortion.

The time for magical thinking has come and gone. Gorsuch has made the ideological bias of his opinion evident: from his vote to delay a verdict on the right of gay parents to appear on their child’s birth certificate (he lost that one), his appearance on the winning side in the church-state decision, and his vote to fully implement Trump’s travel ban (a stand-off). This fall he will be on the bench when a gerrymandering case out of Wisconsin is heard. The Court will decide how far a state can go in drawing district lines for elections to the House of Representatives to benefit one political party, in this case the Republicans. Put Gorsuch, Alito and Thomas on the side of Wisconsin and its Governor, Koch-funded Scott Walker. Roberts will probably join them, with the outcome resting on the centrist shoulders of Justice Kennedy, Gorsuch’s former boss and mentor. Not an outcome to gladden the hearts of either liberals or progressives.

Why are we so surprised that Gorsuch has acted the way those who supported him believed he would? Gorsuch was introduced to the Trump crew by the right-leaning Federalist Society and Heritage Foundation (Heritage being the same folks who thought up what became Obama’s free market solution to healthcare, the Affordable Care Act). Fulfilling one (and only one) campaign promise, Trump quickly fell in line with his conservative masters and chose Gorsuch. In the Senate, his nomination received a solid gold push from the Judicial Crisis Network, another right-wing think tank, that put their money ($10 million) where their preference lay. A little money spread around senatorial campaigns worked its usual magic — Gorsuch was confirmed 54-45. 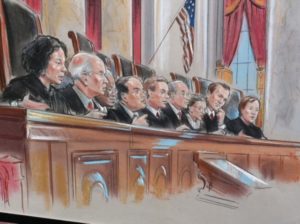 Putting on our Delphic Oracle cape, we are predicting a 5-4 bloc for moderately to extremely conservative outcomes on big ticket items that matter to large chunks of the population. Gay rights, abortion, affirmative action, gerrymandering, church-state issues —will all be on the court agenda in the next couple of sessions. Even before Gorsuch,  the Court had struck a major blow at the ADEA (Age Discrimination in Employment Act) by refusing to hear the case of a job seeker denied employment based on his age (he was 59). In Villareal v. Reyold’s, the Court ruled that the lower court was correct in dismissing the case based on limiting the protections of ADEA to employees not job seekers. With the addition of another hardliner to the Court, look for more narrowing of regulations designed to protect the elderly, the sick, he poor, and the middle class.

To forestall the fulfillment of the conservatives’ bucket list, (repeal of Roe among other conservative wet dreams), Vince Warren, Executive Director of the Center for Constitutional Rights, counsels a “do as little as possible” approach: “Our strategies now have to be designed around trying to keep some of these cases out of the Supreme Court, if humanly possible… you have to change your strategies about litigating your cases in lower courts, probably taking less than what you might ultimately want, in order to avoid it… getting up into the higher courts and becoming just a disaster for the entire country.”

Presidents come and go as do Senators and Representatives. Only the judiciary has a life-time lock on its position. This was originally thought to be the way to keep judges above the fray, not beholden to fickle electorates who might get in the way of their objectivity and impartiality. If that was ever true, over 200 years later, the courtroom has become a political space where justices’ ideologies condition their objectivity, presidents select judges not for their adherence to the rule of law but for their fidelity to their campaign promises, and a cowardly Senate is reluctant to ask appointees the hard questions and demand straightforward answers,

Here’s a thought. While the push for a Constitutional Convention to do away with the electoral college gains momentum, might we not seize the opportunity to address Article III, Section 1 — the Judges…shall hold their office during good Behaviour…[in effect permanently]. Judges who can’t count on life-time employment might find their way back to objectivity and impartiality. While we’re at it, let’s hold our Senators’ (unlike the court they have a job only if we vote them in) feet to the fire and demand real hearings with real questions and real answers. It’s time for the senate to take an unaccustomed position —in the driver’s seat at confirmation hearings. 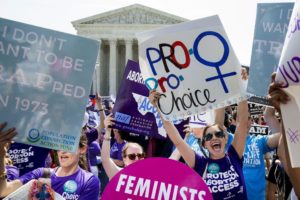 Only time will tell how a right-wing ideologue like Gorsuch joining two and possibly three others of a similar bent will affect the rights and freedom we take for granted. One thing is certain —if Trump has the opportunity to appoint another Justice (Ginsburg – age 84; Kennedy – age 81; Breyer – 79) progressives and liberals better make sure their passports are up-to-date.

***If you missed SA’s report on Robert Mueller’s checkered past, check it out HERE

***If you missed if you missed the lead-up to Gorsuch’s confirmation check out SA’s two previous articles on the Supreme Court,  “Magical Thinking: Supreme Court Justices and the Presidents Who Pick Them,” and our initial take on Justice Gorsuch (hint: we were “wishin’ and hopin’ and thinkin’ and prayin’”) “Be Careful What You Wish For: More Magical Thinking in the Age of Trump/Gorsuch”