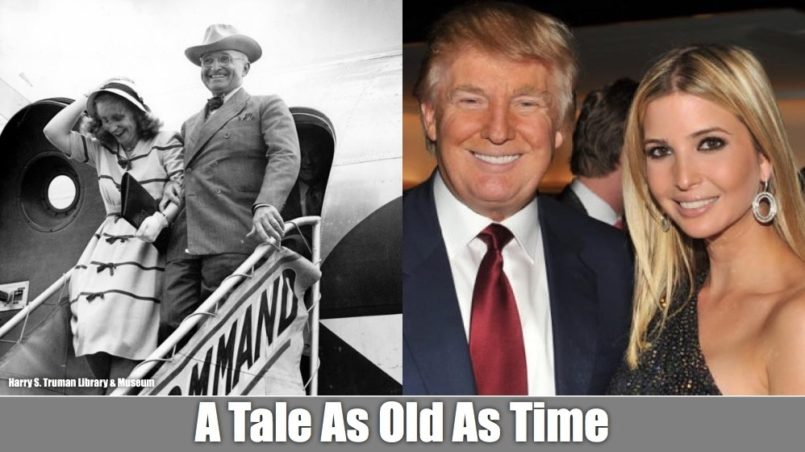 Beware the doting father defending his daughter from naysayers. Remember the kerfuffle stirred up a while ago when President Trump took to Twitter to excoriate Nordstrom’s department store for their decision to drop his daughter, Ivanka’s, clothing line. “My daughter has been treated unfairly by Nordstrom’s. She is a great person —always pushing me to do the right thing! Terrible! (2/8/2017)

As you might recall, Trump was widely criticized for what much of the mainstream media considered an unforgivable display of unpresidential behavior. The tut-tuting reached epidemic proportions when one of his surrogates doubled down on his remarks on Fox & Friends —I do find it ironic that you’ve got some executives all over the internet bragging about what they’ve done to her and her line, and yet they’re using the most prominent woman in Donald Trump’s [administration]… who has been a champion for women empowerment, women in the workplace to get to him. Go buy Ivanka’s stuff.”

Outrageous, right? Not so fast. There’s something about fathers and daughters that’s ageless.

December 6, 1950 finds Harry Truman reading his daily copy of the Washington Post and discovering a review of his daughter’s singing recital by the Post music critic, Paul Hume. What he read infuriated him. Although Hume pronounced Margaret Truman “extremely attractive,” he was much less enamoured of her vocal abilities: “Yet Miss Truman cannot sing very well. She is flat a good deal of the time — more so last night than at any time we have heard her in past years. There are few moments during her recital when one can relax and feel confident that she will make her goal, which is the end of the song,”

Furious at this insult to his beloved daughter, Truman wrote a letter (Twitter was over a half century away) to the hapless critic comparing him to conservative columnist Westbrook Pegler, whom he had previously described as a “rat” for opposing the New Deal and labor unions— “I’ve just read your lousy review of Margaret’s concert. I’ve come to the conclusion that you are an ‘eight ulcer man on four ulcer pay. It seems to me that you are a frustrated old man (Hume was 34 years old) who wishes he could have been successful. When you write such poppy-cock…it shows… that you’re off the beam and at least four of your ulcers are at work. Some day I hope to meet you. When that happens, you’ll need a new nose, a lot of beefsteak for black eyes and perhaps a supporter below (Truman was 66 in 1950). [Westbrook] Pegler, a gutter snipe, is a gentleman alongside you. I hope you’ll accept that statement as a worse insult than a reflection on your ancestry.”

Funny, none of Truman’s contemporaries thought his diatribe against a music critic a matter of “serious impropriety” or “culturally and politically problematic”— accusations leveled at Trump for his defense of his daughter. To a few Truman’s letter was considered a little “unseemly.” Some were quick to point out that America was in the middle of the Korean War, the Russians had exploded their first atomic bomb and the president was busy venting his spleen on the Washington Post music critic. Sound familiar? In his defense, Truman pointed out that he wrote the letter as a loving father and not as the president.

Let’s hear it for the good old days.