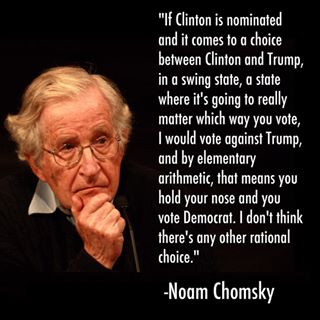 Hold Your Nose and Vote For….

Remember when all the intellectual liberals and democratic elites shook their fingers under our noses and solemnly predicted that the sky would fall if we didn’t “hold our nose and vote for Clinton?” A lot of people listened — to the first part of the message. They held their noses and voted for — Trump. Strange, considering the polls conducted within days of the election were unanimous on one point: 60 to 80% of those polled did not like Trump.

What happened? Depends on whom you ask. If you ask HRC, her defeat can be laid at the door of the FBI director’s decision to publicize his renewed interest in the Clinton e-mails eleven days before the election. After airing that bombshell, he beat a hasty retreat a few days later when a storm of bipartisan elite indignation rained down on his head. Not good enough, Clintonistas claim, it only compounded her electoral slide. If that excuse doesn’t wash— how about Bernie for 2016 election bogeyman? Harkening back to 2000, when Ralph Nader assumed the mantle of spoiler, even though there was nothing left to spoil after the two man wrecking crew of Clinton and Gore. (For further elucidation, read “Why Democrats Need to Get off the Blame Nader Kick” in SA’s October issue). Despite Bernie’s back flip in a desperate  bid to get back into the party’s (make that the wealthy pols, the financial and corporate elites and political bosses who control today’s democratic party) good graces, when it comes to scapegoating time, no quisling, even a reformed one, is safe.

State-run media is cooking up some pretty complicated (and convoluted) reasons for Clinton’s electoral swoon. As are pundits and “chatterers” on all sides of the political spectrum, e.g. “The Liberals Gave us Trump…” (Chris Hedges); “How Electoral College Cheats Democracy” (Daniel Lazare); “A Victory for White America” (Daniel Maguire); “Clinton Blames FBI Director for her Defeat” (New York Times). If we forego the “pie in the sky” explanations and consider “just the facts,” an alternate explanation emerges—to paraphrase an old Clinton meme, it’s the what stupid, not the who. In 2016, voters were running and what they ran from and where they ran to are the keys.

The stampede away from the democratic party didn’t begin with the recognition of how unfathomable the economy has become for most Americans — income inequality being the tip of the iceberg. A lot of history goes into the growing disaffection — the party that brought Americans social security, the minimum wage and Medicare left that heritage in the rear view mirror and transmogrified into the neo-liberal sanctuary of wealthy corporate CEOs, financial elites, and billionaires without a conscience. When it comes to the republicans, it was more — much more — of the same. The legacy of the last sixteen years is a dirge in red for those below the top rung of the ladder stuck in contingent, benefit-free jobs, millennials with a crushing load of debt, over 6 million seniors with zero savings thanks to QE and zero interest rates and a rhapsody in green for corporations whose profits have doubled in the last seven years, for shareholders and investors vacuuming up more than $5 trillion in stock buybacks and dividends and will get another $3.4 trillion pay day with the 2012-2013 Obama-inspired extension of the Bush tax cuts for another ten years.

Let’s look at some of the more dismal effects of living in America below the millionaire class: Struggling under $1.3 trillion of students loans (average $35,000 for 43 million young Americans) and looking in vain for a job that isn’t contingent, benefit-free, part-time or in the gig economy (e.g. Uber), one-third of the 18-35 crowd are living at home. For the working class, things have gone beyond dismal to deplorable. Gouged by the drug companies ($600 for two EpiPens, $69 for the same product in England), seeing their health insurance premiums skyrocket anywhere from 25% to a stunning 116% (midlevel plans on the Arizona marketplace) and sick to death of globalization that promised so much and wound up stealing their jobs, eliminating wage increases, creating low paid, temporary, contract jobs mainly in the service industry with no path to permanent employment.

Forget the pretty words (“the dreamers”) and feel-good sentiments, Latinos, a core democratic voting block, have been deported by the self-identified “champion in chief” of immigration reform in record numbers (2.5 million up to 2015), deportation numbers unmatched by any past administration (George Bush deported just over 2 million) and surpasses the total for all twentieth century presidents.  (ABC News). African Americans, too, have come in for their share of pain under the first black president. Inner city America has been the hunting ground for a militarized police force whose law enforcement credo starts and ends in violence.

Combine the ingredients mentioned above with an unhealthy dose of unchecked fracking poisoning our water and air, an infrastructure slowly rotting to its core, corporations stashing over $2 trillion overseas to avoid taxes leaving ordinary Americans to fill the gap and what do you get? Beleaguered Americans of all stripes rushing to exist, at least temporarily, a democratic party that has traveled light years away from its roots as the “party of the people.”

Staking her presidential hopes on the previous administration, Clinton disregarded the sour mood of her core constituencies. If the pundits were correct, low voter turnout would help Trump and hurt Clinton. Preliminary numbers peg the turnout at 55%, the lowest in sixteen years. Advantage Trump. Lack of turnout was not the only failing of this doomed campaign. She lost crucial majorities that she needed and that put Obama over the top among Blacks, Latinos young voters (18-29) and the white working class. Among Blacks, she lost 7% of the votes Obama received in 2012, 5% of the Latino vote and 6% of the youth vote. Apparently a lot of African American, Laino, and young voters took the late Ed Brown’s (long time Black activist) advice —“The view is that blacks [ditto for Latinos and young people] have nowhere else to go but blacks always have somewhere to go — they can go fishing.” Low turn out among African Americans may have cost HRC important and expected wins in battleground states like Ohio, Michigan, and Wisconsin. A combination of factors spelled defeat in Pennsylvania — the increase in white voter turn out in rural counties along with the loss of Black support in the cities. The writing on the wall became clearer and clearer as election night progressed.

Above all, Clinton’s presidential hopes crashed and burned in the manufacturing arc from Pennsylvania to Wisconsin —states that have seen decent, well paid, full time manufacturing jobs go up in smoke, factories abandoned and aided by Bush-Obama tax policies relocated to Mexico, Canada, China, and other low-wage areas, the remaining jobs subject to the two tier wage system where new hires get up to fifty percent less compensation for the same jobs.

Now that we have an idea of what the voters were running from, the really big question is what they were running to. Nothing specific, it appears, but the change they counted on Obama bringing in 2008, and doubling down on that hope in 2012. By 2016, they were through hoping and believing, tired of the corporate neo-liberal elites who had made the democratic party their stamping ground, and paid little more than lip service every four years to the cries for help from Main Street. Despite the warts on his character that the democrats gleefully pointed out, voters went with their gut and voted for Trump.

Most startling of all was the size of Trump’s coat tails completing what had been a work in progress — the virtual disappearance of a meaningful democratic presence in key federal and state bodies: the House went from 257 sitting democrats in 2008 to 194 in 2016, the Senate from a filibuster-proof majority in 2008 to minority status, governorships from 29 in 2008 to 17 in 2016, and the control of state legislatures from 60 (of 99) in 2008 to 30 in 2016.

Clearly the voters were calling for a sea change. Out with the political elites of both parties. Trump was their golden boy. He didn’t spend a lot of money on ads, the media was openly contemptuous of him, his ground game was virtually non-existent, his twitter remarks horrendous, his convention speech forgettable, disclosures of past indiscretions monumental and the voters elected him anyway. They got his message: “What have you got to lose by voting for me?” For those who have seen the top-earning Americans shovel up 95% of the income gains in the last six years while 81% of Americans are worse off now than they were a decade ago, (Poorer Than Their Parents, A McKinsey study) the answer was a vote for Trump.

Will Trump bring these disaffected voters the change they think they deserve? Only time will tell. Stay tuned to SA for our take on whether a country where free markets are king and privilege, power and wealth determine the economic and social food chain can ever really satisfy the needs of those neither privileged, wealthy or powerful.

As for HRC, she spoke her own epitaph. After setting in motion the catastrophic Libyan bombing raids that reduced a prosperous African county to rubble and led to the murder of its legitimate leader, she pronounced the words that will forever define her character — “we came, we saw, he died” and her defeat — we came, they saw, we lost.

(NOTE: For a pre-election peek at why the African American vote was critical to Clinton’s presidential hopes and how hard she maneuvered to get it, check out “Eyes on the Prize: Hillary 2016 in the February issue)