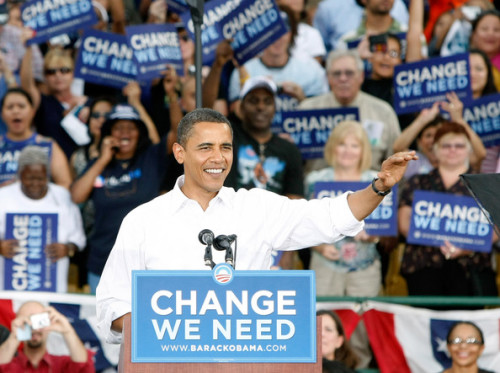 In this short story, we pay homage to an Obama volunteer. No one special, not a heavy roller, not a paid pro, not part of the inner circle, just an ordinary Josephine who was the quintessential pigeon in the Obama shell game. How many tens of thousands of Josephines did Obama use and abuse? Their only sin— believing that the Second Coming had actually arrived. Hope persisted, long after reality took a huge bite out of the fantasy. See if you recognize her.

She always volunteered to carry the sign. It was awfully heavy.  She didn’t mind.  They could count on her.  First in line, holding it up and shouting his name.  They teased her about her devotion.  She didn’t mind.  She loved him.  Things would change when he took over.  He promised.  She knew he’d keep his promises.

Life would be good again.

It wouldn’t be so easy if she had a job. A long time now.  Savings going fast.  Pray every night she wouldn’t get sick.  Sometimes mama got really nasty.  Talked about daddy.  Worked every day.  Never got sick.  He didn’t lose his job.  Brought his pay home every week. To her.  In a little brown envelope.  Every week.  Didn’t believe in government poking its nose into his private business.  Writing out checks to people who weren’t earning the salt on their potato.

Never dreamed her own daughter.

Hard to get mad at mama. She always believed what daddy told her.  Daddy hated the government.  When she was a little girl, daddy would have meetings in the parlor.  The room they never used.  Except for daddy’s meetings.

She didn’t like the men who came. She knew mama worried about the money daddy spent for liquor.

She didn’t say anything.

The police came the night the gun went off. Daddy was angry.  An accident he kept telling them.

Mama and daddy had a terrible argument. That was the last meeting she remembered.

When daddy died, mama got his social security.

Sometimes mama gave her $5.00. Thank God for the little she saved.  Never told mama when they gave her a raise.  Saved it for herself.

That would all change when he took over.

She still bought the paper. Told herself she needed to read every speech he gave.  Made her feel better.  So much to do.  He was young and enthusiastic.  She could tell he was very smart.  The way he put things.  The way he knew about how hard it was for her.

The day he came to town they let her stand up front. He saw her.  Looked right at her.  Talking about her getting her job back.  It was like they were having a conversation.  He wasn’t like the others.  Making vague promises.  She couldn’t count on them.  Never knew if they were telling the truth.  Politicians.  Always lying.

They went to the same bar. The ones she used to work with.  Knew it was tough for her.  Whenever she went, they insisted on paying for her beer.  Tough having everyone know you were down on your luck.  Even mama knew where she was going.  Reminding her daddy never accepted charity.  Not from his friends.  Not from the government.  What would he say? That filthy bar.

Mama was old. She and daddy didn’t have friends.  Didn’t need them.  Not worth it.  Always wound up wanting to borrow money.

Mama didn’t understand. If they were real friends, they wouldn’t have jobs either.  Would they?

They didn’t believe her. He wasn’t going to change the world.  A politician like all the others.  They thought she was crazy to waste her time ringing doorbells for him.

Look for a job. Any job.

She stopped going to the bar.

It was getting closer to the big day. She was out all day working for him.

To help him change the world.

She and mama watched on television. Watched him make his victory speech.  Introduce his wife.  She wasn’t sure about her.  Looked like all the other wives.  Then the children.  Children were always adorable.  She knew he meant it when he said he didn’t want his kids to grow up in a screwed up world.

Winning didn’t change him. He was the man she had fallen in love with.

It was going to be different. Wait and see.  She wanted mama to believe her.  To believe in him.  He needed them to believe.  That’s what he said.  He couldn’t do it without them.  The ones who believed in him from the start.

Mama looked at her like she was a stranger. Laughed at some joke she couldn’t hear.

Poor mama. She wasn’t herself these days.

The next night she went to the bar.   Different tonight.  The mail room guy wasn’t telling any of those awful jokes.  When she ordered her beer, no one offered to pay for it.

Sending the new machines to Mexico. A matter of time.

No need to be afraid. He wouldn’t let it happen.  Now he had the power to stop it.  She was going to get her job back.  They wouldn’t lose theirs.

They didn’t believe her.

She didn’t stay long. Wait and see.  Good things would happen.  Once he took over.  Then she’d come back.  Not to gloat.  She’d never do that.  They’d thank her of course.  She’d be part of the group again.  Maybe even get her old job back.

He practically promised her. She could tell he was an honorable man.  He wouldn’t ignore people like her who worked so hard to get him the job.

Her mother didn’t agree. Not at all.  Sometimes she’d catch mama looking at her the tears rolling down her cheeks.  Mama didn’t talk much anymore.  The doctor said it was her disease.

She wasn’t so sure.

Things would get better when he won. Started doing the things he talked about.  She knew them by heart.  Mama would get better.  Talk again and make dinner for the two of them.  Like it used to be.

There wasn’t anything wrong that couldn’t be fixed. Mama was tired.  She’d worked hard all her life.

She always volunteered to carry the sign. It was awfully heavy.  She didn’t mind.  They could count on her.  First in line, holding it up and shouting his name.  They teased her about her devotion.  She didn’t mind.  She loved him.  Things would change when he took over.  He promised.  She knew he’d keep his promises.

He really tried. Didn’t know how strong his enemies were until he won.  Wouldn’t let him do the things he wanted to.  The things he promised.

It would be different this time. He knew what he was up against.  He’d do it this time.  He wouldn’t let those two little kids down.  That’s what he said and she believed him.  With all her heart.

It hadn’t been easy since Mama passed. Thank God she had a roof over her head.  Mama saw to that.  The part time job came just in time.   Mama’s insurance policy was another surprise.  She never knew mama had life insurance.  Mama must have paid for it with her money.  If she had known.  Would have given it gladly.

Why didn’t mama tell her? She never understood her mother.

Too bad mama wouldn’t be around to see she was right. Her friends too. When he got things going again.  When she got her job back.  Her friends would get theirs back.  They’d forgive her.  Once they were working again.  Even if they didn’t vote for him.  He’d help everybody.  That’s the kind of man he was.

Maybe she’d ring a few doorbells this afternoon. If she wasn’t too tired.